Random Convergence, Defamation and the Subpoena 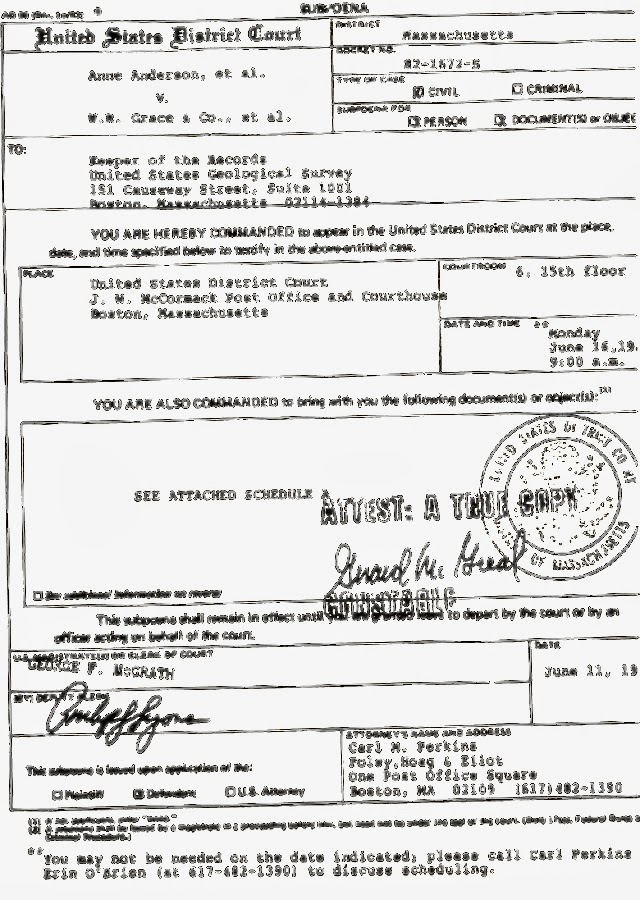 
is the plaintiff in a case pending in federal court in Colorado (the `Colorado Action’). There, ACT sued ten John Doe defendants based on allegedly defamatory comments posted anonymously on `Random Convergence,’ an internet blog administered by Daniel Drasin, located at http:// randomconvergence.blogspot.com/ (the `Blog’).


In particular, ACT lodged claims for `trade libel/commercial disparagement’; violations of Section 43(a) of the Lanham Act, 15 U.S. Code § 1125(a); and violations of the Colorado Consumer Protection Act, Colorado Revised Statutes § 6–1–105. . . . Drasin is not a party in the Colorado Action.


As to the substance of the lawsuit, the opinion explains that ACT is a


`career guidance service firm that assists job seekers throughout their job search.’ See Complaint ¶ 7. It `assist[s] clients in developing a marketing plan that acts as a road map for the clients' job search, identifying the client's strengths and skills while providing solutions for any weaknesses, and locating industry options and opportunities in an effort to maximize the client's chances of securing gainful employment.’ Id.


As noted, Drasin is the administrator of a blog known as Random Convergence. See Affidavit of Robert J. Gerberg, Jr., President & Chief Executive Officer of ACT, ¶ 9 (`Gerberg Aff.,’ ECF 6–4). According to ACT, Drasin exercises editorial control over the blog. Id. Since approximately 2007, individuals have posted over 350 anonymous comments on Random Convergence, many of which disparage ACT's services. See id. ¶¶ 11, 17; Opp. Exh. C at 16 (ECF 6–3) (screen prints of posts and comments about ACT on Random Convergence).


ACT claims the anonymous postings are `a sophisticated and coordinated campaign’ intended to `damage ACT's business and reputation.’ . . . In its view, `[t]he entries on Random Convergence are designed to maximize the effect of the blog by sending spam and driving up the blog's rankings and visibility in the search engine Google.’ Gerberg Aff. ¶ 15. ACT reports it has `received numerous emails from potential or current clients stating that because of the blog, they will no longer be using ACT services.’ Id. ¶ 27. Additionally, ACT claims it has `asked to post comments on the Random Convergence Blog to rebut some of the false statements, but Mr. Drasin refused these requests.’ Id. ¶ 32.


U.S. Magistrate Judge Mix authorized expedited discovery and granted ACT's motion for leave to serve third party subpoenas on Drasin. As noted, two subpoenas were previously issued to Drasin by this Court. They commanded him, in his individual capacity and as administrator of the Random Convergence blog, to produce the`“true name, address, telephone number, e-mail address, and Media Access Control address of each of the ten Doe Defendants,’ based on `the IP [Internet Protocol] addresses from which they posted and edited posts about [ACT] and its employees.’ . . .


`[w]hen someone wishes to post a comment on Random Convergence, he or she fills out a form on the blogger website and then posts his or her comments. The poster can optionally sign the post with a Google e-account-name, an email address, an OpenId, a free-form name or URL, or simply `Anonymous.’


`If any of the non-anonymous options are used, the comment will appear on the blog with the comment beginning as follows: “


The judge also noted that Drasin


further advised that most individuals who posted comments on the Blog did so anonymously, and he explained that he had no records of those who chose to remain anonymous. . . . Drasin did, however, provide the information he possessed about the commenters who had not posted anonymously, all of which appears to be information that would be available to anyone who visits the Blog. . . .

The letter concluded . . . : `In short, we have provided you with all the relevant information that Mr. Drasin has with respect to your discovery requests, and I assume that this matter is now closed with respect to him.’


ACT responded with a letter in which, among other things, it


expressed ACT's belief that Drasin has the information ACT requested because Drasin `utilized a program known as “Sitemeter” which, among other things, tracks and records the IP address of every person and computer which posted or commented on the Random Convergence blog.’


In re Subpoena of Daniel Drasin, supra.  Drasin’s lawyer responded and he confirmed


Drasin has an account with Site Meter, and he advised ACT that Drasin `is amenable to providing [ACT] with an authorization so that [ACT] can access [Site Meter's] records.’ . . . He concluded: `Mr. Drasin denies that he has done anything improper. If you have facts to the contrary, please provide them. Otherwise, I assume that this exercise is a fishing expedition and would remind you of your obligations to the Court.’ . . .


The parties continued to negotiate about these matters, a process which culminated on December 10, 2013, when Judge Mix authorized ACT to “serve an additional . . . third-party subpoena for the `limited purpose of ascertaining the ten Doe Defendants' personally identifiable information.’” In re Subpoena of Daniel Drasin, supra.  He also ordered that the


`subpoena shall be limited to the production of any hard drives, servers, and any other devices used by Mr. Drasin to administer the Random Convergence B log and data stored online via website or application. Plaintiff may make a forensic copy of the data on each device and may conduct an appropriate forensic examination of the data to ascertain the information sought by Plaintiffs original subpoena. Plaintiff shall return any hard drive, server, or other device produced by Mr. Drasin within thirty (30) days of production of said devices.’


In re Subpoena of Daniel Drasin, supra (emphasis in the original).


ACT responded that it had issued a subpoena to Site Meter, but that it would not `give up on seeking the forensic examination.’ . . . On January 21, 2014, Site Meter filed numerous objections to the third-party subpoena it had been issued and then advised ACT that it had `no responsive documents in its possession, custody, or control. . . .’


Actually, she found that the subpoena imposed


two types of burden on Drasin. First, in order to comply with the subpoena, Drasin must surrender his personal hard drives to ACT for up to thirty days. Personal computers generally cannot function without their hard drives, so this requirement would force Drasin to spend up to thirty days without the use of his personal computer. . . .  In today's technology-dependent world, this burden is significant. Second, forcing Drasin to surrender his hard drives to ACT would give ACT access to Drasin's personal files.


As to the first issue, she noted that ACT “has not provided any evidence, beyond its own unsupported conjecture, that Drasin's response was untruthful, incomplete, or inadequate.”  In re Subpoena of Daniel Drasin, supra.  In other words, ACT had not shown there was any reason to believe relevant evidence would be found on Drasin’s hard drives.  As to that, the judge explained that


ACT also suggests Drasin must be withholding relevant information because `if Mr. Drasin really possessed as little information as he claimed, why did he spend so much time and money fighting the subpoena in the first place?’ Status Report at 2. However, just as juries are instructed not to draw negative inferences from evidentiary objections, the Court will not infer mendacity from Drasin's decision to exercise his legal right under Federal Rule of Civil Procedure Rule 45 . to object to the subpoenas.


In sum, it appears from the record that very little benefit, if any, will result from the Subpoena. ACT has not proffered any credible reason for the Court to disbelieve Drasin's contention that he does not have the information sought by ACT.


As to the other burden, she explained that


Requiring Drasin to grant ACT access to this personal information certainly constitutes a burden. . . . Magistrate Judge Mix's order prohibits ACT from using Drasin's personal information for any reason other than to protect its own rights in the Colorado Action, but even a limited invasion of one's privacy is still an invasion.


These burdens are particularly troubling considering that Drasin has not been accused of any illegality, nor is he a defendant in the Colorado Action. Rather, he is merely the administrator of a blog on which other individuals posted allegedly defamatory comments.


Finally, she noted that while


ACT was unable to obtain the requested information from Site Meter. But, the information it seeks is available from at least one other source: Google. Indeed, ACT's motivation for subpoenaing hard drives and servers owned by Drasin is curious because, as ACT acknowledges, . . . Random Convergence blog is hosted by Google, and not on a hard drive or server owned by Drasin.


The judge also explained that the


She therefore granted Drasin’s motion to quash the subpoena.  In re Subpoena of Daniel Drasin, supra.
Posted by Susan Brenner at 8:15 AM