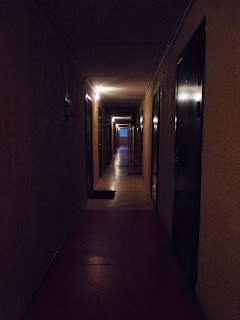 signed back on to the P2P file sharing program and saw that boyforboys1 was logged in and sharing child pornography. . . . Several hours later, [he] returned to Apartment 242 and observed that `CK’ and `bootycop’ devices were both at that time, accessing Apartment 242's network. . . . `CK’ then disconnected, while `bootycop’ stayed connected, with boyforboys 1 still logged into the P2P file sharing program. . . .

Phirippidis used the Moocherhunter software program to ascertain the physical location of the bootycop device. . . . He took `numerous signal strength readings at various locations within Apartment 242 and Apartment 240,’ which was vacant and entered with the consent of the building manager. Based on the readings, the agent determined the most likely location of the `bootycop’ device was Apartment 243. . . .


The opinion then explains that an “FBI investigative report, submitted with the government's opposition” to Norris’ motion, described Moocherhunter as


`MOOCHERHUNTER does not collect packets of data, it only displays the number of packets encountered and the signal strength of each.’


In his motion to suppress, Norris argued that “the government's use of Moocherhunter software to detect [his] Internet transmissions constituted a warrantless search in violation of [his] 4th Amendment rights.”  U.S. v. Norris, supra.  As Wikipedia notes, and as I have noted in prior posts, the 4th Amendment to the U.S. Constitution creates a right to be free from “unreasonable” searches and seizures.  As Wikipedia also explains, and as I have also noted in prior posts, under the Supreme Court’s decision in Katz v. U.S., 389 U.S. 347 (1967), a 4th Amendment “search” occurs when police intrudes into an area in which a person (i) has a subjective expectation of privacy (i.e., he or she believed the area was private) and (ii) society accepts that expectation as objectively reasonable (i.e., the court finds that most people would also think it was private).


Here, the prosecution argued that “there was no violation of [Norris’] 4th Amendment rights because there was no trespass onto [his] property, and [Norris] had no reasonable expectation of privacy in the signals transmitted through his neighbor's wireless internet connection.” U.S. v. Norris, supra.  The judge took up the issues in that order.


As to trespass, Norris argued that using Moocherhunter to


`sniff the air waves coming from inside Norris' bedroom, to discover the location of a computer inside his bedroom that otherwise could not have been seen without actually being in the home, intrudes into areas of his home that he has a reasonable expectation of privacy will not be trespassed.’ . . . The government contends no trespass occurred as the Moocherhunter was only `passively’ detecting Internet traffic coming from [Norris’] home.


The judge agreed with the prosecution, explaining that Norris


relies heavily on the recent case of Florida v.Jardines, 133 S.Ct. 1409 (2013). In Jardines, the police used a drug-sniffing dog on a suspect's front porch without a search warrant. . . . The Court held this use was a search, explaining that the front porch `is the classic exemplar of an area adjacent to the home’ and is considered the home's `curtilage,’ which has been widely protected by the 4th Amendment. . . . By using the drug-sniffing dog in this area, the police made an unwarranted physical intrusion. . . .


In this case, however, law enforcement made no physical intrusion into [Norris’] property or anything equivalent to the curtilage; rather, agents obtained permission to use Moocherhunter only passively while standing with permission in other apartments or in common areas. . . . Thus, no physical trespass onto [his] property occurred.


The judge began her analysis by explaining that in the Katz case, cited above, the Supreme Court held that Katz had a reasonable expectation of privacy in a conversation he had while he was in a phone booth because (i) he believed the conversation was private (that being part of the function of a phone booth) and (ii) society accepted that belief as objectively reasonable because that was part of the reason for putting doors on phone booths.  U.S. v. Norris, supra.


pen register to record the phone numbers a suspect dialed on his telephone, without a warrant, was not a violation of the 4th Amendment.  Smith v. Maryland, supra. The Court reasoned, `petitioner voluntarily conveyed numerical information to the telephone company and “exposed” that information to its equipment in the ordinary course of business. In so doing, [he] assumed the risk that the company would reveal to police the numbers he dialed.’ Smith v. Maryland, supra.  In Smith, the Court distinguished Katz based on the fact that unlike the listening device used by the authorities in Katz, pen registers do not obtain the contents of the conversations.


The judge then found that


[h]ere, the use of Moocherhunter is more analogous to the use of the pen register in Smith than the listening device used in Katz, in that Moocherhunter does not capture the contents of the target user's Internet activity, only the strength of the target signal. . . . [Norris] had no expectation of privacy when he initiated a wireless signal from his computer to the wireless router located in Apartment 242, as he `assumed the risk’ his information would be conveyed to law enforcement by Apartment 242's occupants.


U.S. v. Norris, supra.  (As I have noted in prior posts, the Katz Court’s test for determining whether a reasonable expectation of privacy exists is often referred to as the “assumption of risk” test.)


She also noted that


societal interests do not support recognizing [Norris’] reasonable expectation of privacy in data transmitted without authorization to Apartment 242's password protected wireless router. In U.S. v. Caymen, the defendant obtained a laptop from a store through the use of a fraudulent credit card. 404 F.3d 1196 (U.S. Court of Appeals for the 9th Circuit 2005).  Police later recovered the laptop, and obtained the store's permission to search [it]. U.S. v. Caymen, supra.  Police recovered child pornography from the laptop and the defendant was charged.


In denying the defendant's motion to suppress the evidence obtained from the computer, the court reasoned `one who takes property by theft or fraud cannot reasonably expect to retain possession and exclude others from it once he is caught. Whatever expectation of privacy he might assert is not a legitimate expectation that society is prepared to honor.’ U.S. v. Caymen, supra.


Similar to the defendant in Caymen, [Norris] transmitted information through an internet connection he did not have permission to use. . . .  Specifically, [he] hacked into Apartment 242's wireless Internet router and used the Internet without those occupants' consent. . . .The agents used Moocherhunter to detect the router activity with permission of the router's owners. . . . Any expectation of privacy the defendant may have had is trumped by the lawful owners' authorization given to the government. See  U.S. v. Caymen, supra.


If you would like to read about another case involving the use of MoocherHunter, check out this prior post.
Posted by Susan Brenner at 8:03 AM