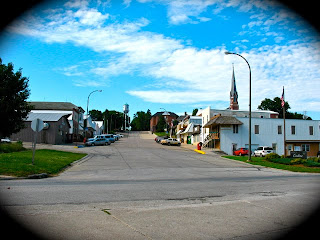 As I explained in an earlier post, extortion is a type of theft; but instead of simply taking someone else’s property away from them, the extortionist uses threats to force the owner of the property to hand it over to him/her.

As I noted in that earlier post, the Model Penal Code – a template of model criminal laws drafted by the American Law Institute – defines extortion as “purposely obtain[ing] property of another by threatening to inflict bodily injury on anyone”. Model Penal Code § 223.4(1).

Soboroff and Christi Miller, both residents of the small town of Calamus, were acquainted with each other. After Soboroff's video camera was damaged, Soboroff left three messages on Christi Miller's home answering machine. In the first of those messages, he stated:

`I am going to make an example out of every fucking one of you. So please, Christi, I don't want you to look twice at me. Okay? Don't look twice at me. Don't do a goddamn thing to me because I swear to God, Christi, if you ever approach me again, well, I won't say what'll happen. But if you ever approach me again, you won't like it. And I am serious, Christi. I am not going to take shit.’


In his next two messages, he threatened to place Miller's daughter's pictures, `along with the numbers they can be reached at, along with the addresses they can be found at, along with your home photograph,’ `on a number of [web]sites that you don't want em on.’ He concluded his messages by demanding `four hundred fucking dollars . . . right the hell now. Otherwise, I really don't give a rat's ass . . . you assholes.’

Soboroff v. State, supra. According to a new story, Soboroff claimed Miller had “damaged his video camera during an altercation nearly a year before the March 10 phone calls,” which she denied. (As we’ll see below, her daughter was 14 years old at the time, and there were circumstances which made her fear someone might abduct her daughter.)

Soboroff went to trial on the extortion charge. According to this new story, he chose a bench trial (i.e., being tried by a judge) over a jury trial and the judge ultimately found him guilty. I’m not exactly sure what sentence the judge imposed on him, but our concern is with his challenge to the extortion conviction, not to his sentence.

Soboroff was charged with violating Iowa Code § 711.4(1), which provides as follows:

A person commits the crime of extortion if . . . the person does . . . the following with the purpose of obtaining for oneself or another anything of value, tangible or intangible, including labor or services: . . . [t]hreatens to inflict physical injury on some person, or to commit any public offense.

The trial court judge applied the facts to this statute and “set out the elements of extortion as applied to this case as follows”:

`1. On or about the 10th day of March, 2008, the defendant threatened Christi Miller that he would place photographs of her home and/or her fourteen-year-old-daughter on websites, providing identity information about both the minor child and the Millers' address.

2. The defendant intended to communicate this threat towards Christi Miller.

3. The threat was made for the purpose of obtaining something of value for the defendant, specifically $400.

4. The defendant did not reasonably believe that he had a right to make threats in order to be paid for damage to his camera allegedly made by the victim.’

State v. Soboroff, supra. The judge then made the following findings, which supported Soboroff’s conviction on the extortion charge:

`Soboroff did willfully and unlawfully telephone Christi Miller's residence with the purpose of obtaining for himself cash in an amount of at least $400, and did threaten to inflict injury by public exposure on the Internet of Ms. Miller's home, phone number, and photographs of her fourteen-year-old daughter to induce her to make this payment to him. . . . Mr. Soboroff intended to communicate these threats toward Ms. Miller and . . . he did not reasonably believe that he had the right to make such threats in order to recover some debt from Ms. Miller based upon any good faith claim of his own.’

In ruling on this issue, the Court of Appeals noted that threats of physical injury “`need not be directly expressed, but may be contained in veiled statements nonetheless implying injury to the recipient when viewed in all the surrounding circumstances.’” State v. Soboroff, supra (quoting State v. McGinnis, 243 N.W.2d 583 (Iowa Supreme Court 1976)). The Court of Appeals also noted that it is sufficient if the threat was “`definite and understandable by a reasonable person of ordinary intelligence.’” State v. Soboroff, supra (quoting State v. McGinnis, supra).

The Court of Appeals found that the evidence was sufficient to support Soborff’s conviction for extortion:

We believe a reasonable person would have surmised from these statements that Soboroff was threatening to have physical injury inflicted on Miller and her family through the placement of personal information on the internet, if Miller did not give him the money he requested. . . . Miller, in fact, took the messages to mean just that. She testified she was `very upset.’ She expressed concern that Soboroff's threats placed her fourteen-year-old daughter in danger of being abducted from their home. She noted that her house was located `right on Highway 30’ and if Soboroff carried through with his threats, there would be `[e]asy access for anybody to stop, pick up my daughter.’ This evidence amounts to substantial evidence in support of a finding that Soboroff threatened to inflict physical injury as required by section 711.4(1).

Soboroff also claimed he was entitled to rely on the defense created by a later section of Iowa Code § 711.4. That part of the statute says

[i]t is a defense to a charge of extortion that the person making a threat other than a threat to commit a public offense, reasonably believed that the person had a right to make such threats in order to . . . receive compensation for property. . . .

The Court of Appeals rejected this argument because it found that threatening to inflict physical injury qualifies as a threat to commit a public offense. Its reasoning was that (I) Iowa Code § 701.2 defines a public offense as an offense that is prohibited by statute and punishable by fine or imprisonment; (ii) Iowa Code § 708.1 criminalizes assault, which it defines as any act intended to cause injury to another; and (iii) the Iowa Supreme Court defined “physical injury” in the extortion statute as “an injury to the body.” State v. Soboroff, supra. The court’s reasoning, then, was that Soboroff threatened to commit a public offense because he threatened to inflict physical injury on Miller.

What I really found interesting about this case, though, is that it illustrates how we need to revise traditional criminal statutes so they can encompass conduct mediated through cyberspace. A relatively recent development in federal cybercrime law illustrates what I mean.

In 2008, Congress revised 18 U.S. Code 1030(a)(7), which is the basic federal computer extortion statute. Until it was revised in September of 2008, § 1030(a)(7) made it a federal crime to “with intent to extort from any person any money or other thing of value transmit[] in interstate or foreign commerce any communication containing any threat to cause damage to a protected computer”. The original version of this crime, therefore, was a traditional extortion statute; it focused on using a threat to cause damage to a physical thing (a computer) as the gravamen of the act of extortion.

In September of 2008, Congress revised § 1030(a)(7) because it had become apparent that this approach to extortion was too narrow; there was a notable case, for example, in which the perpetrator threatened to release valuable proprietary information in to the public domain unless he was paid the outrageous sum he demanded. Since he didn’t threaten to damage a computer, as such, he couldn’t be prosecuted under the version of § 1030(a)(7) as it then existed. In 2008, Congress expanded the offense that is defined by 1030(a)(7) so it now encompasses not only threatening to damage a computer but also threatening to obtain or impair the confidentiality of information contained in a computer which you aren’t authorized to access.

If Iowa (and probably other states) revised its extortion statute so it encompassed the kind of thing Soboroff was alleged to have threatened, the statute would clearly have applied to his conduct . . . and the Court of Appeals wouldn’t have had to spend time addressing the issue outlined above. It could also mean that the statute could be used to address novel types of virtual extortion; as I’ve noted, cyberspace lets those who are so inclined inflict varying types of “harm” on others in new and undesirable ways.