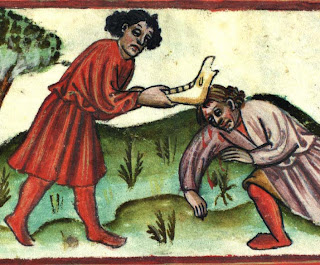 I’ve been writing lately about various issues involving different kinds of online mayhem, so I decided to look at what is presumably the worst possible online crime – murder. I think we would all agree that in the real-world deliberately taking another person’s life is the worst crime possible . . . absent certain mitigating circumstances.

It is not murder for a solder to take another person’s life. Taking life in the course of combat is the soldier'sduty; it’s not considered murder because he or she is acting out of a type of necessity. The life is taken as part of a struggle between two countries and their respective sovereign needs to prevail in the conflict is seen as necessitating – and justifying – the killing inflicted by the members of their respective militaries.

What about online? What about virtual murder? By virtual murder I mean “killing” that occurs online in a virtual environment . . . not the (so-far-theoretical) use of computer technology to take someone’s life in the real, physical world. That would simply be murder, no discussion, no controversy, no ambiguity – homicide by another means.

I’ve not made a serious empirical study of this, but I gather that so far virtual murders can occur in at least two ways online. One is player killing in online games; the other is avatar murder in online environments like Second Life.

I’m not a gamer, and while I know something about World of Warcraft, I make no pretense to understanding its rules or the etiquette of online combat. From what I’ve read and heard, though, I gather that nonconsensual player killing (killing outside, say, of duels) can and does occur, but seems to be considered bad form. That is, it happens, but players who engage in killing repeatedly may find themselves being shunned.

If that’s true, I find it interesting, for several reasons. One reason is that it seems to import the norms we follow in the external world into this virtual environment. The norms are not enforced as stringently as in the “outside” world – there seems to be no process for bringing virtual charges of homicide, having a virtual trial and then virtually executing those who are convicted of virtual murder. And I’m most definitely not arguing for that. Seems to me the whole point of participating in online environments is to leave behind the structures and strictures of the real-world.

I merely find it interesting that a version of the external norm that sees homicide as unacceptable migrates into online environments where homicide is usually not forever. That is, a character who is murdered can be resuscitated, except in extraordinary circumstances, so what really happens is not the extinction of a virtual life but the interruption of that virtual life. I can understand why even the interruption would be traumatic. A few years ago, I was playing an online game, did something stupid, realized I was going to die in the game and found myself frantically pounding on the keyboard in an effort to stop it (and I might even have been repeating something like “No!” or “Wait!” while I was pounding) . . . but I failed and I died and it was a really weird experience. I came back, of course, did things right the next time and didn’t die.

Online games that involve any level of potentially lethal combat are one context, one in which, I would argue, there is at least some assumption of the risk of virtual homicide. That is, even though there are apparently norms in play in some games, anyway, that discourage player killing, it happens. And I gather it can be a perfectly routine part of certain game structures, such as combat scenarios.

As far as I’m concerned, the more intriguing context for analyzing virtual murder is online worlds like Second Life – places that de-emphasize, or compartmentalize, mayhem and functionally tend to simulate real-life. I haven’t been able to track down any instance of “real” murder in Second Life – just an account of a pseudo-murder that seems to have a social event. The Second Life Insider has a really good post on “avatar murder” which, while it doesn’t describe any actual avatar murders, raises some good questions about avatar murder as entertainment:

If two consenting adults role play the killing of one another, few people care. There was no actual crime, there are no actual victims, few people believe the role-play will escalate into a real killing nor will it encourage or entice others to kill. Most importantly, witnessing one avatar murdering another does not seem to be widely offensive.

Here, we have consensual murder, something that rarely happens in the real-world and is still a crime when it does happen. Just ask the German cannibal who claimed he had “full consent” from the man he killed; consent is not a defense to murder in the real-world because, as I’ve said before, a crime is an offense against the state. The state does not care if the victim consented to being killed because (i) the killer’s conduct violated the state’s rules of conduct and (ii) it shows he is dangerous, i.e, has the potential to do this again.

Online, though, why should anyone care if people play at murder? It may seem a weird way to amuse yourselves, but remember that fantasized homicide is a dominant theme in our entertainments, in movies, books, television, etc. It always has been. We find the ultimate crime fascinating, so it will not be surprising if people start to play at it in places like Second Life, places where killing is impermanent and therefore not entirely socially unacceptable. If murder enclaves crop up in Second Life, they might occupy a status analogous to red-light districts, you know, places you go to for the kind of activity you don’t want to publicly acknowledge engaging in. (“Hi, I’m a lawyer in real-life, serial killer online.” . . .)

Would the law care if virtual murder became an avocation in online environments like Second Life? I can’t see why it would. As the post quoted above notes, no one is really killed so no real “harm” occurs; and if the killing is part of a game, the victim agreed to be killed so, unlike the combat games I talked about above, here the person has consented to that specific outcome.

If virtual murder became popular, some might argue that this kind of activity should be criminalized because it could encourage those who participate in the virtual killings or those who observe the killings to extrapolate what occurred online to the real-world. That is, critics of our hypothesized virtual murder clubs would argue that, they should be criminalized because they could encourage people to commit “real” murder.

That argument should founder on the First Amendment. The activity we are attributing to our hypothesized virtual murder clubs would constitute speech protected by the First Amendment in the same way, and for the same reasons, violent video games are protected by that amendment. Entertainment Software Association v. Blagojevich, 469 F.3d 641 (Seventh Circuti Court of Appeals 2006). We assume people can separate the unreal from the real, that they are not so malleable as to emulate whatever they observe online (or on television or on a movie screen, for that matter).

This is an odd post, I’m afraid. It’s been my way of working through some issues I suspect we will encounter one of these days, as the complexity and peculiarity of our cyberlives continue to evolve.
Posted by Susan Brenner at 12:08 PM

The idea of in-game "murder" is quite interesting when phrased in that way, but as you said, I think it is ultimately not something to be seriously concerned with. Something that interests me more is the heists/cons that take place in online games, because in these games the in-game money is often translatable to real-world value. A particularly stunning example is a 9-month long con that took place in the game EVE Online, which resulted in the theft of over $16,000 worth of in-game money.

You can read the article here: http://eve.klaki.net/heist/

If a husband poisons his wife and she dies but is resuscitated, would he still be charged with murder?