The Laptop, the Motion for Return of Property and Forfeiture 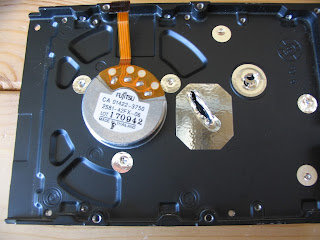 As I have explained in other posts, the law provides two different remedies for a violation of someone’s 4th Amendment rights.  In most of my posts, the remedy the defendant is seeking is the suppression of evidence seized and/or found when officers search items belonging to him/her that were seized by law enforcement.

There is, though, another remedy.  As I have noted in prior posts, someone who believes his/her property was seized in violation of the 4th Amendment can file a motion for return of property.  In the federal justice system, the person files the motion under Rule 41(g) of the Federal Rules of Criminal Procedure, which you can find here.

This post examines a recent opinion from the U.S. Court of Appeals for the 10thCircuit in which a federal inmate, who is proceeding pro se, appealed the U.S. District Court judge’s denial of his motion for return of certain property.  U.S. v. Penry, 515 Fed. Appx. 784 (2013). More precisely, the opinion notes, initially, that

One of the briefs in the case explains that Penry shared a motel room with another man and that both used Penry’s Dell laptop and Fujitsu hard drive to “download and view child pornography from the Internet.”  Brief of Appellee, U.S. v. Penry, 2013 WL 1088146. Penry also told investigators, after waiving his Miranda rights, that “he and his roommate would attempt to camouflage the child pornography on the computer by altering the file names and extensions.” Brief of Appellee, supra.

The opinion summarizes the facts  that led to Penry’s filing his motion for return of property:

On February 26, 2008, agents with the Wyoming Internet Crimes Against Children task force interviewed Penry, who admitted he used the computer to download and view child pornography from the internet and attempted to camouflage such pornography by altering file names and extensions.

On March 7, 2008, authorities obtained and executed a search warrant on the computer and its hard drive where they discovered more than 600 images and videos of young children engaging in sexually explicit activity. An indictment followed, charging Penry with one count of possession of child pornography in violation of 18 U.S. Code § 2252A(a)(5)(B and (b)(2). . . .

One month later, Penry entered into a plea agreement and pled guilty to the indictment. At his plea hearing, Penry again admitted he knowingly possessed property containing digital images of child pornography. On July 11, 2008, the district court sentenced him to 150 months imprisonment and twenty years supervised release.

The opinion also notes that the indictment against Penry “did not . . . charge Penry with a count for criminal forfeiture under 18 U.S. Code § 2253 relating to the property seized.” U.S. v. Penry, supra.

It then explains that in August of 2012, Penry filed the

instant Rule 41(g) motion, seeking the return of his seized property, claiming the government failed to obtain the required forfeiture order on said property, and arguing the fourteen-day delay in obtaining and executing a search warrant following his arrest violated his constitutional right against unreasonable search and seizure. The government objected, arguing Penry forfeited his right to such property when he used it in the commission of the offense for which he was convicted.

As noted above, the U.S. District Court judge issued an order denying Penry’s motion “with respect to the laptop computer and its hard drive”.  U.S. v. Penry, supra.

On appeal, Penry argued that the district court judge abused his discretion by

failing to follow the required criminal and administrative forfeiture procedures, as required by 18 U.S. Code § 2254, 21 U.S. Code § 853, and Federal Rule of Criminal Procedure 32.2, and that the government failed to obtain a forfeiture order pursuant to those provisions.

Penry also renews his argument the government violated his constitutional right against unreasonable search and seizure based on the fourteen-day delay between his arrest and the issuance and execution of the search warrant. He also suggests Rule 41(g) is the appropriate avenue for recovery of such property as well as to suppress evidence obtained through an illegal search and seizure.

The court began its opinion with the

general premise that `[t]he government is clearly permitted to seize evidence for use in investigations and trial,’ but, as a general rule, `seized property, other than contraband, should be returned to its rightful owner once the criminal proceedings have terminated.’ U.S. v. Rodriguez–Aguirre, 264 F.3d 1195 (U.S. Court of Appeals for the 10th Circuit 2001). . . .

Section 2253 explains what is considered contraband or property subject to forfeiture for offenses, like Penry's, which involve the sexual exploitation of children. It states defendants involved in such offenses `shall forfeit to the United States such person's interest in’ any visual depictions, proceeds obtained from such an offense, and `any property, real or personal, used or intended to be used to commit or promote the commission of such offense or any property traceable to such property.’ See 18 U.S. Code § 2253(a)(1)-(3).

It further references the general statute regarding criminal forfeitures, 28 U.S. Code § 853, explaining the provisions of that statute also apply, except for `subsections (a) and (d).’ Section 853 is the statute on which Penry relies in his appeal. However, the unexcepted subsections of § 853 do not aid in our disposition of this appeal given they involve primarily the treatment of such property with respect to third parties, protective orders, the court's authority to issue warrants for seizure, and the government's disposition of seized property. See 21 U.S. Code § 853(a)-(q). Only the excepted provision in subsection (a), which does not apply, states an order of forfeiture shall issue.

The Court of Appeals then pointed out that

[w]hile § 2253 directs the forfeiture of contraband property involved in the offense Penry committed, he correctly contends no forfeiture order has been issued giving title to the government. Federal Rule of Criminal Procedure 32.2, regarding criminal forfeitures, and on which Penry also relies, requires the court to issue a forfeiture order, directly or by reference, in a criminal judgment. . . .

However, such an order may issue only if `the indictment or information contains notice to the defendant that the government will seek forfeiture of property as part of any sentence in accordance with the applicable statute.’ See Federal Rule of Criminal Procedure 32.2(a). In this case, the indictment did not contain a forfeiture count pursuant to § 2253 and, accordingly, the district court did not enter a criminal forfeiture order in the judgment.
Penry also correctly points out no administrative forfeiture of his property occurred under 18 U.S. Code § 2254. While the government may obtain quiet title to property involved in a criminal proceeding through an administrative forfeiture proceeding, . . . no such administrative proceeding occurred in this case.

Finally, it noted that “a party or the government may gain quiet title to confiscated property in a civil equitable proceeding brought pursuant to Federal Rule of Criminal Procedure 41(g) -- the rule on which Penry now bases his motion.” U.S. v. Penry, supra. As to what is required to prevail under Rule 41(g), the court explained that it reviews

questions of law relating to Rule 41(g) motions de novo and review the district court's weighing of equitable considerations and its decision to deny such a motion for an abuse of discretion. . . . Generally, when a claimant seeks recovery of property through a Rule 41(g) proceeding, we have said the claimant `must prove only a right to lawful possession of the property and an equitable right to its return, and no presumptions exist in favor of the government.’ U.S. v. Clymore, 245 F.3d 1195 (U.S. Court of Appeals for the 10th Circuit 2001).

However, when the property is used to commit the offense on which the defendant received his conviction, only an innocent owner or one aggrieved by an illegal seizure may qualify for lawful possession of the property. See U.S. v. Clymore, supra (holding contraband and other property used to commit drug offense was not subject to return to convicted defendant).

When defendants attempt through a Rule 41 proceeding to equitably recover property seized during arrest, we have said a court may give quiet title to the government, explaining defendants who use the property to commit an offense lack a `conclusively presumptive property right in the fruit of their criminal conduct.’ U.S. v. Clymore, supra

It then applied this standard, beginning by noting that in this case,

As a result, Penry is not innocent with regard to the use of such property and, pursuant to 18 U.S. Code § 2253, such property is clearly subject to forfeiture.

[w]ith respect to whether such property was illegally seized, the district court declined to make a determination on the merits, holding Penry could not collaterally challenge the circumstances surrounding the search and seizure through a post-conviction Rule 41(g) motion. We agree and have found no legal precedent stating otherwise. . . . In addition, no prior ruling or anything in the record suggests the search and seizure at issue were illegal.

Because nothing indicates illegal seizure of Penry's property and he soundly lacks the legal innocence required for its return, he fails to show he is entitled to the return of his laptop computer and hard drive. As such, the district court did not abuse its discretion in denying that portion of Penry's motion relating to this property, thereby giving quiet title to the government.

Finally, the court pointed out that

[e]ven if we addressed the merits of the legality of the search and seizure of such property for Penry's benefit, he could not prevail. He was arrested on February 18, 2008, on circumstances unrelated to his exploitation of a minor conviction. Only after his roommate's production of the property at issue on February 22, 2008, did authorities have notice of Penry's instant offense.

Information from the roommate, together with Penry's own admission, on February 26, 2008, to using such property to download and view child pornography, was sufficient to show probable cause for a search warrant, . . . and the fact it was not obtained and executed until approximately fourteen days after his admission does not establish, under the circumstances presented, the degree of delay necessary for the purpose of making the seizure of his property unconstitutional. . . .