Staples, the Laptop and the 4th Amendment 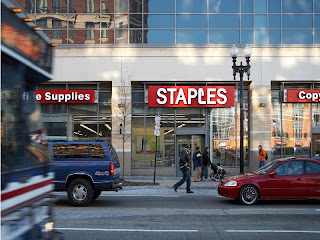 Eugene O. Dale pled “guilty to sexual exploitation of a minor, where the number of materials possessed was greater than fifty and less than one hundred” in violation of Tennessee Code § 39-17-1003 “subject to a reserved certified question of law that challenged the trial court's denial of [his] motion to suppress evidence.”  State v. Dale, 2013 WL 4459012 (Tennessee Court of Criminal Appeals 2013). The trial judge “imposed the agreed-upon sentence of eight years with a release eligibility of thirty-five percent.”  State v. Dale, supra.

Tennessee Rules of Appellate Procedure Rule 3(b) lets a criminal defendant pled guilty while reserving the right to challenge the trial judge’s ruling on a particular issue of law, such as this judge’s denying Dale’s motion to suppress.  This procedure exists in the federal system and in other states; it is a way to let a defendant reserve the right to appeal what he or she thinks is an erroneous ruling without having to go through a trial (the assumption being that he or she might be convicted, if a trial was held with the evidence being admitted).

In his appeal, Dale argued that “the warrant authorizing the search of his computer was not supported by probable cause because the affidavit for the search warrant relied upon unconstitutionally obtained information.”  State v. Dale, supra.  To understand why he made that argument, it is necessary to understand how the case arose:

While working on [Dale’s] computer, a Staples computer technician, Joshua Westover, discovered what he believed to be child pornography on [his] computer. A Staples employee contacted the police, and Chattanooga Police Officer Charles Darling viewed the images at Staples and confiscated the computer.

In his motion to suppress, Dale argued that

the Staples computer technician who discovered the illegal images was acting as an agent of the government, which, if true, would render the technician's examination of appellant's computer a search under search and seizure law.

[Dale] argued in the alternative that should the trial court rule that the technician's examination was permissible as a private party search, the police officer's search of the computer prior to seizing it exceeded the scope of the private party search.

[Dale] contended that the affidavit in support of the search warrant relied on information obtained from the police officer's illegal search, and without that information, there could not be a showing of probable cause to support the issuance of a search warrant.

(As I have explained in prior posts, the 4th Amendment to the U.S. Constitution, which bans “unreasonable” searches and seizures, only applies to searches and seizures conducted by law enforcement officers, e.g., agents of the state.  So, when a private person searches for and seizes evidence and takes it to law enforcement, the 4th Amendment (i) is not implicated if that person acted on his or her own, e.g., because they are angry as the person to whom the evidence belongs but (ii) is implicated if that person acted as an “agent” law enforcement, e.g., because police asked him or her to search for and seize the evidence.)

As to the issues in this case, the opinion explains that at the hearing on Dale’s motion to suppress,

Joshua Westover testified that in November 2007, he was working as a computer technician at Staples. He was nineteen years old at the time, and all of his computer training had been done through Staples. He agreed that his ability to identify child pornography would be the capability of any ordinary person, as he had not received any specific training in that regard. Westover explained that Staples' policy regarding suspect images was that the computer technician would notify a manager. The manager would call `corporate,’ who would work with the manager to determine the next step.

Westover testified that . . . this case was the first and only time he saw suspect images on a client's computer that led to police involvement. He said that the department's lead technician was the person who interacted with [Dale]. Westover did not recall [Dale] giving the lead technician any limitations about what they could review on the computer. The lead technician prepared a work order that Westover interpreted as meaning that he needed to locate the virus on [Dale’s] computer and find out why it had a virus in November 2007 when, in August 2007, it had undergone a `system restore,’ which involved returning the computer to its factory defaults, and had an anti-virus program installed.

Westover ran a program on the computer called SUPERAntiSpyware Pro that locates viruses and spyware and gives a detailed description of the location of infected files. The program showed Westover that the virus was located in `My Documents’ in a folder labeled `PVT.’ Westover opened the `PVT’ folder and saw `thumbnails,’ which he defined as `preview[s] of what the file looks like.’ He said that `all the pictures [in the folder] were listed’ with the thumbnails.

Westover explained that the files in question were `allocated,’ meaning that the user had to save them and place them in the folder. He testified that after he reviewed the folder, he minimized the window and called a manager. He showed the folder to his manager, who called `corporate’ and law enforcement.

The opinion goes on to explain that when Darling arrived at the Staples, Westover told

him that he had seen what he assumed to be child pornography on [Dale’s] computer. When asked whether Darling asked Westover to show him all of the images, he replied, `[The images] were already exposed, but yes.’ Westover testified that Darling informed him that he was looking for `one specific type of image’ that portrayed a person who was `clearly underage and [also portrayed] sexual penetration’ in order to identify an image as child pornography.

Darling found images that met his criteria, and he asked Westover additional questions about the file. Darling wanted to know whether the images had been taken by a camera and downloaded onto the computer or downloaded from websites, but Westover was not able to make that determination. In addition, Darling wanted to know when the images were downloaded, and Westover determined that the images were downloaded after [Dale] had the computer's system restored in August 2007. Westover testified that some time later, he gave a written statement to Detective Usry.

On cross-examination, Westover testified that the `PVT’ folder was created two days before [Dale] brought his computer to Staples. He explained that the files in the folder would have been intentionally placed there. Westover said when he opened the `PVT’ folder, the thumbnails showed females between the ages of five and thirteen, and all of the images were `sexual.’ He explained that the images showed `see-through bathing suits, oral sex, penetration sex, [and] just nude images.’ Westover testified that he did not `stare at the pictures long enough to . . . look at every image’ but looked long enough `[t]o recognize it was child porn.’

At Dale’s trial, Detective Usry testified that on January 2, 2008, he received a message that

the Chattanooga Police Department had in its possession a computer with child pornography on it, and he was asked to investigate. He took possession of the computer from the police department. He also obtained written statements from Westover and his manager. Usry contacted the district attorney's office for assistance in drafting a search warrant. He applied for and obtained a search warrant for [Dale’s] computer. Usry took [Dale’s] computer to the TBI crime lab and had the search warrant executed. He testified that he never turned on the computer himself.

In its opinion, the Court of Appeals addressed two issues:  whether Dale had a 4th Amendment expectation of privacy in the contents of his computer and whether Darling’s search of the computer “was beyond the scope of the private party” search conducted by Westover. State v. Dale, supra.  As I have explained in prior posts, and as Wikipedia notes, the Supreme Court has held that, for law enforcement or law-enforcement-encouraged searches to violate the 4th Amendment, the owner of the property searched must have had a “reasonable” expectation of privacy in it.  To have such an expectation, as I have noted in prior posts and as Wikipedia notes, (i) the person must subjectively believe it is “private” and (ii) society must accept that belief as objectively reasonable.

The court began its analysis of the issue by noting that in this case, Dale

placed the offensive images in a folder labeled `PVT,’ which he argues means `Private.’ He further argues that this evinces his subjective expectation of privacy. However, he handed his computer and its password over to the employees of Staples with directions to find out why the computer had a virus. There is no evidence in the record that he made any attempt to restrict access to any information on his computer. Westover discovered the offensive images in the course of executing [Dale’s] work order. Darling confiscated the computer after Westover showed him the images.

The court found that the trial judge was correct in denying Dale’s motion to suppress:

On appeal, Dale argued that “Darling's search of the computer was beyond the scope of the private party search because, he claims, Darling and Westover enlarged images, looked at information Westover had not previously seen, and looked at more images than Westover saw initially.”  State v. Dale, supra.  At the hearing on Dale’s motion,

Westover described the images he saw on [Dale’s] computer as depicting females, ages five to thirteen years old, some of whom were engaged in oral or penetrative sex.  Westover testified that when he opened the folder, all of the images in the folder were `exposed’ as thumbnails. Therefore, it did not exceed the scope of Westover's initial search for Darling to look at enough images to ensure that the images were child pornography.

While the testimony at the hearing did not establish whether Mr. Westover and Officer Darling actually enlarged the images or opened the images rather than merely viewing the thumbnails, any such action would not have exceeded the scope of the private party search. . . .

Furthermore, at the point in time when Darling saw what he believed to be child pornography on [Dale’s] computer, the incriminating nature of the computer was readily apparent, and the computer was subject to seizure under the plain view doctrine. . . .

State v. Dale, supra.  As I have noted in prior posts, and as Wikipedia explains, the plain view doctrine is a principle of 4th Amendment law that expands the scope of a lawful 4th Amendment search.  If officers are conducting a search that is lawful under the 4th Amendment and see – in “plain view” – evidence they were not expecting, then they can seize the evidence without violating the 4th Amendment.

The Court of Appeals therefore affirmed the trial judge’s denial of Dale’s motion to suppress and, in so doing, upheld his conviction and sentence.  State v. Dale, supra.
Posted by Susan Brenner at 7:38 AM