Wrongful Termination, Extortion and Using a Computer to Commit a Crime 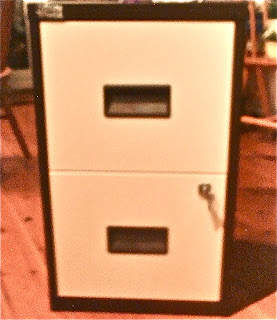 After he was convicted of extortion and using a computer to commit a crime in violation of Michigan law and sentenced to “60 to 240 months for each offense”, Patrick Joseph Morrissey appealed.  People v. Morrissey, N.W.2d, 2012 WL 4039682 (Michigan Court of Appeals 2012).

The Court of Appeals began its opinion by explaining how Morrissey came to be charged with and convicted of these crimes:

[His] convictions arose from his efforts to extort money from his former employer, Steelcase, by sending numerous threatening e-mails under the pseudonym `Crazy Chrissy’ to members of Steelcase's board of directors. Chrissy threatened to release materials related to [his] termination from Steelcase, which `she’ claimed would be harmful to Steelcase.

To stop the release of information, Chrissy demanded money and insisted that Steelcase rectify [Morrissey’s] allegedly wrongful termination by putting him through the severance process.

The opinion quotes some of Crazy Chrissy’s emails, like this one: “`[m]ake no mistake, this video will go out all over the internet on Thursday should Steelcase not come through.’” People v. Morrissey, supra.  Here’s another:

`Don't be dumb, Steelcase. We had a policeman contact us. This was not very wise. If you do that again, we will raise our price. Do not have any authorities bother Pat or us in any way.’

`Even if you would find out who we are, a friend of ours would release the video. You would lose much worse. We would spread this story much more than what we are saying already. It would go straight to the major newspapers. Do not be dumb. We have copies with other people we know. Just do what we ask and this will be over soon.’

Morrissey’s first argument on appeal was that Steelcase, as a corporation, was not a “person” who could be extorted under the Michigan statute, which provides as follows:

Any person who shall, either orally or by a written or printed communication, maliciously threaten to accuse another of any crime or offense, or shall orally or by any written or printed communication maliciously threaten any injury to the person or property or mother, father, husband, wife or child of another with intent thereby to extort money or any pecuniary advantage whatever, or with intent to compel the person so threatened to do or refrain from doing any act against his will, shall be guilty of a felony, punishable by imprisonment in the state prison not more than 20 years or by a fine of not more than 10,000 dollars.

provide a definition of `person’ or `of another’. . . . However, under the general provisions of the penal code, `[t]he words ‘person,’ ‘accused,’ and similar words include, unless a contrary intention appears, public and private corporations, copartnerships, and unincorporated or voluntary associations.” Michigan Complied Laws § 750.10.  Similarly, the Legislature has enacted general rules of construction to govern `construction of the statutes of this state.’ Michigan Complied Laws § 8.3.

Under these general rules of construction, `[t]he word “person’” may extend and be applied to bodies politic and corporate, as well as to individuals.’ Michigan Complied Laws § 8.3.  `When the Legislature has provided a definition, it is binding and the courts cannot ‘look afield’ for their meaning elsewhere.’ People v. Washpun, 175 Mich.App 420, 438 NW2d 305 (Michigan Court of Apepals1989). In keeping with the Legislature's definition, we have repeatedly held that “person” extends beyond human persons to include corporations. . . .

We are not persuaded by [Morrissey’s] argument that the Legislature's definition of `person’ should be used only in regards to those accused of a crime. Instead, `identical language in various provisions of the same act should be construed identically.’ People v. Wiggins, 289 Mich.App 126, 795 N.W. 2d 232 (Michigan Court of Appeals 2010).

Given the Legislature's express definitions of `person’ and `similar words,’ we conclude that § 750.213 includes corporations as a `person’ who may be the victim of extortion.

Morrissey also argued that the trial judge “should have instructed the jury that the action defendant sought to extort from Steelcase had to be `serious.’” People v. Morrissey, supra.  In analyzing this argument, the court noted that he

However, because [Morrissey] failed to request an instruction relating to this theory that his demand was not `serious,' the trial court was not required to present such an instruction to the jury and failure to give such an instruction is not grounds for reversal. People v. Mills, 450 Mich. 61, 537 N.W. 2d 909 (Michigan Supreme Court 1995); Michigan Compiled Laws § 768.29.

Moreover, the trial court instructed the jury that [Morrissey] must intend to make Steelcase `do something against its will` and `against its will’ was defined as to be forced `to make a choice and it has to choose the lesser of two evils.’ The phrase `lesser of two evils’ imparts the severity of the demand required to commit extortion, and as such, the instructions as given were a correct statement of the law. . . .

To the extent [his] argument suggests the prosecutor misstated the law, his claim is also without merit. Any potential error in the prosecution's legal argument was cured by the trial court's explanation of the law and instructions that the jury should follow the court's explanation of the law. People v. Grayer, 252 Mich. App 349, 651 N.W. 2d 818 (Michigan Court of Appeals 2002).

Morrissey also argued that the trial judge erred in not letting the jury see a Power Point presentation he created and that “depicted his understanding of why and how he was fired from Steelcase" because the presentation was hearsay.  People v. Morrissey, supra.  Hearsay is a statement made by someone who does not testify at the trial but is repeated by a witness who does testify.  Morrissey claimed the presentation was not hearsay, which is excluded unless hearsay falls into one of a number of exceptions to the default rule excluding it, and the Court of Appeals agreed.  People v. Morrissey, supra. If you’d like to read more about what hearsay is and why it is presumptively excluded from evidence, check out this blog post.

The court found that the

Instead, he sought to establish that the information was not threatening and could not pose a risk of injury’ to Steelcase within the meaning of § 750.213. Because Morrissey was not seeking to establish the truth of the contents contained in the Power Point presentation, it did not constitute hearsay.

Notwithstanding that, the Court of Appeals found that the trial judge did not err in excluding the presentation, for either or both of two reasons. People v. Morrissey, supra.

The first was that it was

irrelevant and its probative value was substantially outweighed by the risk of confusion and the needless presentation of cumulative evidence. ‘Relevant evidence’ means evidence having any tendency to make the existence of any fact that is of consequence to the determination of the action more probable or less probable than it would be without the evidence. Michigan Rule of Evidence 401.

[Morrissey] was charged with extortion on the theory that he threatened injury to Steelcase's property with the intent to extort money or compel action from Steelcase. . . .  The crime of extortion is complete at the time the threat is made. . . . An overt act is not required, nor is the victim required to feel intimidated. . . .

Likewise, there is no requirement in the plain language of § 750.213 that [Morrissey] possess the means to accomplish his threat. In this case, the Power Point presentation was not the threat; the e-mails were the threat. The e-mails contained an express threat to make information regarding [Morrissey's]  termination public, specifically information that Chrissy claimed would make Steelcase look like `morons,’ `anger [Steelcase's] current employees,’ `start up a scandal at Steelcase,’ and impede Steelcase's efforts at recruiting new employees.

As noted above, the Court of Appeals also found that even if the Power Point was

relevant, it was properly excluded under Michigan Rule of Evidence 403, which provides that `[a]lthough relevant, evidence may be excluded if its probative value is substantially outweighed by the danger of unfair prejudice, confusion of the issues, or misleading the members, or by considerations of undue delay, waste of time, or needless presentation of cumulative evidence.’

`Rule 403 determinations are best left to a contemporaneous assessment of the presentation, credibility, and effect of testimony by the trial judge.” People v. Bahoda, 448 Mich. 261, 531 NW2d 659 (Michigan Supreme Court 1995). In this case, the trial court determined that the Power Point presentation could confuse the issues, pose difficulty in presenting the material to the jury, and was already incorporated in [Morrissey’s] own testimony.

Because the Power Point presentation had no bearing on whether the e-mails expressed a threat, the probative value of the presentation was minimal. Additionally, the information in the Power Point consisted of [Morrissey’s] version of events surrounding his termination, facts to which he testified during trial. As such, introduction of the Power Point was the needless presentation of cumulative evidence. It also posed a risk of diverting the jury's attention from the criminal matters at issue by confusing them with irrelevant contentions from [Morrissey’s] civil litigation.

The court therefore affirmed Morrissey’s conviction and sentences.  People v. Morrissey, supra.  If you would like to read a little more about the case and see Morrissey’s photo, check out this site.
Posted by Susan Brenner at 8:11 AM

With sentences like this it is no wonder that the crimianl justice system has so little credibility. I didn't see anything in this story or in any of the other news articles I read on this case that says he had a gun or was going to kill people or blow stuff up, etc.

So him sending some angry emails gets him twenty years?!? He would have been better off just killing his bosses instead. Its not like he would not have gotten much more time.

by the way, your blog is all messed up and i can't read any of your posts. under this post you have a pic of some CDs and a mention of marijuana, but no story. nor can i see any of your past stories, either.