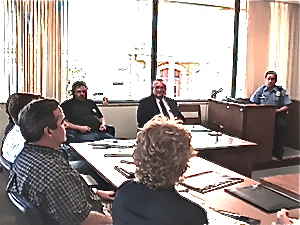 After he was indicted on and convicted of “twelve counts of pandering sexually oriented material involving a minor in violation of [Ohio Revised Code] § 2907.322 and thirty counts of illegal use of a minor in nudity oriented material or performance in violation of [Ohio Revised Code] § 2907.323," Bryan Bates appealed.  State v. Bates, 2012 WL 4358265 (Ohio Court of Appeals 2012).

On appeal, Bates argued that the

trial court abused its discretion in not conducting an in-camera inspection of the transcripts of the evidence presented to the grand jury in his criminal case to determine whether the testimony before the grand jury was inconsistent with testimony presented at trial.

State v. Bates, supra.  As Wikipedia notes, when an appellate court reviews a trial judge’s ruling for abuse of discretion, the ruling “will not be reversed unless the decision is unreasonable.”

And as Wikipedia explains, a grand jury “is a type of jury that determines whether a criminal indictment will be issued.”  As Wikipedia also notes, it is known as a “grand” jury because historically grand juries have had 16-23 jurors, which makes them larger (“grander”) than trial juries.

As Wikipedia also notes, the 5th Amendment requires that the federal system use grand juries to bring charges, via an indictment, for serious crimes.  And as this article notes, the U.S. Supreme Court has not interpreted that part of the 5th Amendment as binding on the states, which means that the states do not have to use the grand jury.  Notwithstanding that, most, if not all, U.S. states still use the grand jury, in various ways.

A distinctive characteristic of grand jury investigations is that everything that occurs in the grand jury must be kept secret by those that are privy to its proceedings, i.e., the grand jurors, the prosecutor, an interpreter if a witness needs one and a court reporter who transcribes the proceedings.

Rule 6(e) of the Ohio Rules of Criminal Procedure states that these individuals are not to disclose “matters occurring before the grand jury”.  This is consistent with federal practice.  As the U.S. Supreme Court has explained, secrecy is meant to prevent (i) those being investigated from bribing or threatening grand jurors to get them to vote against indicting and/or fleeing the jurisdiction to avoid prosecution, (ii) to protect the innocent whose names come up in a grand jury investigation and (iii) to encourage witnesses to speak freely before a grand jury.

Like its federal counterpart, Rule 6(e) of the Ohio Rules of Criminal Procedure says matters occurring before a grand jury “may be disclosed preliminarily to or in connection with a judicial proceeding, or when the defendant has shown grounds may exist for a motion to dismiss the indictment because of matters occurring before the grand jury.”  As to the basis for ordering such disclosure, in

U.S. v. Proctor & Gamble Co., 356 U.S. 667 (1958),  the U.S. Supreme Court found a trial court has discretion to release grand jury transcripts when a defendant demonstrates a particularized need such that the secrecy of the proceedings should be discretely and limitedly lifted.

In State v. Greer, 66 Ohio St.2d 139, 420 N.E.2d 982 (1981), the Ohio Supreme Court found the defendant has demonstrated a particularized need when, after a consideration of all the surrounding circumstances, the court finds it is probable that failure to disclose the grand jury testimony will deprive the defendant of a fair adjudication of the allegation placed at issue in the testimony presented at trial.

Courts have applied the same `particularized need' test for post-verdict requests for grand jury transcripts as for requests made prior to or during trial.

require the trial court, upon proper motion, to consider the basis of the particularized need advanced by the defendant. This may be accomplished by an in camera inspection of the grand jury minutes by the trial court assisted by counsel.

So the Ohio Supreme Court, like various federal courts, found that when a defendant seeks access to transcripts of what occurred before a grand jury, the proper procedure is for the judge to conduct an in camera – a secret – inspection of the grand jury transcript to see if the defendant has, in fact, shown particularized need for access to some portions of them.  But to trigger this requirement, the defendant has to come forward with at least a colorable showing of particularized need, which is not easy to do, given that grand jury proceedings are secret.

As to the standard to be used in reviewing a trial judge’s refusal to order in camera review and, perhaps, disclosure, the Court of Appeals explained that it

As to the evidence at issue in this case, the court notes that Bates

directs us to the testimony of Agent Cameron Bryant, Detective John Davis, and Detective Ron Pollock, arguing portions of the testimony the officers variously gave in the affidavit submitted in support of the search warrant, at the suppression hearing, and at trial are internally inconsistent, giving rise to a particularized need to review their testimony before the grand jury.

The Court of Appeals explained that Bates was arguing that

Bryant testified at trial regarding how images are sent and received through the Internet and how an image is saved on a computer's hard drive. [Bates] asserts the testimony is not only inconsistent but also false and misleading. . .

[Bates] also argues Bryant's testimony was inconsistent regarding the origin of the images. Bryant testified he believed the images originated from the Internet. Thereafter, he testified the images came either from a website or from someone who sent the images with the consent of the user, by which he meant [Bryant].

Bryant testified he could not determine whether the images were downloaded from a website or received from another user.

After considering Bates’ arguments and the evidence in question, the appellate court found that “Bryant's testimony is not internally inconsistent.”  State v. Bates, supra.

(It also noted that Bates at least “arguably” could be precluded from raising this issue in this appeal because he had not raised it in an earlier in an earlier appeal to the Court of Appeals.  State v. Bates, supra.  In that appeal, he argued that the trial judge erred in denying his motion to suppress “testimony of the State’s expert in computer forensics”.  State v. Bates, supra.

there was a question as to who testified at the grand jury hearing and what was presented. The computer forensic report was not completed until after the indictment was issued.

[Bates] argues the indictment states facts which could only have been retrieved using computer forensic procedures. [He] argues the question of how the facts were presented before the grand jury must be answered.

We do not agree. There is no showing that the information contained in the indictment must have been gleaned by an expert computer forensic examiner.
State v. Bates, supra.

The court therefore rejected Bates’ attempt to obtain access to the transcripts of what occurred before the grand jury.  State v. Bates, supra.

I decided to do a post on this opinion because it addresses an issue that, as far as I can tell, has not been addressed by other courts, at least not in published opinions.  Since grand jury law tends to be a bit arcane, lawyers and lay people often do not realize how extraordinarily difficult it is to gain access to transcripts or other information concerning what evidence a grand jury heard as it was considering whether to indict someone.
Posted by Susan Brenner at 9:12 AM