The Tulku, Tweets, Blogging and Stalking 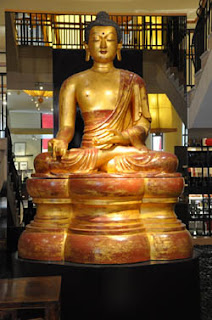 This post examines an opinion from a Maryland U.S. District Court judge that has gotten quite a bit of publicity since it was issued on December 15. The New York Times, for example, called it a “case with potentially far-reaching consequences for freedom of expression on the Internet”.

[William Lawrence Cassidy,] who was then known as William Sanderson, befriended one of the monks of the KPC [the Kunzang Odsal Palyou Changchub Choling, a Maryland Buddhist Center] in 2007; he claimed he was also a Buddhist American tulku and expressed an interest in meeting A.Z. [Alyce Zeoli]. Those close to A.Z. encouraged her to meet with [Cassidy].

Thereafter, A.Z. invited [him] to join her at her retreat in Arizona and [he] asked to ride alone with her in her vehicle. While in the vehicle, [Cassidy] proposed to A.Z., and she declined. He also asked her to pretend they were married. A.Z. confided in [Cassidy] and shared details of her personal life, including the sexual abuse she endured as a child and particulars of the failed relationship with her ex-husband. In response, [Cassidy] asked A.Z. if she wanted him to kill her ex-husband, and A.Z. requested that her ex-husband not be harmed. . . .

[When Cassidy] claimed to have Stage IV Lung Cancer, members of the KPC took care of him, as if these were his final days. At that time, it came to light that [his] real name was William Cassidy. KPC members and A.Z. also began to notice that [his] conduct was inconsistent with this Sect's teachings. For example, he would gossip even though the Sect considers gossip offensive. These incidents led A.Z. to investigate [Cassidy’s] lineage in order to assess whether he was in fact a tulku.

Despite these concerns, . . . KPC promoted [Cassidy] in February 2008 to the position of Chief Operating Officer of KPC. [He] only held this position for two weeks. On February 23, 2008, A.Z. learned that [Cassidy] was never a tulku and confronted him. [Cassidy] immediately left the retreat. . . . [I]n the wake of his departure, [he] used Twitter and Blogs to harass KPC and A.Z.

According to the opinion, this is how Cassidy used Twitter and blogs to harass A.Z.:

As of July 5, 2010, over 350 Tweets were posted on [the Twitter account] `Vajragurl’ that allegedly were directed at A.Z. KPC believes all but a few hundred of the alleged 8,000 Tweets on the `Vajragurl account pertain to A.Z. and KPC.

On November 12 . . . and December 11, 2010, Twitter was served with a grand jury subpoena for the IP addresses accessing the `Vajragurl,’ `aconlamho,’ `kpc_watch,’ and other Twitter accounts.

KPC and A.Z. also claim [Cassidy] used Blogs to harass them. . . . [A] Blog entitled `Digitial Tibetan Buddhist Altar,’ located at http://tibetanalter.Blogspot.com, contains two posts not necessarily directed at A.Z., a statement pertaining to A.Z. and a derogatory statement about KPC. On January 5, 2011, . . . the Government learned that this Blog is registered to [Cassidy].

U.S. v. Cassidy, supra. According to news stories, one of the tweets said “Do the world a favor and go kill yourself. P.S. Have a nice day.”

substantial emotional distress. She fears for her own safety and that of her fellow KPC members. As a result of the alleged harassment, A.Z. has not left her house for a year and a half, except to see her psychiatrist. A.Z. was in such fear for her safety that she did not go to an October 2010 retreat.

The judge began by noting that § 2261A(2)(A) makes it a federal crime for someone acting with the intent to “harass, or intimidate, or cause substantial emotional distress to a person” to use “any interactive computer service. . . to engage in a course of conduct that causes substantial emotional distress to that person”. U.S. v. Cassidy, supra. He also noted that while

numerous court decisions have . . . protect[ed] anonymous, uncomfortable speech and extend[ed] that protection to the Internet, not all speech is protected speech. There are certain `well-defined and narrowly limited classes of speech’ that remain unprotected by the 1st Amendment. See Chaplinsky v. New Hampshire, 315 U.S. 568 (1942). This . . . unprotected speech is limited to, (a) obscenity, . . . (b) defamation, . . . (c) fraud, . . . (d) incitement, . . . (e) true threats . . . and (f) speech integral to criminal conduct. . . Speech that does not fall into these exceptions remains protected.

is directed at protected speech that is not exempted from protection by any of the recognized areas just described. First, A.Z. is a well-known religious figure who goes by the names Alyce Zeoli or Catherine Burroughs. . . . Second, . . . Cassidy's Tweets and Blog posts about A.Z. challenge her character and qualifications as a religious leader. . . .

And, while [his] speech may have inflicted substantial emotional distress, the . . . Indictment is directed squarely at protected speech: anonymous, uncomfortable Internet speech addressing religious matters. . . . Because this speech does not fall into any of the recognized exceptions, the speech remains protected.

He found that 18 U.S. Code § 2261A(2)(A) “amounts to a content-based restriction.” U.S. v. Cassidy, supra. More precisely, he found that because Cassidy was charged with violating § 2261A(2)(A) by “causing substantial emotional distress to A.Z.”, the charge against Cassidy “amounts to a content-based restriction because it limits speech on the basis of whether that speech is emotionally distressing to A.Z.” U.S. v. Cassidy, supra. Since the judge found that the charge against Cassidy was based on the content of the speech he allegedly posted on and transmitted via Twitter, it was then necessary for him to subject the provision to strict scrutiny. U.S. v. Cassidy, supra.

To survive strict scrutiny, the Government has the burden of showing that a content-based restriction `is necessary to serve a compelling state interest.’ See PSI Net, 362 F.3d 227 (4th Cir. 2004). . . . The Government indirectly argues that it has a compelling interest in protecting victims from emotional distress sustained through an interactive computer service. . . . However, the decision in [U.S. v. Playboy Entertainment Group, 529 U.S. 803 (2000)] underscores the fact that the Government's interest is not a compelling one:

`Where the designed benefit of a content-based speech restriction is to shield the sensibilities of listeners, the general rule is that the right of expression prevails, even where no less restrictive alternative exists. We are expected to protect our own sensibilities simply by averting [our] eyes.’

Here, A.Z. had the ability to protect her `own sensibilities simply by averting’ her eyes from [Cassidy’s] Blog and not looking at, or blocking his Tweets.

The judge therefore held that because “the Government's interest in criminalizing speech that inflicts emotional distress is not a compelling one, the statute does not survive strict scrutiny.” U.S. v. Cassidy, supra. He then addressed the government’s argument that § 2261A(2)(A) regulates conduct, not speech. U.S. v. Cassidy, supra.

He noted that in U.S. v. O’Brien, 391 U.S. 367 (1968), the Supreme Court held that if a statute targets both speech and conduct, it must pass intermediate scrutiny to survive a 1st Amendment challenge. U.S. v. Cassidy, supra. A statute that has an “incidental impact” on speech will survive intermediate scrutiny if it (i) furthers an important or substantial governmental interest (ii) that is unrelated to the suppression of free expression and (iii) the incidental restriction on speech is no greater than is essential to further that interest. U.S. v. Cassidy, supra.

The judge found that while preventing “the use of the Internet and other interactive computer services to inflict emotional distress on others [arguably] serves an important governmental interest”, it was questionable whether the

same interest exists in the context of the use of the Internet alleged in this case because harassing telephone calls `are targeted towards a particular victim and are received outside a public forum.’ U.S. v. Bowker, 372 F.3d 365 (6th Cir. 2004). Twitter and Blogs are today's equivalent of a bulletin board that one is free to disregard, in contrast, for example, to e-mails or phone calls directed to a victim.

He then addressed the third factor involved in intermediate scrutiny, i.e., whether the

incidental restriction § 2261A(2)(A) places upon speech is no greater than is essential to the furtherance of that interest. The facts of this case indicate that it does not. [Cassidy and amici curiae] point out that A.Z. is not merely a private individual but rather an easily identifiable public figure that leads a religious sect, and that many of [his] statements relate to KPC's beliefs and A.Z.'s qualifications as a leader. Thus, this statute sweeps in the type of expression that the Supreme Court has consistently tried to protect. . . .

Indeed, the Government does not suggest that its interest in preventing the use of the Internet and other interactive computer services to inflict emotional distress on others would no longer be furthered if the statute did not apply to individuals engaging in political debates or critiques of religious leaders. . . . Notably, the Government never challenges the notion that [Cassidy’s]Tweets and Blog postings are not political or religious in nature.

The judge therefore held that 18 U.S. Code § 2261A(2)(A) “is unconstitutional as applied” in this case, and therefore granted Cassidy’s motion to dismiss the indictment. U.S. v. Cassidy, supra. That ended the case and generated a fair amount of controversy.