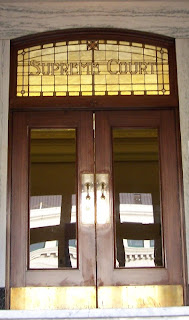 As I’ve explained in other posts, to introduce evidence at trial, the prosecutor or defense attorney must “authenticate” the evidence, i.e., must show that it is what it purports to be. Authentication is a requirement imposed by the rules of evidence, which, as Wikipedia notes, are

the rules and legal principles that govern the proof of facts in a legal proceeding. These rules determine what evidence can be considered by the trier of fact in reaching its decision and, sometimes, the weight that may be given to that evidence. . . .

The requirement of authentication was at issue in a recent opinion issued by the Maine Supreme Court: State v. Churchill, __ A.3d __, 2011 WL 6058016 (2011). After a jury convicted David Churchill of “one count of unlawful sexual contact (Class C)” in violation of 17 Maine Revised Statutes § 255-A(1)(E)”, he appealed, arguing that the trial judge “erred by admitting in evidence a printout of an online chat between Churchill and the victim because the printout was not authenticated pursuant to ‘Maine Rule of Evidence 901(a)’.” State v. Churchill, supra.

Maine’s Rule of Evidence 901(a), which is very similar to the federal rule and rules in other states, provides that “[t]he requirement of authentication or identification as a condition precedent to admissibility is satisfied by evidence sufficient to support a finding that the matter in question is what its proponent claims.” Rule 901(b) gives examples of how this requirement can be satisfied.

David Churchill and the victim, a twelve-year-old girl, were at the victim's home with two of Churchill's friends from the late evening of July 20, 2009, until the early morning of July 21. Churchill, who was twenty-five years old at the time, was a friend of the victim and her mother.

The victim later reported to a friend that sexual acts and contact took place between her and Churchill after her mother left for work on July 21. The victim's mother contacted the Bangor Police Department after the victim's friend informed her of the events. . . .

On July 29, 2009, Detectives Cotton and Beaulieu met with the victim at her home and arranged for her to call Churchill so they could record the conversation and any incriminating statements [he] might make. After several attempts to reach Churchill, his friend answered the telephone and relayed messages between Churchill and the victim.

Churchill and the victim also began chatting with each other online through AOL Instant Messenger while the detectives monitored the screen and recorded the call. . . . During the chat [Churchill] indicated he knew the police were at the victim's house. [She] was unable to elicit any definitively incriminating or exculpatory statements from [him.]

After the conversation ended, the victim emailed

a transcript of the online chat (the `chat log’) to Detective Beaulieu at his Bangor Police Department email address. It is not clear whether the chat log was emailed as an attached document or simply inserted as text into the body of an email. During Detective Cotton's testimony at trial, the State played the recording of the telephone call between Churchill and the victim and offered a printout of the chat log in evidence.

Churchill objected to the admission of the chat log:

He did not allege that the printout indicated any tampering or that it had actually been tampered with. Instead, he argued that the victim should have authenticated the chat log because she created the email from which the printout was generated and Detective Cotton could not be certain the victim had not altered it before sending it to the detectives.

The court conducted a voir dire examination and admitted the chat log after finding that Detective Cotton's testimony had authenticated the document as a printout of what appeared on the computer screen during the online chat.

aimed at capturing sexual predators posed as a thirteen-year-old girl while engaging in a series of online chats with the defendant. A detective from the local police department monitored the chats from the organization's data center as they happened and approved each message the volunteer sent to the defendant. The volunteer testified that the chat logs `were “absolutely” a true and accurate representation of the chat logs as they occurred on-line between [the volunteer] and [the defendant], and that they had not been tampered with.’

We upheld the trial court's ruling that the volunteer's testimony was sufficient to establish authenticity, in part because the volunteer also testified that the chat log was protected from tampering by the organization's practice of uploading the chat logs each day to a data center consisting of three proxy servers in three different states.

The Supreme Court noted that

[a]lthough in Webster the testimony indicated a secure storage process that protected against tampering, a particular storage process is not necessary to demonstrate that electronic evidence has not been tampered with. The hallmark of authentication pursuant to [Maine Rule of Evidence 901(b)(1)] is assurance from the witness that the chat log offered in evidence is a true and accurate representation of the chat as it occurred.

The Supreme Court then explained that

Detective Cotton observed each line of the chat as it appeared on the screen at the same time it was happening. He testified that the victim aided the detectives in `getting a copy of exactly what was on the screen,’ the printout was identical to the chat he observed take place on the computer screen, and he had no doubt the printout was the same chat he observed. He also testified that the victim did not type anything new or change anything before emailing the document to Detective Beaulieu.

The court properly concluded that this testimony was sufficient to authenticate the chat log; whether the chat log was in fact a true and accurate representation of the chat that Detective Cotton witnessed was ultimately a question for the jury.

The court noted that, in this case, the “the detectives' close supervision of both the chat and the victim” provided protection “similar” to the “secure storage [that] lent assurance to the witness’ testimony [in Webster] that the chat long had not been manipulated since its creation.” State v. Churchill, supra. It pointed out that

Detective Cotton testified that he stood over the victim's shoulder with Detective Beaulieu and did not move from that position at any time while the victim saved and emailed the document. Detective Beaulieu also worked with the victim to `capture’ the chat and was involved in the process of obtaining a copy of exactly what was on the screen.

Finally, the Supreme Court found that the chat log was also or in the alternative authenticated under Maine Rule of Evidence 901(b)(4), which states that evidence can be authenticated by its “[a]ppearance, contents, substance, internal patterns, or other distinctive characteristics, taken in conjunction with circumstances.” State v. Churchill, supra. It explained that in State v. Berke, 992 A.2d 1290 (2010),

we upheld the admission of videotapes depicting sexual assault because, together with testimony establishing the identity of the defendant and the victims, the defendant's `continual presence in the tapes and the largely sequential nature of the events depicted in the tapes support an inference that the tapes had not been altered, and that they are what the proponent -- the State -- claimed them to be.’ [State v. Berke, supra.]

Here, the time stamps on each message show an uninterrupted sequence, the messages respond logically to one another, and Churchill's messages respond directly to statements the victim made over the telephone. Other evidence established that Churchill was the person with whom the victim was chatting, so `[n]o greater showing was required.’ [State v. Berke, supra.]

The court therefore affirmed Churchill’s conviction and sentence. State v. Churchill, supra. If you’d like to read more about the case and see a photo of Churchill, check out the news story you can find here.

Posted by Susan Brenner at 1:33 PM