The Cell Phone, Second-Degree Robbery and the Mugshot 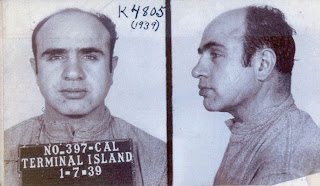 Clemons was using her cell phone when Estrada approached the bus stop on a bicycle. He stood face-to-face with her, straddling his bicycle, and asked to borrow her cell phone. She agreed, and he started providing a phone number for her to dial. After changing the digits of the phone number, he demanded, `Bitch, give me your phone or I am gonna blast you right here.’ He lifted his shirt, revealing what appeared to Clemons to be the black handle of a nine-millimeter handgun tucked into his waistband. Clemons had seen nine-millimeter handguns on other occasions prior to the date of this robbery. She felt afraid, believing Estrada would fire the gun. Estrada snatched the cell phone from her hand and ordered, `Don't fucking turn around or I am gonna fucking blast you, bitch.’ He left on his bicycle.

Clemons rode the bus for about five minutes to the next stop, then walked the half-mile to her home. She dialed 911 and provided a description of the man who had robbed her. The jury heard an audio recording of the 911 call. Officers responded to her home and interviewed her.

Later that day, Clemons requested that her wireless provider disconnect the service to the cell phone Estrada stole. She purchased a new cell phone and activated it, using the same phone number. `All night,’ she received calls on her new phone from people asking to speak with `Jose’ (Estrada's first name) or `Stalker’ (Estrada's admitted nickname). Clemons photographed the incoming call log on her new cell phone and provided the photos to the police.

In the evening after the robbery, Clemons accessed the social media Web site Facebook and was reviewing user profiles, when she observed a photograph of the man who had robbed her. She took `screen shots’ of the Facebook photographs and provided them to the police.
People v. Estrada, supra.
The opinion then explained how local police found and arrested Estrada:
Detective David Duran, the investigating officer on this case from the Pasadena Police Department, testified at trial that he conducted a `records check,’ using the name Jose and the birth date associated with the Facebook profile Clemons provided. The results of his search included photographs depicting the same person pictured in the Facebook photographs. Duran circulated a `wanted persons flier’ with Estrada's photograph and `his last known address.’ Officers arrested Estrada at that address on July 7, 2014.

Detective Duran interviewed Estrada on the day of his arrest, after Estrada waived his Miranda rights. Estrada told Duran he had used the nickname `Stalker.’ Duran asked if Estrada recognized one of the phone numbers from Clemons's incoming call log. Estrada identified the number as Alma Reyes's phone number. Reyes was present with Estrada when he was arrested.
People v. Estrada, supra.
At his trial, Estrada
presented an alibi defense through testimony from his former girlfriend/ mother of his son. She stated Estrada was sleeping in the room he rented in Highland Park around 6:30 a.m. on May 19, 2014 (the same time as the robbery), when she arrived to bring him food.
People v. Estrada, supra.
The opinion then outlines what else happened at Estrada’s trial and thereafter:
Prior to reaching a verdict, the jury submitted a question to the trial court, stating, `In the event that the jury reaches a verdict on one charge but cannot on another, what happens with the result of the case?’ The court responded, `Do your best to reach a verdict/decision on the charge and allegation. Do not be concerned with the procedure or what happens afterward.’ The jury also submitted a request for transcripts of Clemons's cross-examination and defense counsel's closing argument. The court provided a read-back of Clemons's cross-examination and informed the jury it would not hear a read-back of argument because that is not evidence.

The jury found Estrada guilty of second degree robbery and found true the enhancement allegation that Estrada personally used a handgun in the commission of the robbery (§ 12022.5, subd. (a)).

Estrada waived his right to jury trial on the prior prison term enhancement allegation set forth in the information, and the trial court found true that he had served a prior prison term within the meaning of section 667.5, subdivision (b). The trial court sentenced Estrada to eight years and eight months in prison: the midterm of three years for robbery (count 1), plus a consecutive four-year term for the firearm use enhancement and a consecutive one-year term for the prior prison term enhancement; and a consecutive term of eight months (one-third the midterm) for receiving stolen property (count 2) after the pretrial no contest plea. On count 3 for possession of methamphetamine, to which Estrada also pleaded no contest, the court imposed a one-year concurrent term.
People v. Estrada, supra.
The Court of Appeals then took up Estrada’s argument concerning the admission of his “mugshot.” People v. Estrada, supra.  It explained that
[o]ver Estrada's Evidence Code section 352 objection, the trial court allowed the prosecution to introduce Estrada's `mugshot’ or booking photograph for purposes of depicting Estrada's appearance at the time of his arrest. Apparently his hair was longer by the time of trial, a point he conceded in making his objection. Estrada argued the photograph was `very prejudicial’ because (1) it was titled `mugshot,’ (2) he appeared to be `glowering and angry’ in the photograph, and (3) his overall appearance had not changed sufficiently by the time of trial to warrant the photo's introduction. The court overruled Estrada's objection (and later admitted the photograph into evidence), finding the evidence was more probative than prejudicial.

During direct examination, Detective Duran described the photograph as a `booking photograph of Mr. Estrada’ and testified the photograph accurately depicted Estrada's appearance on the date of his arrest in this case. We review the trial court's admission of evidence for abuse of discretion. (People v. Johnson, 61 Cal.4th 734, 767) California Court of Appeals – Fourth District 2015) [`The admission of photographs lies within the trial court's discretion and will not be disturbed absent an abuse of that discretion’].)
People v. Estrada, supra.
The court began its analysis of Estrada’s objection by explaining that he
contends the trial court abused its discretion in admitting the mugshot photograph into evidence because (1) it revealed he had a prior criminal record, (2) it removed the question of identity from the jury, (3) it was not relevant to any material issue at trial, and (4) it was cumulative because Clemons, the victim, already had identified Estrada as the robber before the prosecution introduced the photograph. We reject each of these arguments.

The mugshot photograph did not disclose Estrada's prior criminal record to the jury. As the trial court explained in overruling Estrada's objection to this evidence, `This is the booking photo from this case. I mean, they [the jurors] know he was arrested. He is here in court. He was arrested and charged.’ (Compare People v. Cook (1967) 252 Cal.App.2d 25, 29 [error to admit mugshot taken seven years before trial, indicating the defendant had a prior criminal record].)  Estrada notes there are three different identification numbers on the photograph (an `FCN,’ a `CII,’ and an `OCA’ number), but he does not explain how these numbers would have revealed his prior criminal record to the jury.

The fact the mugshot photograph identified Estrada by name does not mean it removed the question of Estrada's identity as the robber from the jury. The mugshot, coupled with Detective Duran's testimony, merely identified Estrada as the man arrested for the robbery of Clemons. It was for the jury to decide if Estrada, in fact, was the man who had committed the robbery.
People v. Estrada, supra.
The Court of Appeals went on to explain that the
mugshot photograph was relevant to the material issue of identity. Clemons provided the police with copies of photographs she had obtained from Facebook, depicting the man she claimed had robbed her. The purpose of the mugshot was to show the jurors Estrada's appearance at the time of his arrest so they could compare his appearance with that of the man in the Facebook photographs. Because Estrada's hair was longer at the time of trial, the mugshot presented a more accurate comparison. (See People v. Peralez (1971) 14 Cal. App. 3d 368, 377 [p]olice photograph of the defendant taken at the time of his arrest `was relevant to the identity of the [defendant] because of the change in his appearance between the time of booking and the time of trial’.)

Estrada asserts the mugshot photograph constituted cumulative evidence because the prosecution introduced the Facebook photographs and Clemons identified Estrada as the robber in court, before the prosecution introduced the mugshot. We disagree. The mugshot photograph was the only evidence depicting Estrada's appearance at the time of his arrest—less than two months after the crime—that the jury could compare to the Facebook photographs Clemons obtained the same day as the crime, and which she claimed depicted the robber. The trial occurred more than nine months after the crime, and Estrada's hair had grown longer.
People v. Estrada, supra.
The Court of Appeals then articulated its ruling on the issue of whether the trial court judge acted properly in admitting the mugshot:
The trial court acted within the bounds of its discretion in admitting into evidence the mugshot photograph. The probative value of the photograph—Estrada's appearance closer in time to the crime—was not `substantially outweighed by the probability that its admission [would] (a) necessitate undue consumption of time or (b) create substantial danger of undue prejudice, of confusing the issues, or of misleading the jury.’ (California Evidence Code § 352).

Clemons unequivocally identified Estrada in court as the man who robbed her. Other substantial evidence corroborated her identification (e.g., the fact a woman who was present with Estrada at the time of his arrest made multiple calls to Clemons's cell phone number after Clemons reported her cell phone stolen). We have no reason to believe the jury based its true finding on the firearm use enhancement on its response to the mugshot rather than Clemons's testimony regarding her observation of a gun, as Estrada suggests.
People v. Estrada, supra.
For these and other reasons, the Court of Appeals held that the
judgment is modified to reflect the sentence the trial court imposed on count 3, possession of methamphetamine, a violation of Health and Safety Code section 11377, subdivision (a): a one-year concurrent term. In all other respects the judgment is affirmed.


People v. Estrada, supra.
(If you're wondering whose mugshot is included with this post, it's Al Capone.)
Posted by Susan Brenner at 8:48 AM