The Hampton Inn, the iPad and Identity Theft 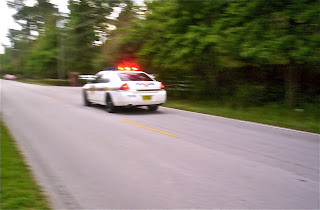 
Stephanie Hess testified that on October 10, 2010, she was working at the front desk of the Hampton Inn and Suites in downtown St. Petersburg. She testified that a woman named Crystal Brown arrived between 12:30 and 1:00 a.m. and checked into a room for one night. Ms. Brown had made the reservation through the website Travelocity, and Mr. Henderson was with her when she checked in at the hotel.


About ten minutes after Ms. Brown checked in, a representative from Travelocity called Ms. Hess and told her that Ms. Brown's credit card was declined.  Ms. Hess transferred the call to Ms. Brown's room. The representative from Travelocity called again and told Ms. Hess that Ms. Brown was going to come back to the front desk and pay for the room. Ms. Hess waited about ten to fifteen minutes, and when Ms. Brown never came back to the front desk to pay for the room, she called the police.


Officer Brian Bilbrey and another officer arrived about fifteen minutes later. Bilbrey testified that he was responding to a call regarding a person who had used a fraudulent credit card to purchase a room through an online travel service. Upon arrival, they went to Brown's hotel room with another hotel employee. The employee knocked on the door several times for `a good two minutes’ and there was no response. The hotel employee opened the door and they could see that the room was empty.


There were no lights on inside the room, and there were no personal items in the room except for an iPad left underneath the edge of one bed in plain view. Because there were no other personal belongings in the room, such as luggage, clothes, or a toothbrush, they concluded the room had been vacated. Bilbrey took the iPad from the room to determine who owned it. After talking again to Hess, Bilbrey contacted the Travelocity employee, who informed him that Brown had used a credit card belonging to Lisa Nelson, who lives in Minnesota, when she made the hotel reservation with Travelocity.


Getting back to the facts, Bilbrey was not able to


determine who owned the iPad because there was no identifying information on the outside of the iPad. In an attempt to locate the name of the owner, he looked for the serial number of the iPad by pressing the stand-by button and looking at the settings application. While Bilbrey was obtaining the serial number of the iPad, he noticed the notes application had been open and he touched that icon. Several names with fifteen to twenty-digit numbers and dates appeared on the open note, which Bilbrey believed were credit card numbers and expiration dates. Bilbrey then went back to the police station to create a photo lineup of Brown to show to Hess.
Brown later called the hotel between 2:00 and 2:30 a.m., and Hess told her she was no longer welcome at the hotel.  Brown then came back to the hotel with Henderson about an hour and a half to two hours after the room had been searched and asked for the iPad. However, by this time, Bilbrey had left the hotel with the iPad. Hess called Bilbrey and informed him that Brown and Henderson were at the hotel, and she informed them that Bilbrey was returning to the hotel. Brown and Henderson did not want to wait at the hotel for Bilbrey to arrive with the iPad and they left the hotel again.


When Bilbrey arrived back at the hotel, he telephoned Brown, who stated that she was driving back to the hotel. However, from the background noise on the telephone, it sounded like Brown was not in a car and was most likely standing close to the hotel. Bilbrey broadcast a description of Brown and Henderson on the police radio, and they were found about 300 yards away from the hotel in a park watching Bilbrey.


Officers brought the pair back to the hotel and Bilbrey read them the Miranda warnings. When asked separately about the iPad, Brown stated that she purchased the iPad with cash several months ago, but Henderson claimed a relative had given him the iPad. Neither Brown nor Henderson provided Bilbrey with the serial number of the iPad.


Finally, the opinion explains that


Detective Nancy Pillucere investigated the possible fraud case and, as part of that investigation, called Lisa Nelson, the owner of the credit card Brown had used. Nelson did not know Brown or Henderson and she had never given either of them permission to use her credit card. Pillucere then interviewed Brown, who stated that Henderson was with her when she purchased the iPad at Best Buy and they both used it, but she was the person who paid for it.
Brown then gave Pillucere consent to search the iPad. Pillucere testified that Brown also gave her consent to search other computers and hard drives that were recovered that night.


After hearing the evidence presented at the hearing, the trial judge denied Henderson’s motion to suppress because she found Henderson had “no standing” to argue that the search of the iPad violated the 4th Amendment  Henderson v. State, supra.


The court also noted that there was another problem with Henderson’s appeal.  Rule 9.140(b)(2)(A) says a defendant must “expressly reserve the right to appeal a Prior dispositive order” of the trial court, if he/she specifically identifies the “point of law” at issue.  Henderson v. State, supra.  The majority found that the


suppression of the iPad was not dispositive of the case. At the sentencing hearing, the State announced a factual basis for the charges, indicating that in addition to the iPad, the officers had obtained the victims' information in a vehicle and Henderson admitted to his involvement in the offenses. It was also noted that Brown had previously entered a plea to these charges and the offense of fraudulent use of a credit card.


Therefore, Brown may have been agreeable to testify against Henderson. Additionally, according to Pillucere's testimony at the suppression hearing, other computers and hard drives were recovered that evening. . . . Even if Henderson had prevailed in this appeal, it appears that the State may have been able to proceed to trial.


One of the Court of Appeals judges wrote a concurring opinion in which he analyzed the issue the trial judge relied on:  standing.  Henderson v. State, supra.  He began his opinion by noting that “I write only to remind counsel that to present a legal challenge to the constitutionality of a search, a defendant must establish a reasonable expectation of privacy in the item searched.”  Henderson v. State, supra.


The concurring judge then pointed out that the Florida Supreme Court


has held that 4th Amendment rights are personal and a defendant has the burden to establish that his own Fourth Amendment rights have been infringed.” Hicks v. State, 929 So.2d 13 (2006) (citing Rakas v. Illinois, 439 U.S. 128 (1978)). A defendant must establish a privacy expectation in not only the place searched but also the item seized. . . . In most instances, to comply with this legal standard, it will be necessary for the defendant to testify.


The judge noted that to “establish what has been traditionally referred to as `standing,’ Henderson had to demonstrate that he personally had an expectation of privacy in the iPad and that this expectation was reasonable.”  Henderson v. State, supra.  As Wikipedia explains, and as I have noted in prior posts, the test the U.S. Supreme Court uses (as do lower courts) to decide if someone had a 4th Amendment expectation of privacy in a place or thing, and therefore had standing to challenge a search, is whether (i) they subjectively believed it was private and (ii) society will accept their subjective belief, if proven as objectively reasonable.


He also noted that Henderson bore the burden of proof on this issue. Henderson v. State, supra.  And the judge explained that the record of the proceedings in the case


discloses that scant evidence was brought forth to meet this burden of proof. The evidence consisted of a law enforcement officer's unobjected to hearsay testimony that Henderson had told him that the iPad belonged to him. As Henderson did not testify, no other proof was adduced to support his reasonable expectation of privacy in the iPad.


This court noted that `[a] search violates a defendant's 4th Amendment rights only if (1) a defendant demonstrates that he or she had an actual, subjective expectation of privacy in the property searched and (2) a defendant establishes that society would recognize that subjective expectation as objectively reasonable. Id. . . . This court held Hicks failed to carry his burden to establish that he had a reasonable expectation of privacy in the computer where he never introduced any evidence at the suppression hearing. Hicks, supra.


Similar to Henderson's case, a deputy testified that Hicks told him at the scene of the traffic stop that his uncle gave him the computer, but Hicks failed to introduce any evidence at the hearing relating to his ownership, such as whether he had any programs on the computer or how long he had used the computer.


This court held that where there was only testimony from the officers at the suppression hearing, `Hicks failed to demonstrate an actual, subjective expectation of privacy in the computer.’ Id. This court fnoted that even if Hicks had met this burden, in order to challenge the search of the computer, `he would still have to establish that society would have accepted such an expectation as reasonable—an unlikely scenario.’ Id.


Finally, the concurring judge explained that “in addition” to ownership, the


Here, Henderson did not present a scintilla of evidence that he possessed or controlled the iPad on the day in question, much less that he had the authority or power to exclude other persons from using the iPad. See U.S. v. Lyons, 992 F.2d 1029 (U.S. Court of Appeals for the 10th Circuit 1993). (noting `expectations of privacy derive in part from the right to exclude others from the property in question, lawful possession is an important consideration in determining whether a defendant had a legitimate expectation of privacy in the area searched, i.e. the hard disks’); see also Rawlings v. Kentucky, 448 U.S. 98 (1980) (petitioner did not meet his burden to establish that he had a legitimate expectation of privacy in his girlfriend's purse and therefore could not successfully move to suppress drugs found in the purse). Further, there was no evidence concerning the frequency, extent, or purpose of Henderson's historical use of the iPad.


So, for all these reasons, the Court of Appeals affirmed Henderson’s conviction and sentence. Henderson v. State, supra.