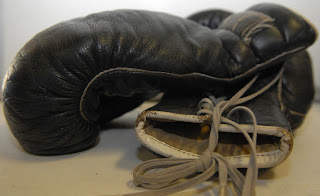 According to the opinion, this is how the case arose:

In early December 2008, Hinojosa joined friends and family at victim J.A.'s house for a birthday party and to watch a boxing match. Hinojosa, disappointed his fighter lost, began challenging other people there to a fight. Hinojosa succeeded in starting a fight with several others at the party, including B.B. and J.A. During the fight, Hinojosa stabbed B.B. and J.A., puncturing one of J.A.'s lungs. After B.B. subdued him, Hinojosa left.

The prosecution’s brief on appeal adds a few more details:

J.A. and his longtime girlfriend, Kandice Donham, planned two parties at their house for Saturday, XX/XX/2008: an afternoon party for their son's birthday and an evening party to watch The Dream Match, Manny Pacquiao versus Oscar De La Hoya. . . . About 10 to 20 adults attended the boxing match, including [Hinojosa], Kandice's brother-in-law. . . .

During the fight, [Hinojosa], a Pacquiao fan, began arguing with a De La Hoya fan. . . . [Hinojosa] was the aggressor, so J.A. and Kandice asked him to leave. . . . Agitated, [he] slowly made his way to the front door, challenging J.A. to a fight and displaying a knife. . . . But Alex Flores, J.A.'s brother, punched [Hinojosa] before he made it outside. . . .

The result was a four person fight in the front yard: one fight involving J.A. and [Hinojosa] and a separate fight involving Flores and Jose Hinojosa, [Hinojosa’s] brother. . . . The number involved grew to five when B.B., J.A.'s friend, threw [Hinojosa]to the ground and started punching him. . . .

J.A. had eight stab wounds, two incise wounds, and was struggling to breathe. . . . He went the emergency room at the Casa Grande Regional Hospital, and Doctors discovered that he had a punctured lung. . . . He was transferred to a Phoenix hospital, had a tube inserted in his chest, and spent 7 days in the hospital. . . .

Hinojosa made several arguments on appeal, only one of which we are concerned with.  He argued that the trial judge “erred by admitting hearsay evidence about text messages in violation of” Arizona Rule of Evidence 802.   State v. Hinojosa, supra.

As I’ve noted in earlier posts, the rules of evidence applicable in every state and in the federal judicial system bar the use of “hearsay.”  Rule 801(c) of the Federal Rules of Evidence defines hearsay as “a statement, other than one made by the declarant while testifying at the trial or hearing, offered in evidence to prove the truth of the matter asserted.” Every U.S. state has a similar provision. Rule 802 of the Federal Rules of Evidence (and similar state provisions, like the Arizona rule at issue in this case) says hearsay “is not admissible unless provided by these rules”.
Why is hearsay excluded (except if it comes within certain exceptions)? It’s a matter of common sense and fairness.
If hearsay weren’t excluded, John Doe could take the stand and say Jane Doe told him the defendant – Richard Roe – who’s on trial for murder confessed to the whole thing. That puts Roe in a really bad place: If the jury believes what John says – that Jane heard Roe confess to the murder for which he is on trial – they’re almost certainly going to convict him (unless he’s arguing self-defense, say). Roe can use cross-examination to try to show John is a liar or is mistaken or is insane or otherwise can’t be believed, but neither he nor his lawyers can do much with Jane because she isn’t there . . . she’s a declarant who isn’t testifying at the trial.

That brings us back to the Hinojosa case.  As the Court of Appeals noted, hearsay

`a statement . . .  the declarant does not make while testifying at the current trial or hearing . . .  offer[ed] in evidence to prove the truth of the matter asserted in the statement.’ Arizona Rule of Evidence 801(c). Hearsay is inadmissible unless an exception applies.

State v. Hinojosa, supra.  Wikipedia lists the hearsay exceptions, if you are interested.

This is what the opinion says about the text message at issue (as far as I can tell, there was only one):

M.V., fifteen years old at the time of the crime, testified that a fight `exploded in the house,’ that `everybody was fighting everybody’ and that he was `the only teenager there.’ He saw the adults go outside, and then saw J.A. come back in `covered in blood.’

M.V. testified [at trial that] he did not go outside and did not see Hinojosa stab J.A. He saw J.A.'s stab wounds and concluded Hinojosa stabbed J.A. `[b]ecause [Hinojosa] was the aggressor . . .  [a]nd since he threw the first punch and it escalated outside, I just figured . . . it was him.’ M.V. was responsible for watching small children when the fight began. M.V. sent his mother a text message, stating [Hinojosa] `stabbed J[.A].’

Before M.V. testified at his trial, Hinojosa

objected to his proposed testimony about the text message as hearsay, on the ground that M.V. would be relating what others had told him. The prosecutor avowed M.V.'s text was `a conclusion that he drew based on what he observed.’

The trial court asked whether M.V. had to perceive something to relate it and the prosecutor responded that M.V. did perceive the fight and then drew a conclusion. Hinojosa did not disagree with the prosecutor or expand on his own objection. The court overruled the objection.

On appeal, the prosecution argued that the text message was admissible under one of the exceptions to the default rule barring the use of hearsay:  the “excited utterance” exception.  State v. Hinojosa, supra.  As the Court of Appeals explained,

[a]n excited utterance is a `statement relating to a startling event or condition, made while the declarant was under the stress of excitement that it caused.’ Arizona Rule of Evidence 803(2).

`This exception to the rule generally barring the admission of hearsay turns on three factors: there must be a startling event, the words must be spoken soon afterwards, and the words must relate to the startling event.’ State v. Hausner, 230 Ariz. 60, 280 P.3d 604 (Arizona Supreme Court 2012).

State v. Hinojosa, supra.  For more on the excited utterance exception, check out Wikipedia’s entry on it.

Hinojosa argued that the text message was not admissible under the excited utterance exception because “M.V. did not actually see him stab the victim.” State v. Hinojosa, supra.  The Court of Appeals, though, did not find that significant:

[T]hat argument goes to M.V.'s competency to testify under Arizona Rule of Evidence 602, which states `A witness may testify to a matter only if evidence is introduced sufficient to support a finding that the witness has personal knowledge of the matter.’

And because Hinojosa did not cite Rule 602 or make any other foundational objection in the trial court, even in response to the court's statement that the witness had to perceive something to testify about it, his argument is forfeited absent fundamental, prejudicial error.  See State v. Moody, 208 Ariz. 424, 94 P.3d 1119 (Arizona Supreme Court 2004) (absent fundamental error, overruled objection to evidence on one ground waives objection on another on appeal).

But because Hinojosa has not argued admission of this evidence amounted to fundamental error and we do not find that it was, this argument is waived. . . . And, to the extent Hinojosa argues M.V.'s statement was unreliable, that argument goes to its weight not its admissibility. See State v. Jeffers, 135 Ariz. 404, 661 P.2d 1105 (Arizona Supreme Court1983). Accordingly, we do not address this argument further.

State v. Hinojosa, supra. (For more on the weight of evidence versus its admissibility, check out the article you can find here.)

As to the admissibility of the text message under the excited utterance exception, the Court of Appeals explained that

M.V. testified he sent the text message contemporaneously with an event that would be startling and stressful for a teenager charged with the care of young children, and described what he observed and what he thought was going on in response to the startling event. Analyzing it under the hearsay exceptions, M.V.'s testimony therefore was admissible as an excited utterance. . . .

Because we conclude testimony about the text message was admitted properly as an excited utterance, the trial court did not abuse its discretion.

Hinojosa lastly contends the trial court erred in imposing flat-time sentences for each of his convictions, as opposed to allowing him to earn one day of earned release credit for every six days he is incarcerated pursuant to Arizona Revised Statutes § 41-1604.07(A).

The state concedes the court improperly sentenced him to flat-time sentences for both convictions and acknowledges we should vacate his sentences and remand for re-sentencing.

Posted by Susan Brenner at 5:28 AM