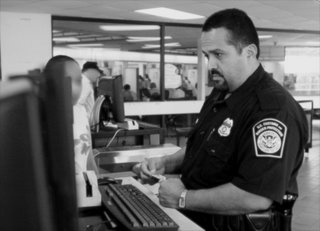 I've done several posts on the legal issues that arise from airport searches and seizures of laptop computers.

N. Furukawa, who is being prosecuted federally for possessing child pornography, moved to suppress the evidence seized from his laptop and statements he made during the laptop search at the airport.

The district court's opinion describes what happened, in detail, and I thought you might find it interesting. United States v. Furukawa, 2006 WL 3330726 (District of Minnesota, November 16, 2006).

United States Customs and Border Protection Officer Jeffrey R. Schmidt was on duty at Minneapolis/St. Paul International Airport during the afternoon hours on April 20, 2006. . . . Officer Schmidt . . . was conducting baggage searches when he encountered defendant Furukawa at approximately 1:30 p.m. Mr. Furukawa was being processed through United States customs upon arrival on an international Northwest Airlines flight from Tokyo, Japan. He was waiting in line for a routine inspection after being been referred from passport screening to "baggage control secondary" based upon a computer screen alert indicating that he may have purchased access to a Internet site that contained child pornography. The referral was made by Customs Officer Bulov.

After gaining access to the designated program, Schmidt began a search for video and picture files which are construed as merchandise for customs purposes. The officer discovered a file list and thumbnail photos which included materials that were suspected to be pornographic. At that time he took the computer to his supervisor's office so that the screen would not be open to public viewing. Upon further examination of the files Officer Schmidt observed photos which appeared to be pictures of pre-teen girls engaged in acts of a sexual nature. He also found materials that were on the computer in violation of copyright protections and those materials were deleted or destroyed on site. The officer then closed the laptop computer and called his duty supervisor. In addition, agents from Immigration and Customs Enforcement were contacted. The laptop was seized along with 14 other items. Officer Schmidt's search lasted approximately one-and-a-half hours.

ICE Special Agent Paul Nichols arrived at the airport customs area at approximately 3:00 p.m. There he met with Special Agents Lang, Boyle and Yira. . . .The agents found and reviewed images on the laptop computer which were determined to be representations of child pornography. Meanwhile, Special Agent Lang, a computer forensics specialist, examined the external hard drive containing approximately 30,000 files and discovered numerous additional file names that suggested the existence of pornography.

Special Agent Nichols thereafter met with the defendant and identified himself. The agent read aloud the Miranda rights from a written U.S.I.C.E. Statement of Rights form . . . . The defendant stated that he understood each of his rights as they were read to him, and he himself read the rights. Mr. Furukawa printed his name and signed and dated the express waiver of rights contained on the bottom of the Statement of Rights form. The signature was witnessed in writing by Special Agent Nichols and Yira. At that time the defendant had not been placed under arrest and was not in handcuffs, though he was not free to leave. The defendant and the agents were located in a corner in the secondary inspection area which is not open to the public.

Defendant Furukawa stated that he was willing to answer questions and that his occupation was Internet business consulting. He indicated that his occupation involved searching the Internet for pornography and that he sometimes encountered child porn as an incident to the occupation, particularly as part of a mass download of pornographic materials, but that his clients were not producers of child pornography. The defendant acknowledged that he owned the laptop and the external hard drive that were examined by customs agents. He was cooperative and provided appropriate answers to questions posed by agents, but he did not himself ask any questions, and he declined to answer certain questions. The interview lasted approximately one hour and there was no request that questioning cease and no request for the assistance of an attorney.

During the interview the defendant was provided water on request and no threats were made to induce cooperation. He was advised that the reason for his detention was the discovery of child pornography on his computer. . . . In addition to the oral interview questions, the defendant provided written answers to some but not all of the written questions that were presented to him on a typed DHS/ICE Computer Forensics form. . . . The questions and answers on the form related to defendant's computer ownership, operating systems, and user and sign-on names and passwords. Mr. Furukawa described himself as an "expert user" in response to a question on the forensics form, and he provided a list of e-mail addresses.

I am the defendant in this case. I feel honored that you decided to use my case in your blog.

There are few things I would like to point out:
1. I did object to entering of my password, but was told I was required to. There are cases, which say that something done by the suspect as a result of show of of authority by the law enforcement is not voluntary. “A request that cannot be refused without negative consequences is coercive.”, INS v. Delgado, 466 U.S. At 216-217. Airport stops are inherently intimidating and justify a presumption that a reasonable person would not feel free to leave. United States v. Berry, 670 F.2d 583 at 596-97.

2. The only suspicion came from information that “he MAY have purchased access to a Internet site that contained child pornography.” Magistrate's Report and Recommendation. Emphases added, searches that are intrusive require at least reasonable suspicion. See United States v. Montova De Hernandez, 473 U.S.531 at 541. “ Reasonable suspicion is defined as a particularized and objective basis for suspecting the particular person of smuggling contraband.” United States v. Rivas, 157 F.3d at 367. Such suspicion must be based upon “Specific facts which, taken together with rational inferences therefrom, reasonably warrant an intrusion.” United States v. Cardenas, 9 F.3d at 1153.

So I feel that the district judge errored when he opined that information customs had was enough particularized information that I was carrying contraband at the time of the search.

If administrative searches are allowed to serve “general interest crime control, the Fourth Amendments would do little to prevent such intrusions from becoming a routine part of American life.” Indianapolis v. Edmond, 531 U.S. 32, 42

It seems I would have to fight this in Eighth Circuit if I am convicted.

Here is a caselaw which backs up my argument that reasonable suspicion did not exist. In United States v. Hensley, 469 U.S. 221 (1985), supreme court held that reliance on a flyer or bulletin can justify a brief detention but can do so only if the officer who issued the flyer or bulletin had articulable facts supporting reasonable suspicion that the person wanted had committed an offense.