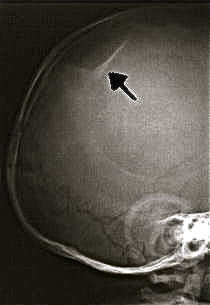 After being charged with “with simple assault, aggravated assault and endangering the welfare of a child”, Michele Renae Hunter filed a “pretrial motion in limine seeking to exclude from evidence text messages (texts) sent between her and her co-defendant”, whom the opinion refers to only as “Husband.”  Commonwealth v. Hunter, __ A.3d __, 2013 WL 150779 (Superior Court of Pennsylvania 2013).  The trial court denied the motion after he held a hearing on it.  Commonwealth v. Hunter, supra.

To understand the charges and the motion in limine, it is necessary to understand how the case arose:

The attending pediatrician on staff at the hospital where B.H., Jr., was taken for treatment opined that there is a high probability that he will suffer lasting brain damage as a result of the injury.  The doctor also noticed that B.H., Jr., had bruising over his entire back, consistent with hand prints, as well as on both arms and elbows. The doctor noted that child abuse was suspected.

Initially, Hunter told the police that on March 16, 2011, B.H., Jr., had been upstairs and had fallen and reopened an old cut on his chin. She also told the officers the boy had passed out in the bathroom, fell, and was non-responsive and had difficulty breathing. Days later, Hunter told authorities she had not given accurate information regarding how the child became injured and that on March 15, 2011, she had pushed [him] down, causing him to hit his head.

She said he became unresponsive and she was unable to rouse him by carrying him to the bathroom and splashing cold water in his face. She said the boy remained relatively unresponsive (`limp’) throughout the day, falling in and out of periods of responsiveness. He was unable to move his limbs or sit up on his own.

The opinion also says that Hunter also told the authorities that “throughout the day” on March 15,

she began sending Husband texts at work, describing the boy's deteriorating condition over a 36–hour span. B.H., Jr., was unable to walk or sit up on his own that evening and was put to bed by Husband and Hunter, both of whom checked on him throughout the night.

The next morning, . . . [he] was able to walk with some assistance, [but] continued to exhibit many of the symptoms from the day before. That evening, as Husband carried his son into his bedroom, B.H., Jr. began gasping for breath and went into cardiac arrest. He was rushed to the hospital.

In her motion, Hunter argued that the texts would not be admissible at a trial on the charges because Pennsylvania’s “statute regarding privileged confidential communications between spouses” would bar their use.  Commonwealth v. Hunter, supra.  As Wikipedia explains, U.S. law generally recognizes two distinct privileges:

the communications privilege and the testimonial privilege. Both types of privilege are based on the policy of encouraging spousal harmony, and preventing spouses from having to condemn, or be condemned by, their spouses.

In this case, Hunter sought to invoke the spousal communications privilege, which is a

form of privileged communication which protects the contents of confidential communications between spouses during their marriage from testimonial disclosure. The privilege applies in civil and criminal cases.

Both the witness-spouse and the party-spouse hold the spousal communications privilege, so either may invoke it to prevent the other from testifying about a confidential communication made during marriage.

(And as Wikipedia notes, the spousal testimonial privilege “protects the individual holding the privilege from being called to testify by the prosecution against his spouse/the defendant.”  We will get to that privilege later.)

More precisely, Hunter sought to invoke the privilege codified in 42 Pennsylvania Consolidated Statutes § 5914, which provides as follows:  “Except as otherwise provided in this subchapter, in a criminal proceeding neither husband nor wife shall be competent or permitted to testify to confidential communications made by one to the other, unless this privilege is waived upon the trial.”

The judge who wrote this opinion began by noting that while “the privilege was enacted to preserve marital harmony by encouraging free marital communication, allowing spouses to confide freely, and protecting the privacy of marriage”, courts should also recognize that “excluding information may not always further the intended goal of a privilege and may . . .  hinder . . . legal proceedings intended to protect fragile members of society.” Commonwealth v. Hunter, supra.  She also noted that “[o]ne such instance is in the prosecution of child abuse cases when the perpetrator(s) involved are spouses and at least one is the parent of the minor child.”  Commonwealth v. Hunter, supra.

The judge explained that under one section of Pennsylvania’s Child Protective Services Law (CPSL) -- 23 PennsylvaniaConsolidated Statutes § 6381(c) -- “confidential communications between spouses are admissible in any proceedings regarding child abuse or the cause of child abuse.”  Commonwealth v. Hunter, supra.  She also noted that in Commonwealth v. Spetzer, 572 Pa. 17, 813 A.2d 707 (Pennsylvania Supreme Court 2002), the court found the CPSL is relevant to the interpretation of § 5914 in a

more subtle and indirect fashion. The Court in [Commonwealth v. May] recognized that the question of what is a `confidential’ communication turns in part on the reasonable expectation the declarant has that the communication will remain confidential. 540 Pa. 237, 656 A.2d 1341-42 [Pennsylvania Supreme Court 1995].

Even if it is assumed that § 6381(c) does not directly provide a broad child abuse exception to § 5914's application in criminal proceedings, it certainly affects what a spouse's `reasonable expectation’ of continued confidentiality may be with respect to marital communication that reveal the previous or intended abuse and intimidation of a child.

Here, the Superior Court also noted that while communications between spouses are

presumed to be confidential under § 5914. . . it has long been recognized that whether a particular communication is privileged depends upon its nature and character and the circumstances under which it was said. . . . It is essential that the communication be made in confidence and with the intention that it not be divulged. . . . [I]t is the burden of the party opposing the privilege to overcome the presumption of confidentiality.

confidential where she testified they had been the subject of a Children and Youth hearing . . . and where the record reflects that Hunters' texts had been at issue in an August county child welfare agency hearing that `likely contained information that would be material to [Hunter's] guilt or punishment [in the criminal proceedings].’ . . . Because the texts cannot be considered confidential under the facts of this case, § 5914 does not apply to exclude Hunter's texts from evidence.

But the Superior Court went further, considering yet another reason why the texts would not be inadmissible.  It noted that its decision would provide “some consistency” in the

application of § 5914 and our Commonwealth's spousal testimonial privilege, codified at 42 PennsylvaniaConsolidated Statutes § 5913.  In 1989, the legislature enacted the section 5913 privilege, which provides an exception to the general prohibition of spouses testifying against each other when the criminal proceeding involves bodily injury or violence . . . done or threatened upon the minor children of husband and wife, or the minor children of either of them. . . .

The [§ 5913] privilege is . . . distinct from the privilege . . . in § 5914. . . . [W]e find no rational basis for not having a child abuse exception under § 5914 as well. The lack of an exception under § 5914 not only trivializes the import of child abuse, but fails to recognize that the effect of admitting these communications outweighs any benefit in upholding the sanctity of the spousal privilege.

The court explained that the § 5914 privilege is much more limited than the § 5913 privilege, because it “only bars a spouse's testimony if it pertains to a communication made by the party-spouse” but the testimonial privilege in § 5913 “bars a court from compelling any testimony from a witness in a martial relationship with a party in a court proceeding.”  Commonwealth v. Hunter, supra (emphasis in the original).  So, even if Hunter’s texts were not admissible under § 5913, under the child abuse exception in

It seems illogical to potentially hinder the Commonwealth's child abuse case by excluding at trial, as per section 5914, critical communications regarding that abuse made between spouses -- especially where more than 90% of reported child abuse cases stem from abuse that occurred in the home. . . .

The Superior Court therefore held that when “a defendant-spouse is the alleged perpetrator in current child abuse proceedings and where that abuse forms the basis of criminal proceedings against that defendant-spouse, the § 5914 privilege shall not apply at the defendant's criminal trial to preclude admission of spousal communications.” Commonwealth v. Hunter, supra.  It therefore affirmed the trial court’s order denying Hunter’s motion in limine.  Commonwealth v. Hunter, supra.

If you would like to read a little more about the case and see a photo of Hunter, check out the news story you can find here.