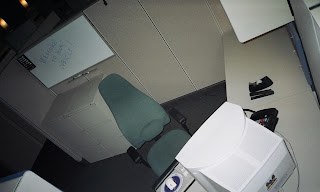 This post is about a federal case in which the defendant argued that certain emails should not be admitted into evidence at his trial for “Federal Program Bribery and Extortion Under Color of Official Right” because the government seized them in violation of his rights under the 4th Amendment. U.S. v. Hamilton, 2011 WL 1366481 (U.S. District Court for the Eastern District of Virginia 2011). The opinion I’m working from doesn’t explain how Philip Hamilton came to be charged with these offenses, but the news story you can find here gives you some context on the case.

[i]n addition to serving as a member of the Virginia General Assembly, on August 16, 2006, Hamilton was employed by the Newport News Public Schools (`NNPS’) in Newport News, Virginia. As a school employee, Hamilton had an assigned workplace computer and was afforded access to the NNPS electronic communications system. The relevant e-mails were sent and received by Hamilton using his NNPS work e-mail account.

As this article explains, in deciding whether or not a public employee had a 4th Amendment expectation of privacy in emails sent from or received via an employer’s computer system, courts look to see if the employer had a computer/electronic device use policy in effect and, if so, what the policy provided. Since Hamilton used his NNPS email account to send and receive the emails at issue,

[c]ritical to the analysis of both questions [i.e., the 4th Amendment issue and the martial privilege issue] before the Court is whether the NNPS had a computer workplace use policy in effect which limited Hamilton's expectation of privacy. The government concedes that the NNPS did not have a technology acceptable use policy in effect on August 16, 2006. NNPS, however, adopted a computer use and privacy policy on June 19, 2007. . . . The policy was revised and republished on July 15, 2008. . . . The revised policy provided in pertinent part:

It’s not enough, of course, just to have a policy. For a policy to bind an employee, the employee must have (i) gotten notice of the provisions of the policy and the fact that it has gone into effect and (ii) indicated his/her willingness to abide by it. In this case, the government presented testimony from John J. Bowden, Jr., “the supervisor of the NNPS computer network,” that the policy described and quoted above were

disseminated to all school personnel in 2007 and 2008. In addition, Bowden indicated that in 2008, a document entitled `Frequently Asked Questions,’ which reiterated the privacy policy, was electronically sent to all NNPS employees. . . .

The evidence further revealed that forms acknowledging this policy were electronically signed in Hamilton's name on his assigned computer on February 1, 2008 and October 24, 2008. . . . Bowden also testified that the NNPS computer system has a message or banner which appears on every computer screen at the time users log on, which clearly restates this policy. According to Bowden, in order to progress to the next step in the log-on process, the user must press a key to acknowledge this message, which process cannot be bypassed. The log-on banner contains the following message:

`This NNPS computer system including Internet and e-mail access is provided only for authorized use. All computers may be monitored to ensure that use is authorized and to verify operational security. All data stored or transmitted over this system may be monitored. Unauthorized use may subject the user to criminal prosecution and evidence of this use may be used for administrative or other adverse action.’

Hamilton argued that the government’s evidence “falls short of demonstrating that he personally read the privacy policy or log-on banner or even electronically signed the acknowledgment.” U.S. v. Hamilton, supra. The judge who has this case disagreed:

Although no published workplace computer policy was in effect in August 2006, the above described policy had been conspicuously in effect for over two years when federal agents executed a search warrant on September 2, 2009 and seized the contents of Hamilton's computer. The e-mails which the government seeks to introduce were discovered during an examination of messages stored on Hamilton's assigned computer.

Hamilton, however, argued that in

defining the boundaries of his expectation of privacy, the Court should focus on the day of the e-mail transmission, August 16, 2006, and not September 2, 2009, the day on which the stored contents of his computer were seized. Absent a published policy limiting workplace computer privacy in effect at the time the August 16, 2006 transmission was stored, Hamilton claims a reasonable expectation of privacy.

the immediate case, the NNPS policy made clear that the limitation on computer privacy applied not only to transmissions sent and received, but also to those that were stored. When the search warrant was executed on September 2, 2009, Hamilton was on long-standing notice that the contents of his computer were subject to inspection. He therefore lacked an objectively reasonable expectation of privacy in the stored August 16, 2006 e-mails.

(Oh, and if you’re wondering, the judge also held that Hamilton waived the application of the marital privilege to the emails because he “was aware that his employer had access to the contents of his computer and took no steps to safeguard the electronic messages between him and his wife. At the very least, he could have deleted them from the system, which he did not.” U.S. v. Hamilton, supra.)

So Hamilton lost, and the emails will presumably be introduced by the prosecution at his trial after it begins this May.