The Sheriff, Welfare Fraud and Defamation 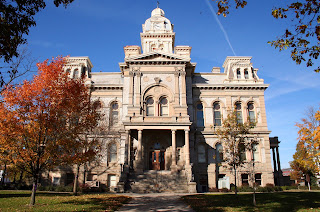 This post examines an opinion an Ohio court issued in a civil case:  Hughes v. Lenhart, 2015 WL 1138262 (Ohio Court of Appeals 2015).  The Court of Appeals begins its opinion by explaining how the case arose:

On February 21, 2014, [Christine] Hughes filed a complaint for defamation, false light, and intentional infliction of emotional distress against [Shelby County Sheriff John R. Lenhart and Shelby County Deputy Sheriff Patrick Goldschmidt]. The complaint alleged that Lenhart, in his capacity as Sheriff of Shelby County, had held a press conference regarding a crackdown on welfare fraud with Hughes' photograph prominently displayed behind him. . . .
The department had allegedly also provided to the media a photo of Hughes inferring that she was connected to the criminal use of sex, drugs, and alcohol for the purposes of committing welfare fraud. . . . The press conference was widely distributed and was placed upon the Sheriff Department's Facebook page. . . .
Hughes, who was a registered nurse and part owner of a local business and who had no felony criminal history, learned of the use of her photo through a friend on January 24, 2014, and after a Google search found numerous articles linking her image to the welfare fraud case. . . . Hughes then contacted the Sheriff's Department. . . .
On January 25, 2014, a deputy with the department responded to her concerns and apologized for the misuse of her photograph. . . . The deputy allegedly determined that a woman with the same name was the one connected with the case, but Hughes' photograph was the one submitted to the media. . . . Hughes then began to receive messages and posts from others regarding her connection to the case. . . .
Hughes alleged that Lenhart and Goldschmidt had disseminated her photograph to the media as well as their own facebook page and indicated that she was involved with the welfare fraud case. . . . Hughes alleged that she had to defend herself and that multiple responses indicated that people believed the information disseminated by the Sheriff's Department. . . .
The Sheriff's Department issued a retraction on January 25, 2014, however the retraction merely indicated that the Department had `provided the wrong mug shot or otherwise photograph of a convicted felon or individual charged with a criminal act’, thus implying that Hughes was nonetheless still either a convicted felon or charged with a different criminal act. . . . Based upon the alleged defamatory statements, Hughes claimed to have suffered economic and personal loss to her career and reputation. . .

Hughes v. Lenhart, supra.  You can read more about the facts in the case in the news stories you can find here, here and here.
The Court of Appeals explains that, as to Hughes’ claims against Lenhart, the

first cause of action alleged that the defendants had committed defamation by falsely claiming that Hughes had been convicted of fraudulently securing dental services. The complaint alleges that this action was either intentional or reckless.

sole assignment of error addresses the appropriateness of the trial court's granting of the motion to dismiss. In Ohio, a complaint need only set forth a `short and plain statement of the claim showing that the party is entitled to relief.’ Ohio Rules of Civil Procedure 8(A). Ohio does not mandate that every fact be set forth in a complaint, just facts sufficient to put the defendant on notice.
An order granting a motion to dismiss for failure to state a claim upon which relief may be granted is reviewed de novo. Doe v. Bath Local School District, 2014–Ohio–4992 (Ohio Court of Appeals 2014). In reviewing the motion, the court must accept all factual allegations in the complaint as true. Doe v. Bath Local School District, supra. All inferences must be resolved in favor of the non-moving party. Doe v. Bath Local School District, supra.

Hughes v. Lenhart, supra.
The court then took up the substance of the defendants’ argument in their motion:

Hughes v. Lenhart, supra.
The Court of Appeals went on to explain that the

defenses of governmental subdivisions and its employees are set forth in Ohio Revised Code 2744.03. Generally, governmental subdivisions and its employees are immune from all liablility unless one of the exceptions listed in the statute applies. Ohio Revised Code 2744.03(A).
[Lenhart’s and Goldschmidt’s] liability was alleged to stem from an exception to immunity found in Ohio Revised Code 2744.03(A)(6). Absent one of these exceptions, employees of government subdivisions have immunity from all civil suits based upon their actions in the scope of their employment.`In addition to any immunity or defense referred to in division (A)(7) of this section and in circumstances not covered by that division or sections 3314.07 and 3746.24 of the Revised Code, the employee is immune from liability unless one of the following applies:(a) The employee's acts or omissions were manifestly outside the scope of the employee's employment or official responsibilities.(b) The employee's acts or omissions were with malicious purpose, in bad faith, or in a wanton or reckless manner;(c) Civil liability is expressly imposed upon the employee by a section of the Revised Code. Civil liability shall not be construed to exist under another section of the Revised Code merely because that section imposes a responsibility or mandatory duty upon an employee, because that section provides for a criminal penalty, because of a general authorization in that section that an employee may sue and be sued, or because the section uses the term “shall” in a provision pertaining to an employee.’

Hughes v. Lenhart, supra (quoting Ohio Revised Code § 2744.03(A)(6)).
The Court of Appeals then began its analysis of the propriety of the trial judge’s granting the motion to dismiss, noting that the

complaint does not allege that there is a section of the revised code that expressly imposes liability upon [Lenhart and Goldschmidt] and none is clear from the face of the complaint. Thus, section (c) does not apply.
Likewise, updating the public regarding criminal activity in the area is not `manifestly outside the scope of the employee's employment or official responsibilities.’ Thus, section (a) also does not apply. This leaves only section (b).

Hughes v. Lenhart, supra.
Next, the court took up that issue, explaining that Huges argued that the

use of her picture in relation to a criminal story in which she was not a party falls under section (b)'s exception to immunity. A review of the complaint, viewed in a light most favorable to Hughes, could indicate that [Lenhart and Goldschmidt] acted with malicious purpose, in bad faith, or in a wanton or reckless manner.The complaint states that the Sheriff's Department showed the image on January 24 and had apologized and removed the photo on January 25. The Department explained that the real offender was a woman with the same name and that they had mistakenly used the wrong photo. However, the retraction still indicated that Hughes was either a convicted felon or had been charged with a criminal act.The complaint states that Hughes has never been convicted nor charged with a criminal felony. Based solely upon what is stated in the complaint, Hughes has alleged facts sufficient to give notice of the offenses and to raise the exceptions to governmental immunity found in Ohio Revised Code § 2744.03(A)(6)(b).The allegations in the complaint allege that the conduct was either intentional or reckless, which would be an exception to the statutory immunity of the named defendants. Thus, the trial court erred in finding that no claim for relief had been stated when the complaint alleges facts sufficient to set forth claims and to raise the exceptions to governmental immunity by [Lenhart and Goldschmidt]. The assignment of error is sustained.


If you are interested, the news stories you can find here and here review the court’s ruling and its import.
Posted by Susan Brenner at 9:01 AM