Shortfalls, Theft and Tampering with Documents 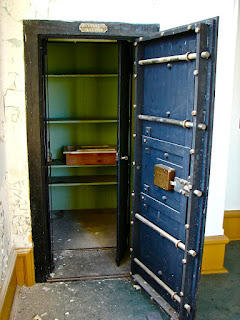 Before we get into the facts in the case and the argument Owens made on appeal, we need to define  what he was convicted of.  New Jersey Statutes § 2C:20-3(a) states that a “person is guilty of theft if he unlawfully takes, or exercises unlawful control over, movable property of another with purpose to deprive him thereof.”  And New Jersey Statutes § 2C:21-4 states that a person

Now, the facts:  According to the opinion, Owens was

employed as the Teaneck branch manager of the Fairleigh Dickinson University Credit Union, having assumed that position temporarily at the end of November 2007 when the prior manager resigned. Part of [his] duties included reconciling the actual amount of cash in the Credit Union's vault with the computerized account ledger.

The only other employee at the Teaneck branch was a part-time teller, Melanie Lerner. Lerner did not have the security code or key to open the branch, nor did she have the access code to the vault where the branch's cash was kept.

Lerner believed she was never in the vault alone. Records disclosed that only [Owens’] access code was used to open and close the Teaneck branch between January 2, 2008 and January 18, 2008.

Shareatha Owens, who is not related to Terrell Owens, was the operations officer at the Credit Union's Madison and Teaneck branches and

audited the money in the vault of the Teaneck branch in November 2007, prior to [Terrell Owens’] assuming the position of manager.  At that time, all money at the branch was accounted for. Thereafter, [Terrell Owens] called her `[a]lmost everyday’ because of problems he had balancing the vault cash, but he never indicated any money was missing.

State v. Owens, supra.  (Since we have two people named Owens, I’m going to use first names from here on.)

doing a `weekly cash order,’ i.e., seeing how much cash was actually on hand and making sure it was adequate to service the Credit Union's customers. She accessed the computerized ledger system and noticed entries totaling $9700 in the balance sheet's `nondenominational field.’

This field represented money that physically existed but was damaged and needed to be removed from circulation. [At trial,] Shareatha testified that in her many years of experience with the Credit Union, the aggregate amount in the nondenominational field was about $500.

She called [Terrell] and asked if he made these entries. He admitted he had done so in order to balance the vault. Shareatha explained that if the damaged money was removed from the computerized ledger, the vault would necessarily be short, and she directed [him] to `recount his vault and to call [her] back.’

Shareatha reported the problem to the Credit Union's Chief Executive Officer, Judith Kehres, and proceeded to the Teaneck branch with her fellow employee and [Terrell’s] direct supervisor, Ayeisha Robinson.

When she testified at trial, Kehres also read portions of a letter Terrell “sent to the National Credit Union Administration, the government agency that monitors and insures credit unions, dated April 29, 2008.” State v. Owens, supra.  In it, he claimed that “he noticed shortfalls in deliveries of cash from the Federal Reserve as soon as he arrived at the Teaneck branch and `was ignored’ when he reported them.” State v. Owens, supra  Kehres testified that he “was supposed to notify her whenever a `cash delivery’ was incorrect, but he never did.”  State v. Owens, supra.

After the prosecution presented its evidence, Terrell moved for a judgment of acquittal under New Jersey Rule of Criminal Procedure 3:18-1, but the judge denied the motion.  State v. Owens, supra. Robinson then testified as a defense witness. State v. Owens, supra.  She shared an office with Shareatha in the Madison branch of the Credit Union, and she claimed Terrell called “in early January because he was `missing a significant amount of money.’”  State v. Owens, supra.

When Terrell testified, he claimed he did not know

what happened to the missing money. He claimed that he usually left the code to the vault taped to his desk under his computer keyboard.

[Terrell] also stated that Shareatha specifically told him that if he had a problem balancing the monies in the vault, he should enter any shortfall in the nondenominational sheet on the computer ledger.

[He] claimed he specifically contacted Shareatha on January 2, 2008, the date an entry first appeared, and was given this advice. He did the same on two other occasions in January.

He raised one issue on appeal:  Terrell claimed that “the state failed to prove beyond a reasonable doubt” that he “was guilty of theft or falsifying/tampering with evidence.” State v. Owens, supra.  Basically, he seems to have argued that the trial judge should have granted his motion for acquittal.  State v. Owens, supra.

In ruling on his argument, the Appellate Division noted that when a trial judge rules on a motion for acquittal, he or she must apply the following standard:

`[W]hether[ ] viewing the . . .  evidence in its entirety, . . . and giving the State the benefit of all its favorable testimony as well as all of the favorable inferences which reasonably could be drawn therefrom, a reasonable jury could find guilt of the charge beyond a reasonable doubt.’

The Appellate Division also noted that it reviews a judge’s denial of a motion for acquittal under a de novo standard, i.e., as if it were writing on a clean slate. State v. Owens, supra.  The court then found that

[w]hile the State's case was entirely circumstantial, the evidence of [Terrell’s] guilt was substantial and sufficient to prove his guilt beyond a reasonable doubt. At the branch, only [he] had the access code to the vault, and only his code was used to open and close the branch office.

The money in the vault was reconciled before [Terrell] arrived as branch manager, and the videotape equipment was working and recording at that time. Less than two months later, the video recording system was not recording, the camera was pointed away from the vault and a substantial sum of money was missing.

[Terrell] had no explanation as to why the money was missing at the time it was discovered and his subsequent claim that he had reported shortfalls in the deliveries from the Federal Reserve was refuted by Kehres.

The Appellate Division therefore affirmed his conviction and sentence.  State v. Owens, supra.
Posted by Susan Brenner at 9:58 AM