Larceny, Conversion and the Restaurant Server 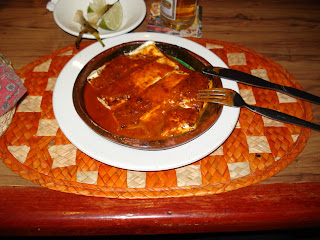 After being convicted of felony larceny in violation of Wyoming Statutes § 6-3-402(a) and sentenced to “three to five years of imprisonment,” which the judge suspended “in favor of seven years of supervised probation”, Francis Xavier Guerrero appealed.  Guerrero v. State, __ P.3d __, 2012 WL 1948861 (Supreme Court of Wyoming 2012). Section 6-3-402(a) states that anyone who “steals, takes and carries, leads or drives away property of another with intent to deprive the owner or lawful possessor is guilty of larceny.”

The charge, and the conviction, arose out of his employment “as a server at the Tortilla Factory restaurant in Cheyenne from August, 2006 to November, 2008.”  Guerrero v. State, supra. More precisely, it arose from the computer system the restaurant’s servers used to place orders and generate bills:

Each server uses a unique two-digit code to log into the computers' cashier program, which keeps track of a server's total amount of sales, number of food items sold, voided orders, and discounts issued during a shift. Discounted and voided orders must be approved by a restaurant manager and entered into the computer using a manager's five-digit code.

Because the computers do not hold cash, [Guerrero] and the other servers at the restaurant were required to hold money received from cash-paying customers until the end of a shift. When a server's shift was over, the server would print out an individualized server report from the restaurant's computer system and turn over an amount of cash, checks, and credit card receipts equaling the server's total amount of sales, less any voids and discounts, as reflected on the server report.

On November 14, 2008, as Guerrero was logging into the restaurant computer’s

cashier program, another employee at the Tortilla Factory observed [him] enter a four- or five-digit code into the program, which was represented by four or five asterisks on the computer screen. This attracted the employee's notice because all of the servers at the restaurant were identified by two-digit codes, and only restaurant managers logged into the computer using five-digit codes. When [Guerrero] saw the employee standing behind him, he cleared the transaction and positioned himself so the employee could no longer see the screen.

The next day, the employee who observed all this described what she had seen to

her supervisor, Isabell Tapia, who managed the restaurant with her brothers, Sam and Martin Tapia. At the end of the day, when [Guerrero] handed in his server report, Ms. Tapia noticed an abnormally large number of voids and discounts on the report. Seven other servers worked on November 15, and twenty-three orders were voided that day.

[Guerrero’s] server report indicated he voided nineteen of those orders. Similarly, a total of thirty-seven discounts were entered that day, and thirty-four were attributed to [him]. Ms. Tapia had been the only manager on duty during [his] shift, and had not approved any of [his] voids or discounts.

The “inordinate number of voids and discounts” had gone unnoticed during Guerrero’s employment for “over two years” as a server, “despite the fact that the restaurant managers carefully scrutinized the server reports of other employees during the same period.”  Guerrero v. State, supra. The records indicated Guerrero “had used Sam's manager code to enter voids and discounts on days when Sam was not working.”  Guerrero v. State, supra.

The Tapias went to the police and, as noted above, Guerrero was charged with and convicted of felony larceny. Guerrero v. State, supra.  The Information in the case alleged that Guerrero

Prior to trial, both the prosecution and Guerrero’s defense lawyer submitted proposed jury instructions to the judge.  As Wikipedia notes, jury instructions are “the set of legal rules” jurors are to follow when they are deciding a “civil or criminal case.” And as Wikipedia explains, in the United States jurors are the trier of fact, i.e., they decide what, if any, elements of the charged crime has been proven beyond a reasonable doubt.  In doing that, they rely on the judge’s instructions, which will break the crime down into its specific elements.

Guerrero’s lawyer “proposed that the jury be required to find that he [s]tole, took and carried, led or drove away’ property of another with intent to deprive,” an instruction that tracked the language of  Wyoming Statutes § 6-3-402(a).  Guerrero v. State, supra.  The prosecutor “submitted a proposed instruction requiring the jury to find [Guerrero] `took’ property of another.” Guerrero v. State, supra.

The trial judge drafted an instruction that would have required the jury to find that he “`took’ property of another”, but modified it at the jury instruction conference. Guerrero v. State, supra.  At trial, the judge instructed the jury that to convict Guerrero, they had to find that these elements had all bee proven beyond a reasonable doubt:

5. Property of another, money belonging to the Tortilla Factory, of a value greater than One thousand dollars ($1,000.00);

6. With intent to deprive Tortilla Factory, the owner or lawful possessor.

At trial, the prosecution claimed Guerrero had been “voiding and discounting customer orders without the customers' knowledge, and retaining the difference between the full prices paid by the customers and the discounted prices reflected on [his] server reports.” Guerrero v. State, supra.  It relied on the testimony of Isabell and Sam Tapia and that of other witnesses, plus Guerrero’s server records. Guerrero v. State, supra.

The Supreme Court began its analysis of the arguments by noting that “the crime of larceny, in its ordinary form, is separate and distinct from the crime of larceny by bailee under Wyoming [Statutes § 6-3-402], notwithstanding the fact that the crimes share the same statutory appellation.”  Guerrero v. State, supra. As noted above, Guerrero was convicted of larceny under Wyoming Statutes § 6-3-402(a), which creates what the court called “larceny in its ordinary form”.  Wyoming Statutes § 6-3-402(b) creates larceny by bailee, making it a crime for a “bailee . . . or any person entrusted with the control, care or custody of any money or other property who, with intent to steal or to deprive the owner of the property, converts the property to his own . . . use”.

The prosecution conceded, on appeal, that “the omission” of the “taking” and “carrying away” elements needed to convict someone of “larceny in its ordinary form” was error, but it claimed the error didn’t’ prejudice Guerrero because the evidence of his guilt was “`overwhelming.’”  Guerrero v. State, supra. The Supreme Court found it did not need to address “the instructional error” because the evidence was not sufficient to convict Guerrero of “larceny in its ordinary form.”  Guerrero v. State, supra.

was ever in possession of the money alleged to have been stolen from the restaurant. . . . [T]he State's evidence, which showed the restaurant did not have a central register where cash could be deposited, established that the money received by [Guerrero] from restaurant patrons was never transferred to the Tortilla Factory's possession. . . .

Ms. Tapia testified that the computer in the dining room did not have a cash drawer. She stated that `Each [server] collects the cash from the customer . . . and they save it with them until the end of the night and then they break their own change. They collect all the guest checks. They are cashiers themselves.’

(In other words, since the Tapias never had possession of the money, Guerrero could not "take" and "carry it away" from them.  The same principle would prevent him from being prosecuted for embezzlement.)