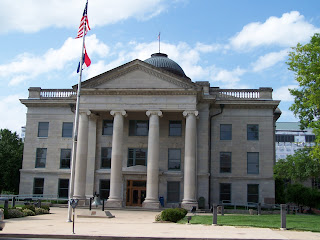 After being convicted on “one count of possession of child pornography, [Missouri Revised Statutes] § 573.035, and one count of promoting child pornography in the second degree, [Missouri Revised Statutes] § 573025, David Sachs appealed.  State v. Sachs,  __ S.W.3d __, 2012 WL 1392574 (Missouri Court of Appeals 2012).  In his appeal, Sachs “challenge[s] the admission of evidence recovered as a result of a warrantless search of his personal computer”, and issue we’ll get to in a moment.  State v. Sachs, supra.

Anderson had decided to seize the computer until a warrant could be obtained. Before unplugging the computer to take it, he decided to . . . examine the programs currently running on the computer. From icons shown on the bottom, right corner of the computer screen, Anderson could tell several programs were running in addition to the word processing program shown on the screen. One of [them] was LimeWire, which [Sachs] admitted having used to download music and videos. When Anderson clicked on that icon to open that program, he was able to see files were being downloaded and uploaded at that time. He took pictures of the screens showing lists of the filenames being uploaded and downloaded.

On appeal, Sachs argued that the trial judge denied his motion to suppress the evidence obtained from his computer because “the search of his computer by Anderson before a warrant was obtained violated his constitutional right to be free from unreasonable, warrantless search.”  State v. Sachs, supra.  As Wikipedia explains, and as I’ve noted in earlier posts, the 4th Amendment creates a right to be free from “unreasonable” searches and seizures; to be “reasonable,” a search or seizure must be conducted pursuant to a valid search warrant or pursuant to an exception to the warrant requirement.  Wikipedia outlines the exceptions, if you’re interested.

The Court of Appeals began its analysis of Sachs’s argument by “by stating the obvious. When Anderson began clicking on icons on [Sachs’] computer screen to view different programs that were not openly visible on the computer screen, he was conducting a search.”  State v. Sachs, supra.  Since clicking on the icons constiuted a search, it violated the 4th Amendment unless the search was conducted pursuant to a warrant or an exception.

The prosecution’s first argument was that the exigent circumstances exception “justified the detective's actions in accessing the active programs because information in the computer's RAM (random access memory) would disappear when the officer unplugged the computer to seize it.”  State v. Sachs, supra.  As Wikipedia notes, this exception lets officers act without a warrant in which “people are in imminent danger, evidence faces imminent destruction, or a suspect will escape.”  The state relied on the second option, but the Court of Appeals was not persuaded:

[T]his case simply does not establish any pressing need for the officer to unplug the computer prior to obtaining a warrant. Three officers were present . . . and had fully secured the scene. The State failed to prove . . . exigent circumstances that would preclude an officer from remaining with the computer while a warrant was obtained.

The State's argument . . . is based entirely upon a presumption of inconvenience for the officers and [Sachs’] roommates. Such circumstances are not exigent and most certainly do not establish `a need that will not brook the delay incident to obtaining a warrant.’ [State v. Warren, 304 S.W.3d 794 (2010).] . . . [I]f Anderson truly believed that valuable evidence might be lost through the unplugging of the computer, he should have waited until a warrant was obtained and then conducted his search of the files active on the computer.

The court also rejected the prosecution’s argument that exigent circumstances existed because Sachs’ was “actively” uploading and downloading “files of some type”.  State v. Sachs, supra.  The Court of Appeals’ response was that the prosecution’s argument that “the transfer of files of an unknown nature might be completed by the time a warrant was obtained is akin to saying that an officer couldn't wait for a wiretap warrant because the suspect was on the phone and might finish his conversation before a warrant could be obtained.”  State v. Sachs, supra.

The prosecution then argued that `regardless of whether Anderson's actions in opening the active files on [Sachs’] computer violated the 4th Amendment, the evidence was properly admitted at trial based upon the inevitable discovery doctrine.”  State v. Sachs, supra.  The court began its analysis of this issue by outlining the applicable law:

`[T]he inevitable discovery rule . . . provides that evidence obtained through unlawful means may be admissible if it can be shown the same evidence would have been inevitably discovered in a lawful manner.’ State v. Grayson, 336 S.W.3d 138 (Missouri Supreme Court 2011). `To show that the evidence would have inevitably been discovered, the state must prove by a preponderance of the evidence: (1) that certain standard, proper and predictable procedures of the local police department would have been utilized and (2) those procedures inevitably would have led to discovery of the challenged evidence through the state's pursuit of a substantial, alternative line of investigation at the time of the constitutional violation.’ [State v. Oliver, 293 S.W.3d 437 (Missouri Supreme Court 2009).]

In applying this standard, the court found, first, that “access to the active files on the computer to view and take pictures of the active programs was” not inevitable because Anderson testified “to his intent to turn off, unplug, and remove the computer from the premises prior to applying for a warrant” which meant that “as a result of [his] own actions, the ability to view and photograph the active programs would not have existed by the time a warrant could be obtained for a lawful search to have been conducted.”  State v. Sachs, supra.  It therefore held that the inevitable discovery doctrine did not justify “admission of the pictures of the active computer screens or Anderson's testimony related to his access of the active programs”.  State v. Sachs, supra.

It also found, however, that to “the extent [Sachs] challenges the seizure of the computer's hard drive and admission of the evidence recovered as result of a forensic examination of the hard drive after a search warrant was obtained, . . . that evidence would clearly have been inevitably discovered.”  State v. Sachs, supra.  The court noted that Anderson “had more than sufficient probable cause to obtain a search warrant in light of [Sachs’]previous admission that he had downloaded child pornography and some child pornography was likely still on his computer.” State v. Sachs, supra.

In making this finding, the Court of Appeals rejected Sachs’ argument that the evidence should be suppressed as “fruit of the poisonous tree” because Anderson “referenced” the “unlawfully obtained evidence” analyzed above in his application for the search warrant.  State v. Sachs, supra.  As Wikipedia notes,

[f]ruit of the poisonous tree is a legal metaphor in the United States used to describe evidence that is obtained illegally. The logic . . . is that if the source of the evidence (the `tree’) is tainted, then anything gained from it (the `fruit’) is tainted as well.

It found that in this case, when the unlawfully obtained evidence was “disregarded,” the remaining information in the affidavit established probable cause. State v. Sachs, supra. The Court of Appeals held, therefore, that the “evidence recovered from the hard drive would have inevitably been discovered regardless of Anderson's improper search of the active files on the computer, and the trial court did not err in admitting that evidence at trial.”  State v. Sachs, supra.

For this reason and others, it affirmed Sachs’ conviction and sentences.  State v. Sachs, supra.
Posted by Susan Brenner at 8:08 AM

What a moron. Dude should have just kept his mouth shut and told the cops to take a hike. He'd be a free man now.