Unauthorized Use of Property, Theft in Office and Merger 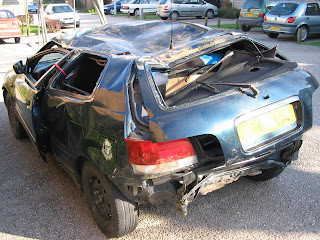 After she was convicted of unauthorized use of property in violation of Ohio Code § 2913.04 and theft in office in violation of Ohio Code§ 2921.41, Tonya Claborn appealed.  State v. Claborn, 2012 WL 1078930 (Ohio Court of Appeals 2012).  (In case you were wondering, she was sentenced “to two years of community control under basic supervision under the condition that she remain in full-time employment.”  State v. Claborn, supra.)

The case began on May 17, 2009 when Claborn was in a car accident involving two other cars:

[O]ne of the cars stopped in a non-turning lane to make a left turn. When [Claborn] stopped, she was hit from behind by another car. The turning car continued on, as [Claborn] and the driver of the third car pulled over. The driver of the car who hit [her] from behind provided her with the name Marcus Jones and a phone number, but left before the police could be contacted. Before he left, [Claborn] took a picture of his license plate with her phone. The other car returned to the scene, and she also took a picture of that car's license plate.

Part of her job included working on special projects that involved using obituaries and prison publications to verify that people who died or were imprisoned were not receiving workers' compensation benefits. These projects were known to, and approved by, [Claborn’s] supervisor. To perform these duties, [she] had access to several computer information services that are not readily accessible to the general public, namely Accurint and ISOnet.

On May 20, Claborn had a recorded conversation with

her insurance company about her claim. In this conversation, appellant was the first to use the name `Eshay Stanley,’ and she told the investigator she had not spoken to Stanley since the crash. When she was asked how she obtained Stanley's information, she told the investigator, ‘I can't tell you where I got the address from. It came from where his plates are registered.’

Fodor then reviewed Claborn’s usage of

Accurint for that week and found the two license plate searches [she] ran on May 18. Fodor . . . had never seen a BWC investigation request that required license plates to be run. Upon confirming that the license plates were not run as part of a field investigation request, Fodor contacted his supervisor with the information he had gathered and his concerns. He obtained the police report associated with [Claborn’s] accident and confirmed that the plates that were run were the same plates involved in the accident.

The information was passed on to Joe Montgomery, a Deputy Inspector General for BWC, who called Claborn into his office, where she “engaged in a recorded interview, under oath” with Montgomery and another man.  State v. Claborn, supra.  She admitted she “`verified the plate number of the gentleman that hit me’” but denied “`run[ing] any reports”.  State v. Claborn, supra.  That led to this exchange:

MONTGOMERY: Okay. So you ran the plate number of the gentleman that hit you from behind?

MONTGOMERY: Okay. And you ran that through Accurint?

MONTGOMERY: And you did that at work with your work computer.

MONTGOMERY: Do you admit that that was not related to state business?

As to the unauthorized use of property conviction, Claborn argued, on appeal, that she ran

The Court of Appeals rejected this claim, noting that Claborn’s searches “benefited her, not BWC.”  State v. Claborn, supra.  It also found that, based on the evidence presented at trial, “the jury could have reasonably concluded that [she] obtained the information on her own, she knew she had no permission to run the searches for her own benefit, and her actions were unauthorized.”  State v. Claborn, supra.

shall commit any theft offense when the property or service involved is owned by the state of Ohio. A public official is defined as `any elected or appointed officer, or employee, or agent of the state or any political subdivision. . . . ‘ Ohio Code § 2921.01(A). At the time of the offense, [Claborn] was an employee of BWC, and as such was a public official under § 2921.41. Claborn, as an employee of the state, committed a theft offense . . . using the state's computer and the state's access to Accurint.

Claborn also made a technical argument, relying on Ohio Code § 2941.25(A), which states that “[w]here the same conduct by defendant can be construed to constitute two or more allied offenses of similar import, the indictment or information may contain counts for all such offenses, but the defendant may be convicted of only one.”  The statute seems to implement a version of the doctrine of merger of offenses in criminal law.

Claborn argued that the trial court “erred by convicting . . . her on the allied offenses of unauthorized use of property and theft in office”, and the prosecution agreed.  State v. Claborn, supra.  In analyzing the issue, the Court of Appeals noted that Ohio Supreme Court articulated a “two-part test to determine whether two offenses are allied under this statute” in State v. Williams, 124 Ohio St. 3d 381 (2010).

First, we compare the elements of the two crimes. If the elements of the offenses correspond to such a degree that the commission of one crime will result in the commission of the other, the crimes are allied offenses of similar import, and we proceed to the second step. . . . Second, we review the defendant's conduct to determine whether the defendant can be convicted of both offenses. If we find that the crimes were committed separately or that there was a separate animus for each crime, then the defendant may be convicted of both offenses. . . .

The Court of Appeals then found that the trial judge erred in not merging the convictions and sentence Claborn for only one offense:

[T]he elements of the crime of unauthorized use of property and the elements of the crime of theft in office correspond to such a degree that they are allied offenses of similar import. Further, [Claborn’s] searches on her BWC computer caused her convictions for both crimes. There was no separate animus, as [she] committed both offenses through this single act. Where there are two allied offenses of similar import, the state may try both, but if the defendant is convicted of both offenses, the state must decide which offense will merge into the other, and defendant must be sentenced for the single offense.

It therefore remanded the case to the trial judge for “the proper merger and resentencing of the convictions for unauthorized use of property and theft in office.”  State v. Claborn, supra.
Posted by Susan Brenner at 8:36 AM