The BlackBerry, Contempt and the TRO 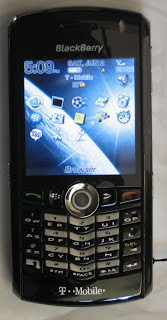 As Wikipedia explains, “contempt of court” refers to the issuance of

a court order which, in the context of a court trial or hearing, declares a person or organization to have disobeyed or been disrespectful of the court’s authority. Often referred to simply as `contempt, such as a person `held in contempt,’ it is the judge’s strongest power to impose sanctions for acts which disrupt the court's normal process.

This post is about a recent New Jersey decision that involved a man’s appealing his conviction for contempt in violation of New Jersey Statutes § 2C:29-9(b), which provides, part, as follows:

[J.P.] and his wife N.P. were estranged. N.P. revealed her intention to speak to a lawyer because the marriage `was not reconcilable’ and she `could not[,] for the safety of [herself] and [the] children[,] stay in that situation.’ Thereafter, [J.P.] repeatedly avowed N.P. `was not to leave him.’ [He] also `threatened to take the kids and the house[,] . . . to default on the [mortgage] loan[,]’ and to tell the police that N.P. kidnapped their children if she did not stay with him. Finally, [J.P.] sent a text message, which N.P. perceived as threatening. The message stated: `If you want it, your [sic] gonna get it.’

N.P. sought protection by filing an ex parte complaint, alleging domestic violence and barring defendant's contact and communication with N.P. N.P.'s request was granted. The Family Part entered a TRO [Temporary Restraining Order], which in part enjoined [J.P.’s] commission of further acts of domestic violence, prohibited any oral, written, personal, electronic or other forms of contact with N.P., and precluded [him] from further harassing communication. The police personally served [J.P.] with the TRO on April 8, 2010 at 7:50 p.m.

instantly transmitted through her BlackBerry cellular telephone. The email's subject line was entitled `Docupemnt [sic] to [N.]’ and generally contained chronologically listed journal-type entries documenting [J.P.’s] activities and thoughts from the prior week. Most . . . referred to N.P. in the third-person. One entry however, dated April 2, 2010 and labeled `a tidbit from a conversation with N.,’ addressed N.P. directly, stating:

`What I was really trying to tell you earlier was that time is on our side, and in the event we decide to discuss all of this and try to make it work for all parties involved, there will be no stone unturned on my behalf, I want you to know, for as long as it may take to make it right, ill [sic] be by your side with patience, friendship, the love of our children, and a common vision to make the next day a better one than the previous. . . .I don't want to fail at this, and I will have more patience, you deserve more than what I've been giving, but I want you to know, I can do it. Don't count me out just yet. Many more chapters have been stand [sic] to be written for us, rough times are ahead, tough times are ahead, it will get tougher before it gets easier. And trust me, I understand that until you say its [sic] time, it stays the way it does right now. I will not take anything for granted, just because you may decide to go with me to a psych appointment doesn't mean your [sic] coming back . . . You're not coming back until you decide, if ever. I got it. That's all I have to say, just understanding, friendly discussions, and a common goal of our children from here on out. Are we cool? Can we get along and talk without hurting each other for our kids?’

`What I say is from the heart. . . . I'm just trying to say I'm sorry in so many ways. . . . Please understand I'm not trying to annoy you, I'm just so afraid of losing my family. I will give you the space.’

her he wanted to `make it clear how he felt’ and expressed she was not to leave him. She described the email's contents, stating although it was formatted as a journal log, it included `a part that . . . you can tell he's actually talking to me.’ N.P. avowed these statements were not part of the conversation between her and [J.P.] on the entry date, stating: `There are things in here that are directed right at me and cannot be perceived as a conversation[.]’

depicting his version of events. He stated he often used his BlackBerry's note-taking function to document events, record his thoughts concerning the marriage, to `clear his head’ and to share these thoughts with his therapist and attorney. [J.P.] explained that in order to use the notes captured on his BlackBerry, he was required to forward them to his computer email account, thus enabling the printing of a hard copy. [He] asserted he intended to send the email to himself for use the following day during an appointment with his attorney, but mistakenly sent it to N.P.

The family court judge who entered the TRO and who presided over the contempt trial issued an oral opinion in which he found that the prosecution had proved J.P. was guilty of contempt beyond a reasonable doubt. State v. J.P., supra. The judge explained that

a TRO was granted on April 8th . . . [J.P.] was served with the [TRO] . . . by Patrolman Venning on the same date. The TRO prohibited [him] from returning to the scene of violence and future acts of domestic violence. . . .

[J.P.] was also prohibited from having any oral, written, personal, electronic or other form of contact with the plaintiff. . . . Therefore, . . . the first element of the violation has been proven by the State.

As to the second element, [J.P.] was aware there was a temporary restraining order in place when the text message was sent at 10:43 p.m. on the same evening. [N.P.] indicated in her complaint that [J.P.] was constantly telling her their marital relationship was not over and it comes through that this was [sic] his thoughts in his journal entries that he did not want to let the relationship go. The journal entries are phrased in a way that it does seem to the [c]ourt that the communications [sic] to [N.P.] that he does try to explain his actions and good intentions were to make the marriage work. As a result, the [c]ourt can only conclude that it seems these messages were purposely sent to [her].

As noted above, J.P appealed. He claimed the prosecution “failed to prove the requisite intent required for a contempt conviction.” State v. J.P., supra. In reviewing his argument, the Appellate Division noted that to convict someone of contempt under New Jersey Statutes § 2C:29-9(b), the prosecution must prove beyond a reasonable doubt (i) that a TRO was entered under the Prevention of Domestic Violence Act, (ii) the person charged with contempt violated the order and (iii) the person charged with contempt acted purposely or knowingly in violating the TRO. State v. J.P., supra.

The Appellate Division then pointed out that “[i]n this matter, there is no dispute that a TRO had been entered or that [J.P.] knew the order was entered and had been provided with a copy, which he acknowledged receiving.” State v. J.P., supra. The court also noted that “the fourth paragraph of the TRO unequivocally prohibited” J.P. from contacting “N.P. via email.” State v. J.P., supra.

The only issue the court had to resolve, therefore, was J.P.’s “argument on appeal that his conduct was inadvertent and unintentional.” State v. J.P., supra. The Appellate Division explained that to “determine whether a defendant knowingly or purposely violated the terms of the TRO, a court must carefully consider the surrounding circumstances as presented in the record” of the evidence introduced at trial. State v. J.P., supra.

In this matter, Judge Palmer noted [J.P.] specifically addressed the email's subject line to N.P., which contradicted his assertion that the email was made for use during his next appointment with his attorney. Additionally, examining the language in the document's entries, the trial judge noted the `communication [is] to [N.P.],’ contained [J.P.’s] direct appeals to N.P. and his attempt `to explain his actions and good intentions[, which] were to make the marriage work.’

The court also found [J.P.] to be technologically savvy, and had extensive experience using his BlackBerry as a `communication device.’ Finally, the judge reasoned [J.P.’s] claim of preparation of confidential `journal entries’ was belied by the lack of care for maintaining the document's privacy.

We determine Judge Palmer sufficiently assessed the testimonial evidence in making his factual findings. The court's determination that defendant's conduct was a knowing violation of the TRO is adequately supported by substantial and credible evidence found in the record and will not be disturbed.

I assume the “oops! . . . I inadvertently sent” whatever in violation of the law defense has been raised in other cases, but this is the only reported decision in which I recall seeing it.

Posted by Susan Brenner at 2:58 PM