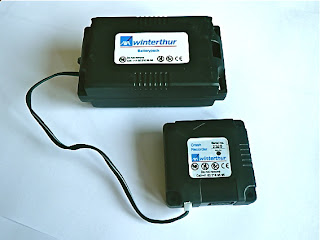 George Xinos was “convicted by a jury of vehicular manslaughter, failing to stop at scene of an accident resulting in the death or permanent, serious injury of another person, driving under the influence of alcohol and causing injury . . . and driving under the influence of alcohol with a blood alcohol level of at least 0.08 percent and causing injury”, all in violation of California law. People v. Xinos, 192 Cal.App.4th 637, --- Cal.Rptr.3d ----, 2011 WL 386864 (California Court of Appeals 2011).

He appealed, arguing that the trial judge erred in denying his motion to suppress evidence downloaded from “his vehicle's sensing and diagnostic module (SDM), also sometimes referred to as an event data recorder (EDR)”. People v. Xinos, supra.

To understand the charges, and the nature and import of the motion to suppress, it is necessary to review the facts that led to Xinos’ convictions:

Aaron Weiss was driving northbound on Almaden Expressway. . . . As Weiss approached the intersection at Camden, he saw the pedestrian's legs . . . lit up by the SUV's headlights and `then almost simultaneously thereafter [he saw] brake lights and then the collision.’ . . . Weiss saw the SUV stop north of the intersection. Weiss . . . pulled up behind the SUV. . . . [Xinos]. . . . drove away and Weiss followed. . . . Weiss . . . called 9-1-1 and gave the license plate number. . . .

Sometime after midnight on May 6, 2006, San Jose Officer Forrester responded to a citizen report that a suspicious vehicle was parked in front of the person's house. . . . When he arrived . . . he observed a vehicle with fresh body damage and blood . . . on it. The officer then began taking photos of the vehicle. . . . As he was doing so, the fog lamps flashed once, which indicated to him that `someone with a key fob set off the button.’ Forrester `began to walk door to door because [he knew] the remote normally only works within about 150 feet.’

Forrester made contact with [Xinos] in the doorway of a house on the same side of the street. [Xinos] said the vehicle belonged to him. . . . [He] was obviously intoxicated. . . . The officer arrested [Xinos], searched him incident to arrest, and recovered the key fob from a pocket. He filled out a tow sheet to have the vehicle, which was suspected to have been in a hit and run collision, moved . . . to the police warehouse. . . . Officer Almaraz arrived . . . and took [Xinos] into custody. . . .

Officer Checke, the lead investigator on the case, and her partner Officer Cassidy went to the intersection of Almaden Expressway and Camden Avenue in the early morning hours of May 6, 2006. After she learned that the driver and vehicle were nearby, she proceeded to that location and took photographs of the vehicle. She then returned to the scene of the collision. Officers Checke and Cassidy took photographs of the scene.

After investigating the case for several days, Officer Checke and another officer went to

the vehicle impound location and downloaded the data contained in the vehicle's SDM. They accomplished the download using a cable connected to the diagnostic link connector (DLC), which was located underneath the vehicle's dash area on the driver's side. An SDM receives data from various inputs related to the vehicle's restraint systems, seat belt pretensioners and airbags. The data includes information regarding engine speed, vehicle speed and deceleration, throttle percentage, braking, airbag deployment, and the restraint system. The officers did not expect any data from the collision to have registered because none of the airbags had deployed.

During subsequent training in November 2007, Officer Checke learned there could be data in the SDM even if the airbags did not deploy. Deceleration of the vehicle, for any reason, can cause the module to `wake up.’ The module does not date stamp the data. Every time the ignition is turned on, a cycle registers. The cycle corresponding to the collision needed to be identified.

Using software, Checke produced a crash data retrieval (CDR) report. It showed information captured during the five seconds before [Xinos’] vehicle experienced a change in velocity. It disclosed the vehicle's speed during the five seconds before the incident. The data indicated that there had been brake activation but the braking `could just be covering the pedal’ and was not necessarily hard braking.

Prior to trial, Xinos moved to suppress the information obtained from his vehicle, arguing that downloading the data “from his vehicle's sensing and diagnostic module (SDM) . . . violated his Fourth Amendment rights”. People v. Xinos, supra. The prosecution argued that “no search warrant was required because defendant had no reasonable expectation of privacy in the SDM's data, analogizing to electronic beepers and emphasizing the diminished expectation of privacy in vehicles.” People v. Xinos, supra. As I noted earlier, the trial judge denied his motion to suppress, and Xinos raised the issue again on appeal. People v. Xinos, supra.

Both parties essentially renewed those arguments on appeal:

[Xinos] argues that he had a reasonable expectation of privacy in the data contained in his vehicle's SDM and that downloading of the data . . . constituted a search unsupported by probable cause in violation of the Fourth Amendment. He asserts that neither the search incident to arrest exception nor the automobile exception to the warrant requirement applied. The Attorney General argues that [Xinos] had no reasonable expectation of privacy in the SDM's data and, in any case, police had probable cause to search the SDM.

Both parties agreed, on appeal and when Xinos moved to suppress at trial, that the vehicle “was lawfully in the police department’s possession when the officers downloaded the data from” its SDM. People v. Xinos, supra. This, of course, meant there was “no argument that the warrantless seizure” of the vehicle violated the 4th Amendment. People v. Xinos, supra. The only 4th Amendment issue, then, was whether downloading the data was an “unreasonable” search, i.e., a search that violated the 4th Amendment.

The Court of Appeals, then, had to determine if downloading the data was a search under the U.S. Supreme Court’s decision in Katz v. U.S. 389 U.S. 347 (1967). As I’ve noted before, in Katz the Court said we have a 4th Amendment reasonable expectation of privacy in a place or thing if (i) we subjectively believe it’s private and (ii) society agrees that our expectation is objectively reasonable.

On appeal, the prosecution argued that Xinos had “not demonstrated that he had a subjective expectation of privacy in the SDM's recorded data because he was driving on the public roadway and others could observe his vehicle's movements and speed.” People v. Xinos, supra. The Court of Appeals agreed that Xinos “could not have claimed any reasonable expectation of privacy with respect to governmental observations . . . of his driving on public roads.” People v. Xinos, supra.

The Court of Appeals then turned to another issue raised by the prosecution: the diminished 4th Amendment expectation of privacy we have in our vehicles. People v. Xinos, supra. In its opinion, the court traces the cases in which the U.S. Supreme Court has held that individuals have a

lesser expectation of privacy in a motor vehicle because its function is transportation and it seldom serves . . . as the repository of personal effects. A car has little capacity for escaping public scrutiny. It travels public thoroughfares where its occupants and its contents are in plain view. ‘What a person knowingly exposes to the public, even in his own home or office, is not a subject of Fourth Amendment protection.’

Cardwell v. Lewis, 417 U.S. 583 (1974) (quoting Katz v. U.S., supra). The court also noted, however, that comments the Supreme Court has made in several of its opinions at least indirectly “confirm[] that vehicles continue to be protected” by the 4th Amendment. People v. Xinos, supra.

The Court of Appeals then ruled in Xinos’ favor:

We do not accept the Attorney General's argument that [Xinos] had no reasonable expectation of privacy in the data contained in his vehicle's SDM. The precision data recorded by the SDM was generated by his own vehicle for its systems operations. While a person's driving on public roads is observable, that highly precise, digital data is not being exposed to public view or being conveyed to anyone else.

But we do not agree with [Xinos] that a manufacturer-installed SDM is a `closed container’ separate from the vehicle itself. It is clearly an internal component of the vehicle itself, which is protected by the Fourth Amendment. We conclude that a motorist's subjective and reasonable expectation of privacy with regard to her or his own vehicle encompasses the digital data held in the vehicle's SDM.

The court then found that the download of the data was not “supported by probable cause”, which is essential for a search to be constitutional under the vehicle exception to the 4th Amendment’s warrant requirement. People v. Xinos, supra. Since it also found that the use of the data as evidence at trial was not harmless error, i.e., could not conclusively be said not to have influenced the verdict, the Court of Appeals reversed the judgment in the case and remanded with directions to grant Xinos’ motion to suppress. People v. Xinos, supra.

you should update your post here to reflect the fact that the California Legislature changed the law several years ago to make it ILLEGAL for anyone to download the EDR without either the owners permission or a court order. Thus, this search would have been illegal anyways. See Calif. Vehicle Code § 9951 -- http://www.leginfo.ca.gov/cgi-bin/displaycode?section=veh&group=09001-10000&file=9950-9955

Thanks for pointing that out.

The reason I found this case interesting is because it applied the 4th Amendment to this information . . . and since the 4th Amendment applies in every state and to federal officers, that provides a more general level of protection.

So, did this guy get released?