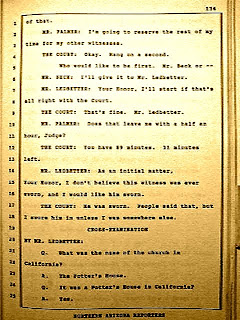 Those who testify in court essentially fall into two categories: expert witnesses and lay witnesses.

A lay witness, on the other hand, is someone “who does not testify as an expert” and is therefore restricted to testifying about information he/she obtained firsthand by, say, observing an accident or a crime. “Witness,” Black’s Law Dictionary (8th ed. 2004).

This post is about a defendant who claimed the prosecution should not have been allowed to present the testimony of a witness because he wasn’t an expert and didn’t have first-hand knowledge of the facts he testified about. The case is U.S. v. Wilson, 2009 WL 2390943 (U.S. District Court for the Eastern District of Louisiana 2009):

[Kern Carver Bernard] Wilson was convicted by a jury . . . of Counts 1 and 4 of the four-count indictment. . . . Count 1 charged Wilson with conspiracy to bribe a public official . . . by offering him money in return for confidential bid information concerning the Lake Cataouche Levee project . . . in violation of 18 U.S. Code § 201(b)(1)(B). Count 4 charged Wilson with a substantive count of bribery, namely his acceptance or agreement to accept a bribe in his capacity as a Corps of Engineers contractor and public official in return for disclosure of confidential bid information on the Project, in violation of 18 U.S. Code § 201(b)(2)(B).

U.S. v. Wilson, supra. After being convicted, Wilson filed a motion for a new trial arguing, in part, that the district court judge should not have allowed the testimony of the

Government's witness Sean Clayton regarding Wilson's alleged deletion of emails from his Corps account. Clayton testified, based on his review of records obtained from Wilson's Corps email account relevant to the period of the charged offenses, that Wilson had deleted most of his sent email for that period. Wilson contends Clayton's testimony was improper lay opinion testimony. Wilson notes that Clayton was not presented as an expert. . . . Wilson argues that Clayton's testimony as a lay opinion witness was based on circumstances beyond his personal knowledge: he did not personally observe Wilson's email account, but merely reviewed a record of that account prepared by some unknown third party. Wilson further argues that while Clayton testified that Wilson deleted emails from his account, Clayton did not address, nor could he have addressed, whether those allegedly purposefully deleted emails were erased from the Corps server through which Wilson's account was administered.

U.S. v. Wilson, supra. According to the federal judge who ruled on Wilson's motion, Clayton’s conclusion

was based on the fact that (A) Wilson's sent folder had zero sent emails for the relevant period but that (B) Wilson's in-box included reply emails to Wilson that had been sent in response to emails that Wilson originally sent during that same period. Thus, because Wilson's in-box contained reply emails sent in response to emails originated from his account during the relevant period, Clayton concluded that Wilson had deleted those original emails from his sent box.

Wilson claimed that the prosecution essentially, and improperly, presented Clayton as a de facto expert witness:

Wilson contends that Clayton's lay opinion that Wilson intentionally deleted incriminating emails was beyond the scope of his lay expertise. Wilson asserts that to the extent allegedly lay opinion testimony `results from a process of reasoning which can be mastered only by specialties in the field,’ that testimony must be analyzed under Rule 702 governing expert testimony. . . . Wilson argues that over forty-five email programs are in common use in the United States, and that the inner workings of those programs, especially in relation to whether the deletion of emails was intentional, is not a matter of everyday knowledge. Wilson argues that the Government improperly called Clayton in the guise of a lay witness to offer what was (or should have been) actual expert opinions, all in violation of Rules 701 and 702 of the Federal Rules of Evidence.

U.S. v. Wilson, supra. Rule 701 of the Federal Rules of Evidence deals with the situation in which a lay witness offers an opinion about something. It says that if a witness is not testifying as an expert,

the witness' testimony in the form of opinions or inferences is limited to those opinions or inferences which are (a) rationally based on the perception of the witness, (b) helpful to a clear understanding of the witness' testimony or the determination of a fact in issue, and (c) not based on scientific, technical, or other specialized knowledge within the scope of Rule 702 [of the Federal Rules of Evidence].

Rule 702 sets out the circumstances and conditions under which someone can offer an opinion as an expert witness:

If scientific, technical, or other specialized knowledge will assist the trier of fact to understand the evidence or to determine a fact in issue, a witness qualified as an expert by knowledge, skill, experience, training, or education, may testify thereto in the form of an opinion or otherwise, if (1) the testimony is based upon sufficient facts or data, (2) the testimony is the product of reliable principles and methods, and (3) the witness has applied the principles and methods reliably to the facts of the case.

Rule 702 of the Federal Rules of Evidence.

In ruling on Wilson’s argument, the judge quoted part of the trial transcript to rebut Wilson’s claim that the prosecution at least implicitly presented Clayton as an expert:

[The] Trial Transcript of Clayton's testimony . . . includes the following colloquy with counsel for the Government:

Q. Now, with respect to the review of these footprints and the e-mails, I don't want to give the jury the wrong impression, you're not a computer forensic examiner, are you?

Q. Did you use any forensic software to perform these analyses?

Q. What type of background do you have to be able to perform these types of analyses?

A. It would be a normal computer user of Microsoft Office products.

Q. You're not an expert?

U.S. v. Wilson, supra. He then noted that the “`distinction between lay and expert witness testimony is that lay testimony results from a process of reasoning familiar in everyday life, while expert testimony results from a process of reasoning which can be mastered only by specialists in the field.’” U.S. v. Wilson, supra (quoting U.S. v. Yanez Sosa, 513 F.3d 194, 200 (U.S. Court of Appeals for the Fifth Circuit 2008)).

Ultimately, the judge found that Clayton’s testimony was properly admitted as

lay opinion testimony. . . . Clayton admitted on redirect that he was not qualified to and had not performed any forensic investigation, nor utilized any software or other forensic tests in his review of Wilson's email account. Rather, Clayton simply observed that Wilson's `sent’ email folder had no contents dated from the period of the conspiracy; observed that Wilson's `inbox’ folder included reply messages to emails that Wilson had sent during the period of the conspiracy; and, as a result, rationally inferred that Wilson had deleted the sent emails from the `sent’ folder. This series of observations and inferences resulted `from a process of reasoning familiar in everyday life,’ and thus Clayton's testimony was properly admitted.

The "Reply-To:" header wasn't brought up by anyone?

"Reply-To:" is a well-known header on sent email, and curiously enough, directs replies to another address.

Assuming you objected prior to the testimony, it should not have been admitted. If he objected after, and raised reasonable argument, the jury should have been instructed to disregard the testimony.

It is simply not rational to infer that because the sent mail folder does not contain mail to which replies were received, that mail was deleted.

There are so many reasons why this might not be the case. The most obvious is that the mail was sent from someplace other than where it was received.

An email message is only placed in 'sent mail' at the point from which it is sent. But, generally, all email to the same address winds up at the same destination.

It is equally rational to infer that for that time period, he sent his outgoing email from someplace else. (This is more common than you might think, as some ISPs requires you to use their outbound email servers but you cannot use their email servers to collect inbound email not address to those servers.)

Now suppose that a lay witness "observes" child pornography on a defendant's work computer, and "observes" that the date stamps match the periods when the defendant was on the clock, and "rationally infers" that the defendant downloaded the images. Same everyday process of reasoning, no real technical knowledge required, but this seems like the kind of question that would demand more stringent proof.