The Judge, the Email and “Violating a Criminal Protection Order” 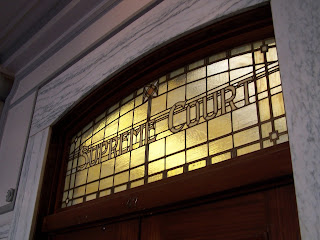 This post examines an opinion issued by the Presiding Disciplinary Judge of the Supreme Court of Colorado: People v. Lesuer, 2017 WL 3588713. The opinion begins by explaining that the

Presiding Disciplinary Judge approved the parties' conditional admission of misconduct and suspended James D. Lesuer (attorney registration number 18379) for six months, effective August 11, 2017.
In January 2014, a temporary protection order was entered against Lesuer, forbidding him to contact his ex-wife. In March 2014, Lesuer sent his ex-wife a text message. He was arrested, was convicted of a violation of the protection order, and received a deferred judgment. In November 2014, Lesuer contacted his ex-wife by email. He was again arrested and was convicted of violating a criminal protection order, a class-one misdemeanor. He was sentenced to sixty days in jail and two years of supervised probation. His deferred judgment was also revoked. Lesuer failed to report both of his convictions to disciplinary authorities.

People v. Lesuer, supra.
The opinion goes on to explain what happened next, i.e., that
[i]n October 2016, Lesuer violated a protection order by contacting his ex-wife via an online mail service. He was arrested, charged with violating a protective order, and released on bond. He then emailed his ex-wife again in November 2016. He was again arrested and charged. In April 2017, Lesuer pleaded guilty to violating a protective order in one case in exchange for the dismissal of the second case. He was sentenced in June 2017 to 120 days in jail. He was later placed on work release.

Posted by Susan Brenner at 6:03 PM