“Assault with a Deadly Weapon,” the Trial and the Juror’s Cell Phone Call 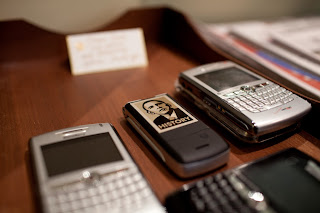 This post examines a recent decision from the California Court of Appeal – Second District: People v. Barner, 2017 WL 3668446. The court begins the opinion by explaining that
Defendant Ashley Craig Barner was convicted of assault with a deadly weapon. Subsequently, a person who identified himself as Juror No. 35 reported that another juror had used a cell phone during jury deliberations. Defendant petitioned for disclosure of Juror No. 35's identifying information. The court denied defendant's petition, finding that the petition was deficient as a matter of law because defendant had not made a prima facie showing of good cause to disclose the juror's identifying information.

On appeal, defendant claims that the court abused its discretion by denying him a hearing. We hold that the trial court did not abuse its discretion, because the allegation that a juror used a cell phone, standing alone, did not support a reasonable belief that jury misconduct occurred.
People v. Barner, supra.
The opinion goes on to explain how, and why, the prosecution arose:
On December 30, 2015, at around 9:50 p.m., defendant approached Merced Carlin, who was waiting for the bus at a bus stop. Defendant said, “I want my shit,” and pointed a sawed-off shotgun at Carlin. Carlin, who was afraid, ran to a liquor store across the street. Defendant chased after Carlin. Carlin entered the liquor store, and a few minutes later, defendant entered with the gun in his jacket. Defendant approached Carlin, but somebody in the store stopped and took defendant outside by force.

Carlin called 911 from the store while defendant was outside of the store. A few minutes later, police found and arrested defendant who was sitting on the porch of a house near the liquor store. Defendant had a gun. A police officer later observed defendant in a security video. Defendant's right arm was rigid and his jacket was protruding.
People v. Barner, supra.
The court then outlined the “procedural background” of the case, i.e., what had happened to initiate the prosecution and how it had proceeded. People v. Barner, supra. It explained that
Defendant was charged with attempted second degree robbery and assault with a firearm. The trial court admonished jurors to stay off the Internet. Jurors found defendant guilty of assault with a firearm, and not guilty of attempted second degree robbery.

Four days after the jury returned the verdict, a person called the court and reported that he saw another juror use a cell phone during the jury deliberations. The caller identified himself as Juror No. 35 and promised to write a letter to the court describing the cell phone use. The caller did not report that the juror had used the cell phone for any purpose related to the trial. The court never received the juror's promised letter. The court informed both parties that Juror No. 35 had reported the incident, but the juror had not followed up with any written documentation. Defendant then filed a petition to disclose Juror No. 35's identifying information.

The court denied defendant's petition because it failed to establish a prima facie showing of good cause for the release of the juror's identifying information. The court reasoned that `[t]he unsworn allegation that may have been made by one of the jurors does not establish a probability that the verdict was improperly influenced.’

The court sentenced defendant to prison for a total term of 39 years to life. This appeal followed.
People v. Barner, supra.
The Court of Appeal then began its analysis of the arguments Barner made in his appeal, explaining, initially, that
Defendant contends that the trial court abused its discretion by finding that he did not make a prima facie showing of good cause for release of Juror No. 35's identifying information. According to defendant, he showed good cause because Juror No. 35's account suggested that Juror No. 35 could produce evidence of juror misconduct. As we shall explain, we disagree.

Under Code of Civil Procedure section 237, all personal identifying information (names, addresses, and telephone numbers) of jurors sitting on criminal cases shall be sealed upon the recording of a jury's verdict. (§ 237, subd. (a)(2).) A person wishing access to that information may petition the court for release of the information, and must support that petition by a declaration that includes facts sufficient to establish good cause for the release. (Id., subd. (b).) `The court shall set the matter for hearing if the petition and supporting declaration establish a prima facie showing of good cause for the release of the personal juror identifying information, but shall not set the matter for hearing if there is a showing on the record of facts that establish a compelling interest against disclosure.’ (Ibid.)

The trial court's determination of whether to hold a hearing on a petition to disclose juror identifying information is reviewed under an abuse of discretion standard. (People v. Cook(2015) 236 Cal.App.4th 341, 346; People v. Santos (2007) 147 Cal.App.4th 965, 978.) The trial court is not required to hold a hearing if the facts presented by petitioner are not sufficient to establish a prima facie showing of good cause for release of the information. (§ 237, subd. (b).) `”Good cause, in the context of a petition for disclosure to support a motion for a new trial based on juror misconduct, requires ;a sufficient showing to support a reasonable belief that jury misconduct occurred. . . .’” (People v. Johnson (2015) 242 Cal.App.4th 1155, 1161-1162; see People v. Cook, supra, at p. 345.) `Absent a showing of good cause for the release of the information, the public interest in the integrity of the jury system and the jurors' right to privacy outweighs the defendant's interest in disclosure.’ (People v. McNally (2015) 236 Cal.App.4th 1419, 1430.) Therefore, in order to be entitled to evidentiary hearing, defendant must show specific facts, which, if established, support a reasonable belief that jury misconduct occurred. Jury misconduct occurs when a juror receives evidence outside of court. (Pen. Code, § 1181, subd. (2).)
People v. Barner, supra. I apologize for not including hyperlinks with the citations to the statutes above, but for some reason I cannot find these statutes online. Since Texas Penal Code § 1181(2) plays a significant role in the resolution of this case, I am pasting its provisions in here:
When a verdict has been rendered or a finding made against the defendant, the court may, upon his application, grant a new trial, in the following cases only:

1. When the trial has been had in his absence except in cases where the trial may lawfully proceed in his absence;
2. When the jury has received any evidence out of court, other than that resulting from a view of the premises, or of personal property;
3. When the jury has separated without leave of the court after retiring to deliberate upon their verdict, or been guilty of any misconduct by which a fair and due consideration of the case has been prevented;
4. When the verdict has been decided by lot, or by any means other than a fair expression of opinion on the part of all the jurors;
5. When the court has misdirected the jury in a matter of law, or has erred in the decision of any question of law arising during the course of the trial, and when the district attorney or other counsel prosecuting the case has been guilty of prejudicial misconduct during the trial thereof before a jury;
6. When the verdict or finding is contrary to law or evidence, but if the evidence shows the defendant to be not guilty of the degree of the crime of which he was convicted, but guilty of a lesser degree thereof, or of a lesser crime included therein, the court may modify the verdict, finding or judgment accordingly without granting or ordering a new trial, and this power shall extend to any court to which the cause may be appealed;
7. When the verdict or finding is contrary to law or evidence, but in any case wherein authority is vested by statute in the trial court or jury to recommend or determine as a part of its verdict or finding the punishment to be imposed, the court may modify such verdict or finding by imposing the lesser punishment without granting or ordering a new trial, and this power shall extend to any court to which the case may be appealed;
8. When new evidence is discovered material to the defendant, and which he could not, with reasonable diligence, have discovered and produced at the trial. When a motion for a new trial is made upon the ground of newly discovered evidence, the defendant must produce at the hearing, in support thereof, the affidavits of the witnesses by whom such evidence is expected to be given, and if time is required by the defendant to procure such affidavits, the court may postpone the hearing of the motion for such length of time as, under all circumstances of the case, may seem reasonable.
9. When the right to a phonographic report has not been waived, and when it is not possible to have a phonographic report of the trial transcribed by a stenographic reporter as provided by law or by rule because of the death or disability of a reporter who participated as a stenographic reporter at the trial or because of the loss or destruction, in whole or in substantial part, of the notes of such reporter, the trial court or a judge, thereof, or the reviewing court shall have power to set aside and vacate the judgment, order or decree from which an appeal has been taken or is to be taken and to order a new trial of the action or proceeding.
People v. Barner, supra.
Getting back to the opinion, the court goes on to explain that
[t]urning to this case, there was no abuse of discretion in the court's summary denial of defendant's petition. The allegation that another juror used her cell phone, even if established, does not reasonably support the conclusion that a jury improperly considered outside information about the case.  Although Juror No. 35 reported that another juror `used’ her cell phone, Juror No. 35 did not report that the other juror used the Internet, discussed any subject connected with the trial over the phone, used the dictionary, or received any outside information. There was no evidence the juror used the phone in any manner connected with defendant's criminal proceeding. Therefore, there was no basis to conclude that the juror used her cell phone for an improper purpose. Juror No. 35's report did not suggest misconduct occurred or even may have occurred and defendant's petition was basically a fishing expedition in search of misconduct. In short, defendant failed to satisfy defendant's burden to establish a prima facie showing of good cause to disclose juror information. (See, e.g., People v. Jefflo (1998) 63 Cal.App.4th 1314, 1318-1319 [no good cause for identifying information when defendant's girlfriend reported that she spoke to a juror and defendant wanted to investigate whether the juror spoke to nonjurors about case]; see also People v. Cook, supra, 236 Cal.App.4th at p. 346 [`Good cause does not exist where the allegations of jury misconduct are speculative, conclusory, vague, or unsupported.’].)