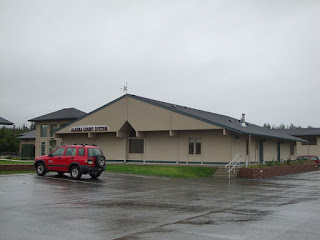 This post examines an opinion from the Court of Appeals of Alaska, which may be the first post I have done on an opinion from this court.  Bell v. State, 2017 WL 127985 (2017).
The Court of Appeals begins the opinion by explaining that
[i]n May 2012, several Apple iMac computers were stolen from West Anchorage High School by persons unknown. Shortly after these computers were stolen, Robert Daniel Bell sold one of them to a used electronics dealer. The dealer paid Bell $140 for the computer.

After hearing all of the evidence, the jury convicted Bell as charged.
Bell v. State, supra.
The Court of Appeals then took up the arguments Bell made on appeal, starting with the valuation of the stolen iMacs:
Alaska Statute 11.46.980(a) sets forth the circumstance under which the normal method for valuation of property, fair market value, can be supplanted by an alternative method of valuation, replacement value:

Bell's jury was instructed according to this statute. On appeal, Bell argues that the trial judge committed error by instructing the jury about the possibility of valuing the stolen iMac by its replacement value, contending that no reasonable juror could have resorted to replacement valuation. Secondly, Bell argues that because the school district computer was clearly worth less than $500, the judge should have entered a judgment of acquittal on the offense of felony theft by receiving stolen property.

Lastly, Bell argues that the trial judge should have granted him a judgment of acquittal on the offense of theft by deception because no reasonable juror could have believed that the used electronics dealer was deceived when Bell claimed that he was the legitimate owner of the iMac.

For the reasons that follow, we find Bell's arguments to be without merit and we affirm his convictions.
Bell v. State, supra.  I usually do not comment on arguments made in the cases I use as the basis of blog posts, but as far as I can tell,  Bell’s last argument about the “reasonable juror” is, at the least, unusual.
The court then went through his arguments, beginning with “the record pertaining to the value of the stolen computer”.  Bell v. State, supra.  It explained that
[d]uring Bell's trial, the comptroller for the Anchorage School District testified that the school district had purchased the iMac as part of a bulk purchase of almost 1500 Apple computers Apple computers in July 2010. The school district paid a discounted price of $889.24 for the computer. At the time it was stolen, the iMac had been used in the Anchorage schools for two academic years.

Anchorage Police Detective Steven Oyler corroborated the network specialist's testimony. Oyler testified that, in his experience, Apple computers are `a higher-dollar brand’ and that new iMacs sell for about $1500.

During final argument, the prosecutor argued that the iMac had an ascertainable fair market value and that, based on the sale prices of like-model new iMacs, it was reasonable to infer that this market value equaled or exceeded $500. Bell's defense attorney agreed that the iMac had an ascertainable market value and he therefore urged the jurors to ignore the `replacement value’ method of valuing the computer. The defense attorney argued that there was at least a reasonable possibility that the iMac was worth something less than $500.
Bell v. State, supra.
The Court of Appeals went on to articulate its analysis of, and ruling on, Bell’s first argument:
Bell argues that the trial judge should have granted him a judgment of acquittal on the second-degree theft offense because no reasonable juror could have concluded that the value of the iMac was $500 or more. When a defendant challenges the sufficiency of the evidence to support a criminal conviction, an appellate court must view the evidence, and all reasonable inferences to be drawn from the evidence, in the light most favorable to upholding the jury's verdict.  The question is whether, viewing the evidence in this light, a reasonable juror could have concluded that the State had proved its case beyond a reasonable doubt.

We have already described the evidence presented at Bell's trial pertaining to the value of the iMac. Viewing that evidence in the light most favorable to the jury's verdict, we conclude that it was sufficient to convince fair-minded jurors that the iMac was worth at least $500.
Bell v. State, supra.
The Court of Appeals went on to address Bell’s next argument, which was that
the trial judge should never have informed the jury that, under Alaska law, the value of property is its replacement value if it is not reasonably possible to ascertain a fair market value for the property.

More specifically, Bell argues that the iMac was self-evidently marketable because Bell indeed sold it to the used electronics dealer. Thus, Bell contends, no reasonable juror could have concluded that it was not reasonably possible to ascertain a fair market value for the computer. But the jury was not required to find that, simply because Bell was able to sell the iMac to the used electronics dealer, the computer had a fair market value.

`Fair market value’ is a term of art. As we explained in Morris v. State, the phrases `market value’ or `fair market value’ mean `the amount at which the property would change hands, between a willing buyer and a willing seller, neither being under compulsion to buy or sell and both having knowledge of the relevant facts.’

The sale between Bell and the used electronics dealer did not necessarily establish a fair market value under this definition. The used electronics dealer testified that he bought the iMac under the impression that it was an older but functional computer. It was not until later that he became aware of the significant limitations on its functionality. And even when the dealer thought that the iMac was functional, he was only willing to pay a very small price for it — $140.

When this issue was presented to the trial judge (as part of Bell's motion for judgment of acquittal following the State's case-in-chief), the judge himself declared that he thought it was `next to impossible’ to ascertain a fair market value for the computer — although he acknowledged that the jurors might see it differently, and so he allowed the attorneys to argue their respective positions regarding the market value of the computer.

We agree with the trial judge that reasonable people could conclude that it was not reasonably possible to ascertain a fair market value for the iMac, given the significant limitations on its functionality. It was therefore proper for the trial judge to instruct the jurors that, if the market value of the iMac could not reasonably be ascertained, the jurors should use replacement cost as the measure of the computer's value.

On a related issue, we reject Bell's argument that it is always a question of law — to be decided by the trial judge, not the jury — whether the fair market value of particular property is reasonably ascertainable. There may be cases where, based on the evidence, reasonable people would have to agree that the property at issue had a reasonably ascertainable fair market value. But in cases like Bell's, some reasonable jurors might conclude that it was not reasonably possible to ascertain a fair market value for the hobbled iMac. In such circumstances, a judge is not entitled to take this issue from the jury.
Bell v. State, supra.  The comments quoted in the excerpt above, with regard to the “relevant facts” are quoted from Johnson v. State, 188 P.3d 700, 702 (Alaska Court of Appeals 2008)).
The Court of Appeals went on to address Bell’s argument that the evidence presented at trial was not sufficient to prove beyond a reasonable doubt that he was guilty of theft by deception:
Bell claims the judge erred by denying Bell's request for a judgment of acquittal on the theft by deception charge. Bell argues the dealer must have known that the iMac was stolen and that Bell had no right to sell it. Consequently, Bell contends there was no reasonable possibility that the used electronics dealer was deceived. But Bell's argument rests on viewing the facts in the light most favorable to himself rather than in the light most favorable to upholding the jury's verdict.

Subsections (D) and (E) of [AlaskaStatutes] 11.81.900(b)(18), respectively, define `deception’ as the `fail[ure] to disclose a . . . legal impediment to the enjoyment of the property’ or the `promise [of] performance that the defendant does not intend to perform or knows will not be performed.’ Because reasonable jurors could conclude that Bell deceived the used electronics dealer under either of these definitions, the trial judge properly denied Bell's motion for acquittal.

The used electronics dealer testified that he required all customers to sign a document promising to indemnify the dealer for any latent defects discovered in the purchased item. Bell signed this indemnification contract using a false name. Based on this testimony, reasonable jurors could find that Bell's promise to indemnify the dealer for defects, made under a false name, constituted a promise of performance that Bell did not intend to perform — and that Bell thereby committed deception as defined in subsection (E) of the statute.

In addition, sufficient evidence was presented for the jury to find Bell guilty of deception under subsection (D) as well. The dealer testified that his business model was to purchase used electronics from people whose circumstances compelled them to sell at a deep discount. He admitted that he was aware of the risk that sometimes he would be purchasing stolen property. But he testified that he did not knowingly make purchases of stolen goods and that he specifically would not have purchased the iMac from Bell if Bell had revealed that it was stolen.
Bell v. State, supra.
The Court of Appeals therefore held that
[b]ased on this testimony, a reasonable juror could conclude that Bell deceived the used electronics dealer by failing to disclose that the iMac was subject to a legal impediment, i.e., that it was stolen.

Accordingly, the trial judge properly denied Bell's motion for a judgment of acquittal on the theft by deception offense.
Bell v. State, supra.