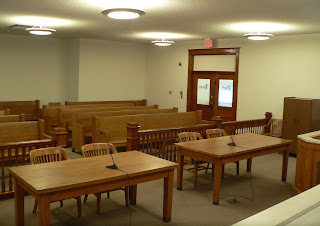 This post examines an opinion from the Missouri Court of Appeals:  State v. Smith, 2016 WL 6956763 (2016). The court begins by explaining how the prosecution arose:
In October 2011, property was stolen from a Jackson County law firm, which included, among other things, one HP mini laptop computer. Following a lead, police sought and executed a search warrant at the home of Ezra J. Smith. There, police discovered the missing laptop, which was identified by its serial number. Additional investigation confirmed that the laptop still displayed the previous owner's name on the welcome screen and had been used to access Smith's email account. During Smith's trial, the IT manager for the law firm provided testimony that confirmed the laptop found at Smith's home was the same laptop stolen from the law firm. On the issue of the value of the laptop, the IT manager provided the following testimony:

Following this exchange, the Prosecutor sought to refresh the memory of the IT manger using the police report relating to the theft, which the trial court permitted over the defense's objection. Testimony as to the value then continued:

Q: What did you indicate to the officer regarding the approximate value of that laptop?
A: I indicated $550 and that amount would have come from the invoice.

This was the only evidence offered at trial relevant to the value of the laptop. At the close of the prosecution's evidence, Smith moved for a judgment of acquittal arguing the State had failed to produce sufficient evidence to meet its burden. The motion was overruled and the jury found Smith guilty of the class C felony of receiving stolen property. Smith timely appealed.
State v. Smith, supra.
The Court of Appeals goes on to explain that
[i]n his sole point on appeal, Smith contends that the trial court erred in denying his motion for acquittal arguing there was insufficient evidence presented that the stolen laptop was worth more than $500 at the time of the crime. When `reviewing a claim that there was not sufficient evidence to sustain a criminal conviction, [the reviewing court] does not weigh the evidence but, rather, “accepts as true all evidence tending to prove guilt together with all reasonable inferences that support the verdict, and ignores all contrary evidence and inferences.”’ State v. Claycomb, 470 S.W.3d 358, 362 (Missouri Supreme Court en banc 2015) (quoting State v. Latall, 271 S.W.3d 561, 566 (Missouri Supreme Court en banc 2008)). The reviewing court's only duty is to ask `whether there was sufficient evidence from which the trier of fact reasonably could have found the defendant guilty.’ Id. (quoting State v. Latall, 271 S.W.3d at 566).
State v. Smith, supra.
The court then outlined the provisions of the statutes at issue in the case:
Section 570.080 sets forth the elements for the offense of receiving stolen property. The offense is a class A misdemeanor unless one of the factors found in section 570.080.4 is proven by the State which will enhance the offense to a class C felony. Relevant to this case, enhancement to a class C felony is available if `[t]he value of the property or services appropriated is five hundred dollars or more but less than twenty-five thousand dollars.’ Section 570.080.4(1).

Section 570.020 defines the term `value,’ as used in section 570.080, to mean `the market value of the property at the time and place of the crime, or if such cannot be satisfactorily ascertained, the cost of replacement of the property within a reasonable time after the crime.’ (emphasis added). Section 570.020 further states that if `the value of property cannot be satisfactorily ascertained pursuant to the standards set forth in . . . this section, its value shall be deemed to be an amount less than five hundred dollars.’
State v. Smith, supra (emphasis in the original).
The Court of Appeals then began its analysis of the issue in the case, explaining that
[a]s an initial matter, we note that the IT manager's testimony regarding the value of the laptop being between $300 and $450 at the time of purchase, which was given prior to her memory being refreshed, is not relevant to our review. A reviewing court does not undertake to weigh the evidence because `the fact-finder may believe all, some, or none of the testimony of a witness’. State v. Hutson, 487 S.W.3d 100, 109 (Mo. App. W.D. 2016).

Consequently, the fact-finder in this case was free to believe only the testimony that the purchase price of the laptop, as listed on the invoice, was $550. As this is the only remaining evidence regarding the value of the property, this is the only evidence that we will consider in our review. Even setting aside the conflicting testimony however, we find the evidence presented legally insufficient to support the felony conviction.

Missouri courts have held that testimony as `to the property's purchase price, the amount of time between the property's purchase and its theft, and its condition when stolen’ is sufficient evidence to establish value. State v. Petalino, 890 S.W.2d 679, 683 (Mo. App. W.D. 1994). In the case of State v. Hall, the defendant challenged his conviction of receiving stolen property of a laptop on the grounds that the prosecution failed to prove the value was more than $150.  State v. Hall, 56 S.W.3d 475, 478 (Mo. App. W.D. 2001). At trial, evidence was presented that the laptop was purchased for $3,100 in July of 1997 and that $900 in additional programing had been added before it was stolen by an unknown person and eventually pawned by the defendant in February of 1999. The court concluded `for the jury to find that it had a value of at least $150 at the time it was pawned, it would only have had to infer that it was worth at least 3.75 percent of its purchase price of approximately [nineteen] months earlier.’ Id. at 479.

The Court further determined that `[t]his was a reasonable inference for the jury to draw such that the evidence was sufficient to establish that the laptop had a value of at least $150 at the time the appellant pawned it.’ Id. This is significantly different from our case where the purchase price of the laptop and the threshold for enhancement are much closer. Applying the same standard from Hall to the present case, the jury would have had to find that the laptop retained nearly 91 percent of its value from the time of purchase to the time of theft. While such a conclusion is not impossible in the abstract, here it is made impossible due to the simple fact that no evidence showing the time between the purchase and theft was introduced. Because of this, there was simply no way to determine, based on the purchase price alone, what the value of the laptop was at the time of the crime.
State v. Smith, supra (emphasis in the original).
The opinion goes on to explain that
[t]he lack of evidence regarding the value at the time the crime occurred is fatal to the felony conviction, as exemplified in the case of State v. Boyd. In Boyd, the defendant was also seeking to overturn a conviction for felony receiving stolen property. State v. Boyd, 91 S.W.3d 727, 729 (Mo. App. S.D. 2002). The property in question was a 1999 Honda Rebel 250 Motorcycle purchased for $3,500 and stolen from the scene of an accident in which the motorcycle had been involved. Id. at 729–30. At trial, the motorcycle owner testified that she had bought it `in 1999 for $3,500, that it was in nearly ‘perfect’ condition when her son last drove the motorcycle prior to the accident in August 2000, and that her son said it had not been damaged ‘very much’ in the accident.’ Id. at 733. The court found that the testimony was `too indefinite to constitute substantial evidence from which a jury could reasonably decide, beyond a reasonable doubt, that the market value of the motorcycle at the time and place of the crime’ met the statutory amount for felony enhancement. Id. at 734. In the case before us, there was no evidence presented regarding either the condition of the laptop when it was stolen or the time between its purchase and its theft. If the testimony in Boyd was too indefinite, then the even more limited testimony now presented is unquestionably insufficient.

Some recent Missouri cases have called into question the “purchase-price-plus-age” test employed in Hall and Boyd. See State v. Brown, 457 S.W.3d 772, 784 (Mo. App. E.D. 2014); State v. Johnson, 461 S.W.3d 842, 844 (Mo. App. E.D. 2015). In Brown for instance, the court determined that the passage of section 570.020, which went into effect in 1979, was meant to abrogate the purchase-price-plus-age test. Brown, 457 S.W.3d at 785. After dispensing with the test, the court found testimony that a television was purchased for $749.99 three years prior to being stolen to be insufficient, on its own, to establish that, at the time the crime was committed, it was worth $500 or more. Id. Application of the approach employed in Brown to the facts before us clearly produces the same result. If evidence that the property in question was bought for nearly $750 three years earlier is insufficient, then evidence that property purchased for $550 at some unknown prior point in time must also be insufficient.
State v. Smith, supra.
The court then goes on to examine alternative tests for determining the value of property “at the time of the theft:
For instance, Missouri courts have long held that `an owner's opinion can be substantial evidence of an item's worth.’ State v. Reilly, 674 S.W.2d 530, 533 (Mo. banc 1984). The same courts have also held that an `owner of stolen property need not be experienced in valuating such property in order to express an opinion.’ Id. In State v. Slocum, the testimony by the owner of a handcrafted mandolin that the instrument may have been worth as much as $6,000 was sufficient to sustain a conviction. State v. Slocum, 420 S.W.3d 685, 687–88 (Mo. App. E.D. 2014). In this case, however, the IT manager did not give her opinion regarding how much the laptop was worth but merely testified to the price on the invoice. Thus, no opinion testimony was presented with regard to the value of the laptop at the time it was stolen.

In State v. Johnson, the court upheld a conviction for stealing items with an aggregate value over $500 based on the jury's `reasonable inference from their common sense and life experiences.’ State v. Johnson, 461 S.W.3d 842, 845 (Mo. App. E.D. 2015). The items in question were an Apple laptop computer purchased three years prior for $2,700, a Dell laptop computer purchased four months before for $700, jewelry that the victim testified was worth less than $200, an iPad tablet, and an iPhone. Id. The court concluded that `there were so many items, including a brand-new computer and three Apple-brand electronics, the high cost of which is common knowledge, the aggregate value was obviously in excess of $500.’ Id. However, the court also warned that `[w]ere this a close case involving only one of these items . . . [then] the State would have needed to produce more evidence than it did to overcome reasonable doubt.’ Id. The case before us is that hypothetical `close case’ warned of by the court in Johnson, and we agree with the Johnson court's assessment that the State was required to produce more evidence than it did to meet its burden.
State v. Smith, supra.
The Court of Appeals went on to announce its ruling in the case, explaining that
[u]nder section 570.020, when the value of the property cannot be satisfactorily ascertained, it will be deemed to be less than $500. Because we find that there was insufficient evidence presented regarding the value of the laptop at the time of the crime, it is deemed less than $500. Therefore, the State has failed to meet its burden to prove every element necessary for a felony conviction. State v. Boyd, 91 S.W.3d 727, 734 (Mo. App. S.D. 2002). As a result, Smith's conviction for felony receiving stolen property must be, and is, reversed.