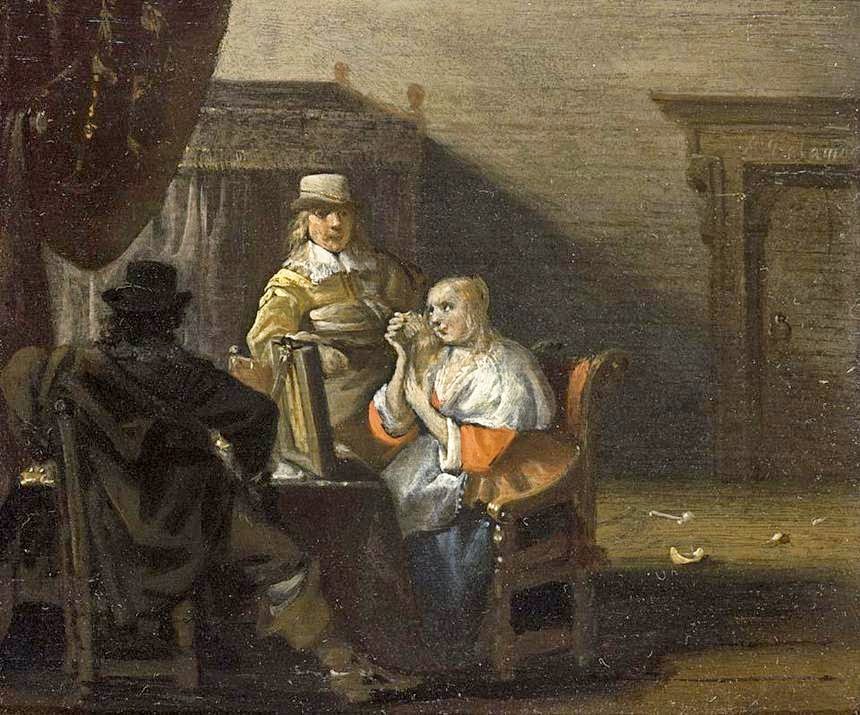 After a jury convicted Charles Adams “of capturing a representation that depicts nudity without the knowledge or consent of the person who is depicted nude in violation of Wisconsin Statutes § 942.09(am)1,” he appealed.  State v. Adams, 2015 WL 1034741 (Wisconsin Court of Appeals 2005).
More precisely, Adams was convicted of “videotaping his sexual activity with a prostitute.”  State v. Adams, supra.
The Court of Appeals begins its opinion by explaining how, and why, Adams came to be charged with this offense:
Adams relies on the facts set forth in the amended criminal complaint. Police executed a search warrant of Adams's truck and found numerous electronic video recordings of Adams engaging in sexual activity with various women. In the video that is the subject of Adams's conviction, police recognized the location as a hotel at which Adams had stayed between October 26, 2010, and November 25, 2010.

Police had a tip regarding the identity of the woman in the video, and when police met with her she identified Adams as a man who had hired her for sexual activity in November 2010 at that same hotel. The video shows the woman nude and involved in sexual activity with Adams.

It appears that the activity was captured via a laptop computer that was on a desk or dresser. The woman did not consent to the recording.
State v. Adams, supra.
The Court of Appeals began its analysis of Adams’ arguments on appeal by noting that
Wisconsin Statutes§ 942.09(2)(am)1 prohibits anyone from (1) video recording a person in the nude, (2) without that person's knowledge or consent, (3) in circumstances where the nude person has a reasonable expectation of privacy, and (4) when `the defendant knew or had reason to know that the nude person did not know of and did not consent to the recording.’ State v. Jahnke, 2009 WI App 4 316 Wis.2d 324, 762 N.W.2d 696 (Wisconsin Court of Appeals 2008). Application of a statute to undisputed facts is a question of law we review without deference to the circuit court. State v. Jahnke, supra.

Additionally, statutory interpretation presents a question of law we review de novo. See State v. Nelson, 2006 WI App 124, ¶ 18, 294 Wis.2d 578, 718 N.W.2d 168 (Wisconsin Court of Appeals 2006).
State v. Adams, supra.
The first argument Adams made in his appeal was that “the woman did not have a reasonable expectation of privacy while nude in the hotel room with him because she was a prostitute and Adams was paying her to engage in sexual activity.” State v. Adams, supra. Unfortunately for him the Court of Appeals did not buy his argument:
Permission to be viewed in the nude does not mean permission to be recorded in the nude, see State v. Jahnke, supra, and permission to engage in sexual acts with someone does not mean permission to record that person in the nude.

`By placing limits on the ability of others to record, the statute protects a person's interest in limiting, as to time, place, and persons, the viewing of his or her nude body. It follows that the pertinent privacy element question is whether the person depicted nude had a reasonable expectation, under the circumstances, that he or she would not be recorded in the nude.

State v. Jahnke, supra. That Adams and the woman were engaged in the crime of prostitution does not mean that the woman relinquished her reasonable expectation of privacy under Wisconsin Statutes § 942.09(2)(am)1.
State v. Adams, supra.  In a footnote, the Court of Appeals pointed out that
[a]lthough a person who engages in commercial sexual activity has no constitutional right to privacy to shield their activities from government intrusion, City of Madison v. Schultz, 98 Wis.2d 188, 295 N.W.2d 798 (Wisconsin Court of Appeals 1980), the statute does not incorporate the constitutional right to privacy, but rather a right to privacy as commonly understood by its terms, State v. Nelson, 2006 WI App 124, 54, 294 Wis.2d 578, 718 N.W.2d 168 (Wisconsin Court of Appeals 2006).

We need not balance the government's interest in law enforcement against a person's right to privacy because it is not the government that is invading that right. State v. Nelson, supra.
State v. Adams, supra.
In other words, the Court of Appeals is explaining that there is a difference between the 4th Amendment right to privacy, which protects citizens’ privacy from unjustified intrusions by law enforcement or other government agents, and the common law or statutory right to privacy that arises under state statutes and that protects citizens’ privacy from invasion by other citizens.  For more on that, check out Wikipedia’s entry on privacy law in the United States.
Next, Adams argued that
he was justified in videotaping the woman without her consent because she was a prostitute and might, during their illegal sexual encounter, overdose on illegal drugs or accuse him of battery. Adams contends he needed the videotape to defend himself against a potential false accusation of abuse or an appearance of involvement in a drug overdose.

But the court quickly added that `the legislature has already made the judgment that, in the circumstances described in the statute, the offender does not have a legitimate interest in capturing representations depicting nudity.’ State v. Nelson, supra.

Nelson did not add a `legitimate reason’ exception to the reasonable expectation of privacy prong of the statute. And Adams's reasons do not provide factual or legal support for any such defense. It is no defense to prosecution for a crime that the victim was also guilty of a crime. Wisconsin Statutes § 939.14.

Recording someone nude in violation of § 942.09(2)(am)1 in order to protect against possible adverse scenarios is not a legitimate reason or defense. Furthermore, there is no evidence that Adams made the recording for the purpose of self-protection.
State v. Adams, supra.
Finally, the Court of Appeals “briefly address[ed]” Adams’
half-hearted argument that the woman consented or relinquished her expectation of privacy because the laptop computer that was recording her was in view. Adams raises this issue for the first time in his reply brief. See Schaeffer v. State Pers. Commission, 150 Wis.2d 132, 441 N.W.2d 292 (Wisconsin Court of Appeals 1989) (argument raised for first time in reply brief generally not considered).

Furthermore, the jury found that there was no knowledge or consent, and Adams does not challenge that finding or raise any sufficiency of the evidence argument.
State v. Adams, supra.
You can, if you are interested, read more about the case, and see a photo of Adams, in the news story you can find here. You can also read more about the case in the story you can find here.

Posted by Susan Brenner at 5:15 AM