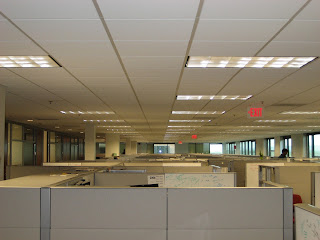 The facts and charges in th  cases seem to be pretty much identical, but this post only examines the one against Jaga Cisse.  The charges and the issues on appeal in the cases but the Court of Appeals ultimately affirmed both their convictions.

The cases involved J.P. Morgan Chase (JPMC), which operates a

major enterprise in central Ohio with offices throughout the region and thousands of employees engaged in myriad activities involving banking, loans, and mortgages. JPMC has an online application process by which applicants submit an initial application online for a recruiter to review. If the applicant meets the initial criteria for a position, the recruiter schedules an interview between the applicant and a JPMC manager. The interview takes place at the office location where the manager is based.

If the applicant's interview is successful, the recruiter contacts the applicant again to schedule a background check which includes fingerprinting, photographing, and a drug test. This . . . occurs at yet a different location. . . .

“`Ndiaga’” told Hall to call him “`Jack’” and said he “was working on a bachelor's degree in accounting and hoped the temporary position might lead to a permanent” one with JPMC. State v. Cisse (1), supra. Since “`Jack’” was “very friendly and outgoing”, Hall recommended he be hired and “told the recruiter to contact `Jack’ regarding the background check process.” State v. Cisse (1), supra.

Richardson testified at trial that she was “not impressed” with “`Jaga’s’” performance.
State v. Cisse (1), supra.  She

always referred to `Jaga’ as `Jaga’ but she heard other employees call him `Jack.’ She testified she was not impressed with his performance as an employee and
his slowness affected the competitiveness of her unit; consequently, she visited `Jaga's’ cubicle frequently to make sure he stayed on task.

One day Richardson came into his cubicle and noticed `Jaga's’ JPMC ID badge lying in plain sight; she was surprised to notice the photo was not of the man she knew as `Jaga.’ She said, `That's not you,’ and `Jaga’ replied, `Yes it is; I lost weight.’ `Jaga’ tried to snatch the badge from Richardson.

Richardson left `Jaga's’ cubicle and reported the matter to her immediate supervisor, who had access to the JPMC employee Passport system containing employee photos. Together they pulled up the photo of `Jaga,’ and it was not the man working for Richardson as `Jaga Cisse.’ Richardson looked on Facebook and discovered the man she knew as `Jaga’ was in fact Dame Cisse, and that Jaga Cisse was Dame's brother.

investigation. O'Reilly was aware of Richardson's Facebook research and discovered through a LexisNexis search that Dame and Jaga lived at the same address. . . . He found a blog written by `Ndiaga Cisse’ containing a photo that matched the photo on the JPMC employee ID badge. He reviewed forensic imaging of `Jaga's’ JPMC computer that revealed emails from the address papadame2000@gmail.com.

Jaga made several arguments on appeal, only two of which are examined here.  He argued that “the trial court should have excluded the copies of Facebook pages taken from the web offered as exhibits by” the prosecution.  State v. Cisse (1), supra. He seems to have argued that the copies involved inadmissible hearsay.

The Court of Appeals rejected the argument, rather cursorily, noting that the jury was

free to look at the photos from the Facebook pages and determine their weight. The Facebook photos were only relevant to the investigation and how first Richardson and then investigators determined who `Jaga Cisse’ really was. In light of Dame's subsequent admissions, the admission of this evidence was harmless.

Jaga’s other argument on appeal was that the conviction was “against the manifest weight of the evidence”, i.e., that it did not prove he was guilty.  State v. Cisse (1), supra.

The Court of Appeals explained that when a defendant brings such an argument, it

functions as the `thirteenth juror,’ and after `reviewing the entire record, weighs the evidence and all reasonable inferences, considers the credibility of witnesses and determines whether in resolving conflicts in the evidence, the jury clearly lost its way and created such a manifest miscarriage of justice that the conviction must be overturned and a new trial ordered.’ State v. Thompkins, 78 Ohio St.3d 380 (Ohio Supreme Court 1997).

Dame testified at trial, and “insisted Jaga knew nothing about the identity fraud scheme” and said “he signed the paychecks over to himself trying to make two signatures look different.”  State v. Cisse (1), supra.  Dame also testified that he used Jaga’s identity

to gain employment with JPMC. Dame testified that he was offered a job at JPMC which was later withdrawn; he applied again under the name `Ndiaga Cisse,’ using his brother's information. He did not tell Jaga he was doing this or ask his permission.

Dame was unaware Jaga had changed his name when he became a citizen, from Ndiaga, hence the discrepancy. Dame submitted the online application using Jaga's name, date of birth, Social Security number, and pertinent information.

When JPMC called to schedule an interview, Dame attended the interview with Robert Hall. He knew the next part of the process would be the background check. Dame testified he told Jaga someone from JPMC called and said he should come in for a background check; Dame encouraged him to go because maybe it would turn into a job. He still did not tell Jaga he had applied for a job in his name.

he never knew Dame used his information to apply for a job at and work for JPMC. When he got a call to come in for a background check, he thought it was `weird,’ but his resume was on the Ohio State University career services' website and he thought perhaps JPMC contacted him in connection with that. He thought he had nothing to lose by going in for the background check even though at that point he had never applied for any position with JPMC.

The same day he was photographed and fingerprinted, he received an offer letter in the mail from JPMC offering him a job. Jaga testified he thought about taking it, but he was already going to school and working a different job, and it would be too many hours. He claimed he called `a woman’ at JPMC and turned the job down.

Jaga speculated at trial his brother set up a series of phone calls to make the possible job scenario more believable so it was more likely Jaga would go in for the background check. Jaga testified he never saw any paychecks in his name from JPMC, and never gave Dame permission to use his driver's license or any other information. He testified the evidence regarding the JPMC hiring process is not accurate because he was hired there in June 2011 without interviewing with any JPMC manager.

Notwithstanding the above testimony, the Court of Appeals was “unable to find” that the jury “lost its way and created such a manifest miscarriage of justice” that the conviction should be “overturned and a new trial ordered.”  State v. Cisse (1), supra.  It based that finding, at least in part, on the following:

[Jaga] argues there is no evidence [he] knew of Dame's scheme of identity fraud, but we disagree. Jaga admittedly went to Polaris Parkway for the background check; he claimed it was `weird’ because he never applied for a job with JPMC, but he went nevertheless. The jury was free to believe him or not. The weight of the evidence and the credibility of the witnesses are determined by the trier of fact. . . .

The jury also had the evidence of the paychecks payable to `Ndiaga’ signed over to Dame and the fact that the brothers lived together for months while this scheme went on despite Jaga's claims of ignorance. Dame was also able to access Jaga's driver's license and other identifying paperwork, although both claimed Jaga did not give him permission to do so.