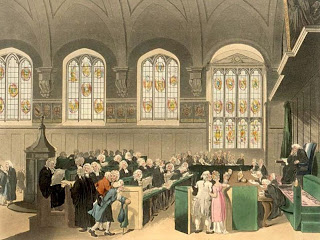 This post isn’t about a case that’s particularly significant or controversial. It’s about a case I found amusing, in one particular respect . . . and I think there’s room for the occasional amusing-case-blog-post. I hope you agree.

The case is Jennings v. Jennings, 2010 WL 4968060 (Tennessee Court of Appeals 2010), and it arose from the divorce proceedings between Joni Lynn Jennings and Mark Allen Jennings. The two divorced in 2007 and Joni

was named primary residential parent of the parties' minor child. Thereafter, the parties filed cross petitions for orders of protection. In May 2009, the parties entered a document styled `Consent Injunctions’ in the Shelby County Chancery Court, which provided in relevant part:

`In an effort to resolve [the petitions for orders of protection] without further litigation, the parties agree and the Court enters an injunction as follows: . . .

Each party is enjoined from telephoning, contacting or otherwise communicating with the other, either directly or indirectly, except as provided herein. . . .

If either party violates this Order, that party may be held in contempt of court and punished by incarceration in the Shelby County Jail.

petition for contempt and scire facias in the chancery court claiming that [Mark] had violated the Consent Injunctions by sending a July 22, 2009 email which did not relate to the parties' child and which she alleged constituted stalking, in violation of the injunction. [Mark] filed a counter-complaint for contempt and scire facias against [Joni], alleging harassment through phone calls, notes and e-mails, as well as unwelcomed visits. Following a hearing, the chancery court entered an order finding [Mark] in criminal contempt and dismissing his counter-complaint against [Joni].

The chancery court’s order provided, in part, as follows:

Based on the evidence introduced in this matter, the Court finds that Defendant Mark Allan Jennings is guilty beyond a reasonable doubt of criminal contempt for violation [of the Consent Injunctions] order.

Specifically, the Court finds that Defendant Mark Allan [Jennings] sen[t] an email with the following text to Plaintiff on or about July 22, 2009:

Please remove the spyware from your computer. After you do that please change all of your passwords. I got everything I need and don't forget to remove your ad with Mommies in Memphis looking 4 roommates.

P.S. It's what you don't say that hurts me and I don't believe you ever will say it. That is why I pray for you.

Jennings v. Jennings, supra. Having found Mark in criminal contempt, the chancery court sentenced him to

10 days imprisonment, suspended, and after finding the parties' child in custody of the paternal grandmother, it modified the Consent Injunctions to prohibit any future contact between the parties unless either party regained custody.

[Mark] points out that he did not sign the Consent Injunctions. He claims Mitzi Johnson, who signed the order as his counsel, was without authority to do so because she only represented him in juvenile proceedings, and not in chancery court. However, [he] cites no direct evidence limiting Ms. Johnson's representation to juvenile court.

Instead, his argument is based upon a lack of evidence. He claims the record does not contain [her] notice of appearance of counsel, and that with the exception of the Consent Inunctions Ms. Johnson's signature does not appear in the record. He further claims the chancery court's docket sheet does not reference Ms. Johnson as ever representing [him] with regard to the Consent Injunctions, but provides no citation to the `docket sheet’ and we are unable to find such document within the record.

From our review of the very limited record, we find no indication that [Mark], prior to this appeal, challenged either Ms. Johnson's authority to sign the Consent Injunctions or the court in which it was filed. In fact, it was for alleged violations of the Consent Injunctions that [he] filed his counter-complaint for contempt against [Joni]. . . .

After noting that it is “`well established that the appellate courts of this state will not entertain issues raised for the first time on appeal’”, the Court of Appeals held that because Mark failed to “challenge Ms. Johnson's authority to sign the Consent Injunctions or its entry in chancery court, and because [he] has failed to provide sufficient evidence from which to review these issues, we find the Consent Injunctions order was properly entered.” Jennings v. Jennings, supra.

Originally, Mark also argued “that the trial court lacked sufficient evidence to find him guilty of criminal contempt beyond a reasonable doubt”, but later backed off on that argument. Jennings v. Jennings, supra. In his reply brief, he “conceded `that the record is void of any transcript or statement of evidence,” which meant that a review of the chancery court judge’s “`factual findings [was] not possible.’” Jennings v. Jennings, supra. He still, though, argued that the Consent Injunctions were not properly entered, which meant his criminal conviction could not stand, but the Court of Appeals found “this issue without merit” based on what it had already found with regard to the Consent Injunctions. Jennings v. Jennings, supra.

Finally, Joni had asked the court to require Mark to pay her attorney’s fees in connection with the appeal in accordance with a Tennessee statute that lets a court award such fees if it finds that an appeal “was frivolous”. Jennings v. Jennings, supra (quoting Tennessee Code § 27-1-122). In deciding whether to grant her request, the Court of Appeals noted that Mark’s “initial brief [on appeal] was filed pro se” and took into account the fact that pro se litigants tend to have no legal training and little familiarity with the judicial system. Jennings v. Jennings, supra.

When I said I found this case amusing, I obviously wasn’t referring to the friction between Mark and Joni. I don’t find their post-marital discord amusing in the least, and can’t imagine that anyone would.

What I found amusing is that after Mark had apparently used spyware successfully – and surreptitiously – for some period of time, he found it necessary to inform Joni as to what he’d done, and what he’d learned. . . which turned out to be a pretty bad idea. . . .

(Oh, and if you're wondering what the photo is, it's of a historic English Chancery Court.)

Uhm, it's not clear from what you post that the spyware he is referring to in his email was earlier implanted by him. Could you elaborate on this? thanks.

I'm assuming he planted it. . . otherwise, how would he know it was there? . . . and why would he say he got everything he needed?

Dunno, I am not american so I may have understood incorrectly but I can see many different explanations.

Also, I assume that if he was the one planting the malware he would have been prosecuted for THAT much more than for the stalking thing, no?

I read it like: "remember to clean your computer, as you remember we have seen it might contain spyware [*since it was slow or was having any other strange behaviour usually related to spyware].

Also you may procede in changing all the passwords since I won't need it anymore."
And it makes more sense this way to me, since if he used a trojan to get his stuff he would have needed no passwords at all.

Also, the tone of that email doesn't sound aggressive to me. And that's where I ve found the whole story to suck.

He was being gentle, even if he was going against the court order, so she was very nasty to report it.

Or maybe he may have planted the malware himself earlier in the story but at the point he wrote the email it's obvious they are talking about something they both know about.

I dunno, it simply sounds too illogical to me the way you are saying it.

my 2 cents, and I'd like to know what really happened :)

This is amusing...I actually know the parties involved and had the bad experience of being Joni's first husband. We're still battling in court...but I'm winning.

Also, who is going to win in your upcoming divorce in Brain Leach vs Holly Leach? Certainly not the kids, they never win in cases like these..

So who do you think is going to win in upcoming battle of Brian Leach vs Holly Leach in Fort Smith, AR. Certainly not your 3 kids, they never win in these types of cases. You might want to take a good look in the mirror huh bud!

I have a question for you Susan. Do you think someone would have a strong cival case againist someone who secretly took photos of a person and posted them on Facebook to make fun of them? Say this person was seeing a counselor about the issue and could prove the emotional harm it caused. This person also has witnesses to back up the story and the person whom is being accused of such actions. Thebaccused also admitted to the court of law in another matter that they did in fact post such photos at a request from an ex friend to do so.

I've known both parties for years! This doesn't scratch the surface of things Mark has done. Joni is a wonderful person.. one of the best mothers I've known to date.. and one of the strongest woman I know. In the end, she'll be blessed with all the love and happiness she deserves. Go Joni, never give up. The truth always comes out!